On October 23, the Kincade Fire broke out near The Geysers in Sonoma County, burning more than 120 square miles over two weeks before it was finally 100% contained. As has become standard practice in these types of fires, hundreds of IBEW 1245 gas and electric crews were quickly dispatched to the scene to make the area safe and begin restoration work.

The gas service workers arrived first, with about 500 PG&E employees and 100 mutual assistance resources from SoCal Gas and Southwest Gas working to first shut in, and subsequently restore, gas service to approximately 25,000 customers throughout Sonoma County.

“We were told there were some reg stations in the fire zone, and if they were damaged, it could have resulted in serious over-pressurization. So the company erred on the side of safety, and chose to shut in,” explained six-year IBEW 1245 member Garrett Markwood, who works as a gas service mechanic out of PG&E’s San Rafael yard.

Markwood’s group was initially tasked with shutting in gas in the Cloverdale area, and then restoring service in that same area while other M&C and GC Gas crews shut in service in the other effected parts of the county. Markwood eventually ended up working on restoration in the other areas as well. His team was on site for just about seven days.

“It was all pretty standard for any outage. Long hours, unexpected delays, and a customer base that’s eager to get their lives back to normal,” said Markwood. “Combine all that with the natural starts and stops, and it makes for a complicated week.”

“Right in My Backyard”

As the gas work was wrapping up, the electric crews started arriving to begin the arduous work of replacing and repairing hundreds of burned and damaged poles in and around the footprint of the fire.

PG&E Electric Crew Foreman Scott Schweikl has worked on nearly half a dozen fires over the 16 years he’s belonged to IBEW 1245, but this particular one hit quite close to home — the Geyserville yard that he works out of was included in the fire evacuation orders. 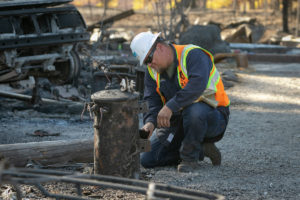 “This is my service area… it’s right in my backyard,” Schweikl told the Utility Reporter. “We had kind of the same situation two years ago with the Tubbs Fire. It’s touching close to the same area, same conditions, same results. Unfortunately, it’s something that we’re dealing with more and more.”

When the Utility Reporter caught up with Schweikl and his crew, they were working to replace a burned utility pole in in the city of Healdsburg, adjacent to the Field Stone Vineyard, which was heavily damaged by the fire.

Schweikl explained some of the unique challenges that come along with working in a fire zone.

“I’ve got a burned up excavator right next to my pole, and all the other burned up cars and trucks and parts and stuff like that,” he said, gesturing to the remnants of several vehicles.

Looking Out for Each Other

In total, 1,400 PG&E personnel were on the scene. IBEW 1245 also had union staffers on site to ensure things went smoothly, assisting members with issues as they arose. 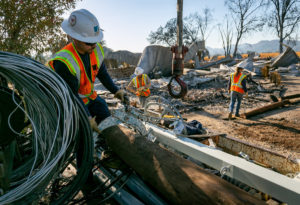 “The primary benefit of having the union in this situation is that we don’t have to worry about being compensated correctly for the work we perform, because the union has already negotiated the terms — so we can focus directly on the work we’re here to do,” said Markwood. “We’ve got shop stewards and business reps making sure everyone is being treated the way they’re supposed to be. If not for the union, I’m sure the situation would have been a lot different up there.”