New technology is rapidly changing the nature of work in many industries, and the utility industry is no exception. Rather than resist these changes, IBEW 1245 is working diligently to stay ahead of the curve, striving to protect our members and their work as automation becomes increasingly more popular. 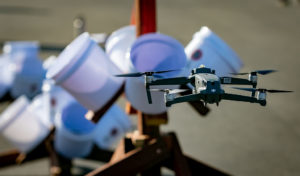 UAS, also known as drones, are being used by utilities all across the nation.

One new technology that’s been gaining traction amongst utilities is the use of unmanned aircraft systems (UAS), or drones. Increasingly, utilities are using drones for routine and emergency work that has traditionally been completed by IBEW members, including patrolling lines, helping to determine causes of outages, examining poles, insulators or connectors, and finding access points in remote locations. While some of this work will continue to be done by ground transport and helicopter, utilities are beginning to favor drones as they are able mitigate challenges posed by no-fly zones, reduce costs, and reduce environmental impacts. 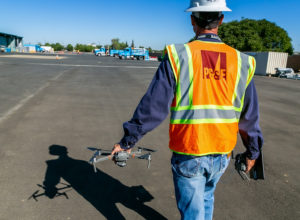 Many utilities in California and beyond are outsourcing drone operation, and there has been significant non-signatory contractor drone usage occurring on PG&E property all year with the Tier 2 and 3 WSIP inspection program. IBEW 1245 feels strongly that this work belongs to our members, and the union has been working for several years to get our own members trained as drone operators so we can bring this work back in-house. In 2017, IBEW 1245 sent 12 members to a drone pilot prep course in Michigan, to prepare them for the FAA Part 107 Drone Certification Test (at the time, FAA 107 courses were not readily available locally). Those 12 members all passed their FAA 107 exams and earned a two-year licensed drone operator certification, which have since expired for most of the participants (one member from PG&E did renew his certificate on his own).

Since that training, IBEW 1245 has been working with PG&E to establish a similar type of training program here at home, to enable more 1245 members to get the credentials they need to operate a UAS for the utility. It took some time, but finally, in October of 2019, we succeeded in launching a first-of-its-kind, in-house drone operator training at PG&E. 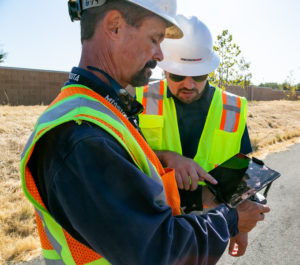 UAS Program Manager Robert Henley led the initial “beta” training session for a dozen IBEW 1245 members. The 40-hour course, which took place at the Gas Safety Academy in Winters, included 15 hours of actual drone flight time, and prepared members to pass four requisite tests by the end of the week.

“This is a basic skills class designed for everybody in PG&E, regardless of their line of work,” Henley explained. “We have transmission towers out here for practice, but those skills that we’re training will translate to whatever role they have within the company.”

The members who were selected to attend this initial training were already certified drone pilots, but lacked hands-on experience and knowledge of utility-specific protocol. During the training, they learned to fly and stead the drones to take precise site photographs, focusing on an area as small as one inch, using regular and thermal cameras. Just as important, they learned the drone software, standard operating procedures for PG&E, and an understanding of the FAA airspace regulations, weather effects, and other key elements that drone operators must take into consideration before and during a flight. 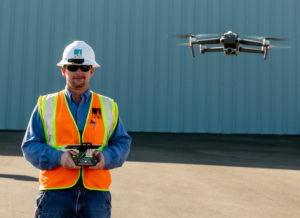 “I could see value in patrolling lines, and potentially looking at causes of outages and getting a different perspective to look at a pole, or a transformer or a connector,” said PG&E Electric Troubleman Jimmy Webb, one of the 12 members who participated in the drone training. “This is not only about getting good pictures, but it’s doing it safely for us and the public … Limiting our exposure to any potential hazards, whether it be customers, environmental, poison oak, whatever it could be. I see value just all the way around.”

Henley also stressed how a drone can be used to improve safety and reduce response times: “It eliminates climbing risk. It’ll allow our employees to get into regions to keep them out of harm’s way. There could be obstacles, there could be landslides, they could fly over canyons to get pictures. It’ll help us with our Public Safety Power Shutoff restoration.” 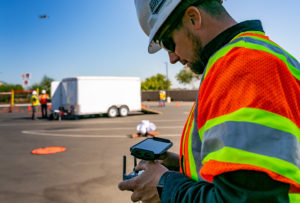 Creating opportunities for our members to be on the forefront of this new technology is one important way IBEW 1245 is ensuring workers are gaining valuable skills that will secure their jobs for years to come.

“We have had concerns for classifications that do various type of infrastructure inspections that drones could diminish some job security. This is an example of looking to the future to try and provide job security for those jobs,” said Assistant Business Manager Bob Gerstle, who has been spearheading the effort to bring drone operation in-house for years. “The hope is that those members will soon be part of a comprehensive pilot program through the end of March 2020. Learnings from the pilot program will be used to establish a full-fledged drone program.” 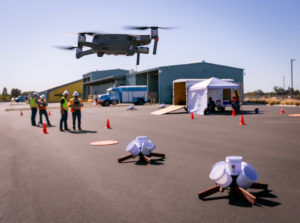 Webb underscored the union’s role in bringing this program to fruition.

“The union has absolutely pushed to the forefront that this is a tool and not a toy, and it’s something that can increase the safety factor of all employees,” he said.