In November of 2018, the Camp Fire ravaged Butte County, claiming 85 lives, leveling the town of Paradise and demolishing more than 18,000 structures, including the homes of close to 100 IBEW 1245 members. In the wake of the deadliest and most destructive fire in California history, our dedicated members were among the first on the scene, and they stayed for several months thereafter, performing critical safety work – assisting first responders by restoring electricity wherever possible, capping gas mains, clearing downed power lines, and hauling off debris. 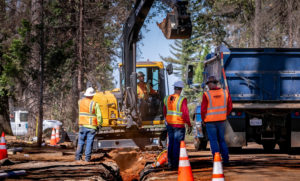 IBEW 1245 crews from PG&E and contractors work to rebuild Paradise after the town was leveled by the Camp Fire in late 2018.

Now, less than a year later, many of those same crews from PG&E, along with a number of IBEW 1245-represented contractor crews, are back in Paradise to begin the arduous, multi-year process of rebuilding the once-charming mountain town. The first step of the project involves replacing 74 miles of damaged natural gas lines and using those same trenches for new electric and telecom service lines.

“Before the fire, everything was overhead, but now they’re going to put it all underground,” explained GC Gas Foreman Ken Power, who was sent up to Paradise from the Rocklin yard. “We’re replacing the gas main, which is old and needed to be replaced anyways, but since it got burned, they had to cut it off. So now we were putting in good, new gas pipe.” 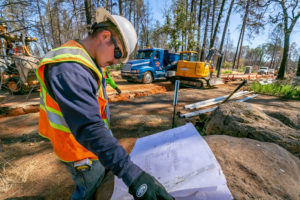 Dallas Cooper looks at the plans for the underground work.

According to Power, the crews are digging a main line trench at around 48 inches, putting in the four-inch primary electric line at the bottom, and a three-inch secondary on the other side. Then they’ll throw down some sand before the communication layer, which will include AT&T and Comcast lines. The two-inch gas line goes in last, and once all of that is complete, they’ll be able to run service into residences, starting with the few that are still standing, and eventually to others that are to be rebuilt. 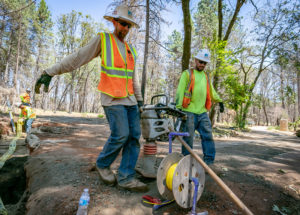 When the Utility Reporter caught up with Power and his crew, they were working 12-hour days, seven days a week, in grueling late summer heat, with temperatures often exceeding 100 degrees. They faced other challenges as well – working in close quarters on exceptionally narrow roads, remote worksites in desolate areas, and a mixed reception from the residents still living in and around Paradise.

“Some of the people are very hostile against us — they’re upset, and that’s understandable. But most of them are very nice,” said Power. “And some of them are in the daze. They’re confused because of what happened, and they’re still in shock from it.” 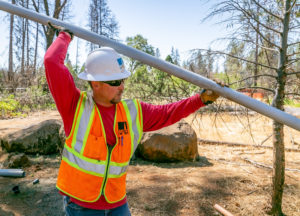 Thomas Wooten holds up a piece of conduit.

Power had previously worked in Paradise for about three months right after the fire. He returned home for a few months before being sent back up over the summer, and he plans to be there through at least the end of the year. Despite the challenging circumstances, Power and his crew are taking it all in stride.

“It’s work. It’s the same kind of stuff that we do all the time. It’s just a different environment and it’s a little harder to go,” he said. “But we’ve got more people up here now, and more equipment, and things are coming together faster.”