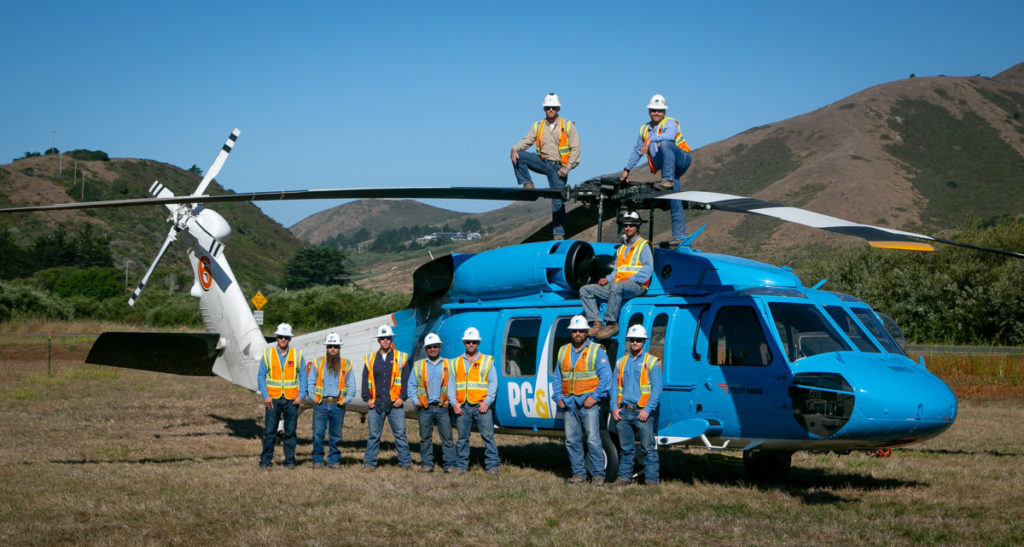 In the San Francisco Bay Area, everyone knows “Karl the Fog” – the tongue-in-cheek nickname that the locals have given to the unique coastal atmospheric conditions that result in a thick blanket of perennial low-lying cloud cover. Karl the Fog can turn even the sunniest and warmest of summer days into a dark, chilly afternoon in just a matter of minutes, and is likely the impetus behind the age-old adage, “The coldest winter I ever spent was a summer in San Francisco.”

Thanks to Karl and all his moisture, metal structures near the coast tend to rust and degrade more rapidly – and for a perfect example, look no further than Sausalito, a small coastal community just north of the Golden Gate Bridge where 10 PG&E transmission towers have recently been A tagged for immediate replacement. These 10 towers are part of the 60KV line that services all of Sausalito, so before they can be wrecked out and replaced, a shoo fly needs to be constructed to ensure uninterrupted service for Sausalito’s residents and visitors. 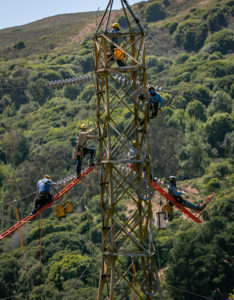 In late August, the Utility Reporter caught up with the IBEW 1245 transmission line crew from PG&E that’s been tasked with constructing the shoo fly. According to PG&E Crew Foreman and 22-year IBEW member Andy Contreras, the job came with its fair share of hurdles – not the least of which is Karl himself.

“Karl likes to come in during the summertime and sit in the mountains right on the ridge where the line is being built and not move all day long. I think in the month of July, we probably worked one-third of the days, and the other two-thirds of the days, we were fogged out. Since June 20th I have not seen three days of sun without fog here,” Contreras explained. “So it’s been very difficult to plan and build the schedule around the fog. There were some days that the fog didn’t clear till two o’clock, and the helicopters would come in and land and we’d start work at three o’clock in the afternoon and work till six or seven o’clock at night.”

In addition to Karl, the crew has also had to contend with the challenges associated with the line’s unique location.

“The shoo fly and the 10 towers are all in the Golden Gate National Recreation Area (GGNRA) … In my 22 years, this is the most sensitive area I have ever worked in,” said Contreras, explaining the delicate nature of utility work in such protected spaces. “They have sensitive flowers, grasslands, oak trees. Every day we have a biologist with us at every location. We have to check in at a gate. Our truck’s got to be washed — they get inspected to make sure we’re not transporting any weeds from other places. And we have to spray our boots with peroxide, so we don’t track anything in.” 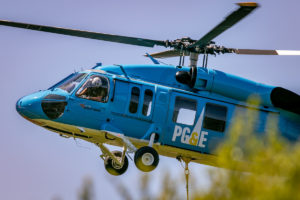 The crew relied on choppers to transport materials, supplies and workers

Getting materials and equipment in and out of the GGNRA was a challenge in and of itself, as basically everything needed to be transported via helicopter. The famously scenic park is heavily trafficked with tourists and locals alike, especially during the weekends, and the choppers are prohibited from flying on those busy days. To keep the park visitors safe, the crew has had to shut down multiple trails while the choppers are flying in and out during the week, with 10 traffic controllers stationed on the trails to ensure no members of the public entered into the work spaces.

Due to these extenuating factors, and Karl in particular, the shoo fly took a bit longer than expected, but Contreras was hopeful that the clear weather would hold and allow his crew to finish up their work within a few days, so that the tower replacement could begin.