To keep the Labor Movement strong and thriving for years to come, we must continue to grow our ranks by organizing workers who wish to unionize with the IBEW. In fact, the IBEW Constitution states that the first objective of our union is “to organize all workers in the entire electrical industry in the United States and Canada, including all those in public utilities and electrical manufacturing, into local unions.”

This is, of course, much easier said than done. Union organizing campaigns can be lengthy, contentious, and difficult, and they are often fraught with aggressive opposition from the employer and any number of other anti-union entities. Conducting a successful union organizing drive takes dedication, commitment and thick skin – as well as a wealth of knowledge and a unique set of skills. 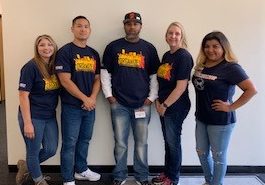 This summer, four IBEW 1245 organizing stewards had the exciting opportunity to acquire this critical union organizing knowledge and skillset at the AFL-CIO’s Organizing Institute, which took place in Oakland in mid-July. Organizing Stewards Cynthia Lopez, Dana Johnson, Brandon Fosselman and David Ly attended this intensive three-day training, and Lead Organizing Steward Nilda Garcia served as one of the trainers.

“I didn’t know what to expect coming into the training, but I kept an open mind and planned to go in there and absorb as much information as possible,” said Fosselman. “I was blown away by the training, the trainers, and a number of my union brothers and sisters who attended the training.”

The action-packed training highlighted the many hurdles that union organizers must overcome – both from external forces including the Supreme Court, ALEC and anti-union lawmakers, as well as opposition within the workplace, including hostile management, employer-sanctioned union-busters and other naysayers. They learned how to open up discussions about union organizing with non-union employees, how to cultivate and communicate with organizing committee leaders, and how to work with them to facilitate a successful union election. 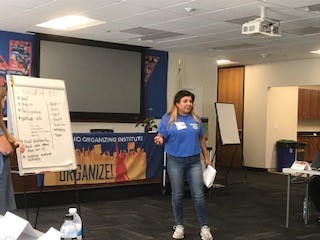 Nilda Garcia served as an instructor at the training

“This training really helped me become a more effective communicator. The one thing that stood out to me most during training is in order to get down to the root of the issue, one must know how to ask proper open-ended questions, make it about the individual we’re talking to and their concerns,” said Organizing Steward David Ly. “I believe this will help me tremendously in future campaigns.” 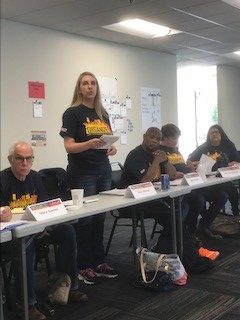 “At this training I was able to stand and be a leader in a different way than I have been before,” said Organizing Steward Dana Johnson. “I’m very proud to be a part of this amazing group of people, and I’m honored that I was able to learn from some of the best.”

“Wow, wow, wow! How can I express my gratitude from giving me the opportunity to attend this wonderful training!” said Organizing Steward Cynthia Lopez. “I was able to make friends from all over the nation and learn so many techniques and skills to be successful. I’m inspired, I’m humbled and I am excited. Looking forward to what the future holds!”