When Marine Corps veteran and 22-year IBEW 1245 member Kenny Meyer returned to his job at PG&E in 2006, after serving two tours of duty — first as Homeland Security, followed by a combat mission in Iraq — he wasn’t the same guy that his co-workers once knew. He was angry, moody and sleep deprived, and even the slightest thing could set him off. He had trouble remembering and concentrating, he kept bumping heads with his supervisor, and he was really struggling, not just at work, but at home as well. 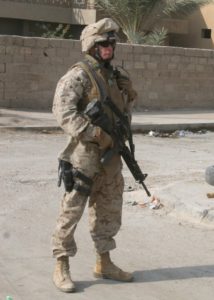 Kenny Meyer, during his tour of duty in Iraq

Meyer was diagnosed with a traumatic brain injury (TBI) stemming from the five IEDs he had been hit by in Falluja, and he assumed that the TBI was the root cause of all his issues. His doctor had also told him that he has Post Traumatic Stress Disorder (PTSD), but Meyer brushed it off.

“Back then, I thought that PTSD was for sissies, an excuse that people use to get out of doing things they don’t want to do. That’s the stigma that I had put to it,” Meyer recalled. “I told the doctor, ‘I don’t know what you’re talking about, I don’t have PTSD. I can deal with my issues.’”

As a Marine, Meyer prided himself on being tough and independent, so he refused to get help for his PTSD, and continued to struggle with the condition, untreated, for nine long years. At his lowest point, he was exceedingly close to losing his job and his family. He contemplated running away from it all, leaving the career he once loved, as well as his wife and two young sons, because things had gotten that bad. But an interaction that he overheard between his kids changed the course of his life forever.

“One day, I heard my little boys talking, and they didn’t know that I could hear them. My youngest boy told his older brother that he’s scared to death of daddy, because daddy is so mean and violent, and he doesn’t want to be around daddy. That broke my heart,” Meyer choked up with emotion as he recounted the complete breakdown he had at work the following day. “That’s when I knew that something was wrong with me, and that’s when I reached out to get help.”

Meyer went to the Veterans Affairs Hospital (VA) and entered an intensive treatment program for combat vets with PTSD. At first, he was skeptical, but after working with a psychiatrist, a psychologist and a counselor three days a week for almost three years, Meyer finally started to feel like himself again.

“It was a hard road, and I’ve learned a lot of things… but I’d consider myself a success story with PTSD,” he said, noting that while he will never be cured of the condition, his treatment helps him manage it so he can once again excel at work, and be the husband and father his family deserves.

“We need to help each other out”

When he returned to work, Meyer apologized to his supervisor and explained what he’d been going through. His supervisor apologized too, because he didn’t realize that Meyer had a medical condition and needed treatment. Word got around about Meyer’s experience, and soon other supervisors were asking Meyer what they should do about veterans on their crews who were also having trouble. That gave Meyer an idea.

He contacted Joyce Ibardolasa, PG&E’s Director of Performance and Inclusion, and asked if they could work together to develop a PTSD awareness pilot program for supervisors. She jumped at the idea, knowing that it had the potential to help veterans in the workforce and reduce stigma around PTSD and other mental health conditions.

“We know that there are other people at PG&E who are struggling just like I was. Instead of assuming that person is a bad employee, a troublemaker, not worth anything … We need to help each other out when we see somebody struggling,” said Meyer. “We’re all a big family here, and I want the leadership in PG&E to be able to recognize the signs and symptoms of PTSD so they could reach out to try to help their employee, and not [inadvertently] hurt or hinder their employee.”

Meyer asked his therapist from the VA, Kira Serna, to help lead the workshops, and before long, Meyer, Serna and Ibardolasa were standing in front of a room full of 60 supervisors from substation maintenance, talking about PTSD. The first “Warrior to Workplace” session, which was held in 2018, was incredibly well-received, and the feedback from those who attended underscored that everyone at the company – not just supervisors – could benefit from this knowledge. Soon other workgroups started calling for the workshop and they began holding sessions all over the system for both supervisors and the rank-and-file.

On the day that the Utility Reporter caught up with Meyer and his team in Walnut Creek, they were leading their seventh session of the year, presenting to about 20 employees from substation maintenance, all of whom had volunteered to attend, and only one of whom had personally served in the armed forces. Michael Coyle from PG&E’s Performance and Inclusion Department kicked off the session (Ibardolasa was on vacation that day), and then Meyer shared his emotionally charged personal story, including the remarkable turnaround he’s experienced since seeking treatment. Serna talked about the stigmas and strengths associated with being a veteran in the workforce, and then dove into a thorough overview of PTSD. She highlighted some of the most common symptoms to look out for, explained the neurobiology behind PTSD, underscored red flags (including warning signs of suicide), and detailed the best practices for intervention by creating an environment of safety. The session concluded with an overview of the company’s employee assistance program and other resources that are available to help workers who are struggling with PTSD, but Serna let the attendees know that even if someone isn’t ready to pursue treatment, just being there for a co-worker who is going through PTSD can have an enormous impact.

“You can be a part of changing someone’s life,” she emphasized to the attendees. “Professional support is great, but peer support is so much more powerful.”

“Our brothers’ and sisters’ keepers”

In recent years, PG&E has been striving to increase the number of veterans it employs, with a goal of having 9% of its new recruits coming out of the armed forces. And there’s a reason for that, according to Meyer. 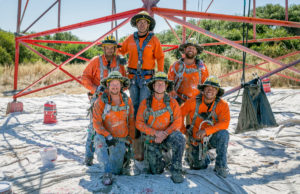 Meyer, front row center, with his I&C crew on a tower painting project in 2017. Photo by John Storey

“Veterans are some of the best employees you can get. They’re good followers, they’re good leaders and they are highly trained individuals. They’re very loyal and team driven,” said Meyer, who is an I&C working foreman B, but is currently on a temporary assignment as a T-line supervisor. “But anybody can get PTSD, not just veterans. We’re seeing it more and more, especially now with the all the wildfires and people losing their homes.”

“Through this program, my hope is for people to just have more empathy, to do a little bit more for somebody that is struggling with PTSD. Because it is a real thing,” Meyer added. “It makes a safe atmosphere at work when you know you can trust and help your teammates out. We are all our brothers’ and sisters’ keepers — and if I can help even one brother or sister, I consider that a positive.”