As a member of the California State Assembly, Republican Brian Dahle raised more than a few eyebrows last year when he voiced his strong support of SB 901, the wildfire bill that IBEW 1245 advocated for in 2018. Dahle proved that he’s willing to stand with 1245 and take on the tough fights in defense of our members and the communities they serve, so when he announced his candidacy to fill the State Senate seat formerly held by Ted Gaines (who was elected to the Board of Equalization in November), IBEW 1245 was quick to endorse Dahle’s campaign. 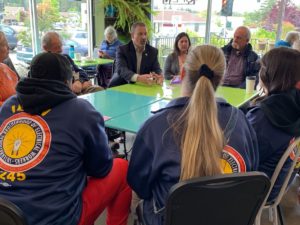 Dahle — who previously served as the Assembly Republican Leader and takes pride in his background as a farmer and small business owner — isn’t your typical labor-endorsed candidate. His party affiliation alone would likely cause many other unions to write him off entirely. But Local 1245 firmly believes that the key factor when determining whether a candidate should receive the union’s support is where that candidate stands on the issues that have the biggest impact our members. IBEW 1245 looked at Dahle’s track record on critical utility issues, and decided not only to endorse him, but also to dispatch a team of Local 1245 organizing stewards to work on his behalf for the special election. Additionally, Local 1245 advocated for the endorsement of Dahle at the Sacramento Central Labor Council, which allowed Dahle to amass far more labor support than his campaign had anticipated. 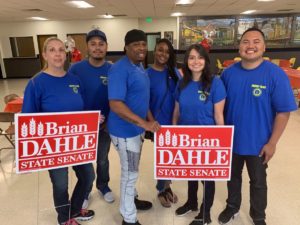 “The Sacramento Central Labor Council stepped in and helped manage the campaign, so our team was able to work directly with them,” Local 1245 Organizing Steward Vanessa Mejia reported. “We had a very successful phone bank at the Labor Council, with Brian Dahle making an appearance and even calling voters himself! It was a great turnout and I know it made a difference.”

While 1245 and the Labor Council helped coalesce union support for Dahle, running a labor-backed campaign for a GOP lawmaker wasn’t without its hiccups. Things got off to a bit of a rocky start, but Local 1245 quickly got Dahle’s team up to speed on what it means to be a union-endorsed candidate. Local 1245 staffers Hunter Stern and Rene Cruz Martinez worked with Dahle’s campaign manager and the LAbor COuncil to craft campaign literature that would appeal to voters of all parties (given that his opponent was also a Republican, Dahle’s ability to garner support from Democrats and ‘No Party Preference’ voters in the district could make or break the election). Local 1245 also helped to connect the campaign with a unionized print shop to make sure his campaign materials were union-made. 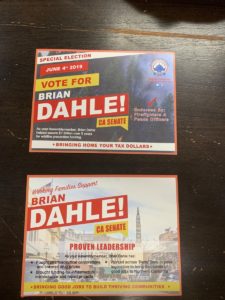 While Dahle’s opponent, Republican Kevin Kiley, was busy smearing Dahle for his support of SB 901, the Local 1245 organizing stewards were diligently working to get out the vote on Kiley’s home turf in Placer county.

“The campaign was impressed of the rate of precincts we were completing and the effectiveness of the new literature,” said Lead Organizing Steward Alvin Dayoan. “We were able to speak to more people at the doors and have effective conversations on why it is important to gain their support for our candidate.” 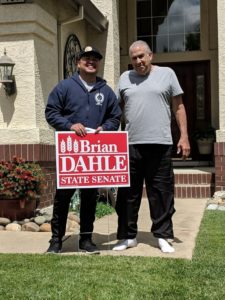 Alvin Dayoan delivers a lawn sign to a Dahle supporter

“It was a huge surprise for me to see how much the union does for the candidates, and how much the organizing stewards do to make [the campaign] a huge success,” said new Organizing Steward Dana Johnson, who also happens to be a registered Republican. “I learned so much.” 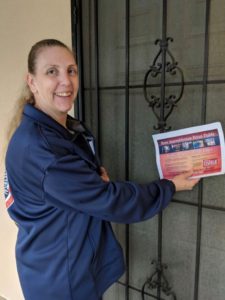 Dana Johnson drops some campaign lit at a voter’s door.

The 1245 team, which was comprised of both Republicans and Democrats, willingly set their party affinities aside to support the most pro-union candidate in the race.

“I must say when telling my family about this campaign I did get a little backlash, but one thing I had to explain is that Brian Dahle definitely helped us out with the SB 901 bil,l which helped save my job and many others, and for that reason alone I decided to accept the challenge of working this campaign!” said Organizing Steward Bridgette Thomas. “[On the campaign] I was challenged to have those tough conversations when approaching a home full of Democrats … but educating the voters on what he stands for is key. Not to mention he’s for the working people, and he works across party lines.” 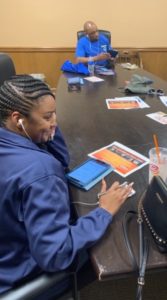 “The Dahle campaign was definitely something new for me; never did I think I would find myself out canvassing for a Republican!” echoed Organizing Steward Ramon Gonzalez. “It was a good experience however, because we got to gauge what all voters feel, not just Democrats.”

The special election was held on Tuesday, June 4, and once all the votes were counted, Brian Dahle took the win with a little over 53% of the vote, while his opponent garnered just under 47%. A total of 132,815 ballots were cast, which is an outstanding turnout for a special election held with relatively short notice.

“The big win came from the areas where our organizing stewards put in the work,” said Staff Organizer Rene Cruz Martinez, who served as a liaison with the Dahle campaign and helped coordinate the 1245 campaigners. “Dahle’s campaign was not optimistic that we would be able to win, as his opponent was supposedly the heavily favored candidate, especially in Placer county, which is where we spent a lot of time getting out the vote. Dahle ended up getting 39% of the vote in Placer, where Kiley was expected to take 80% of the votes.” 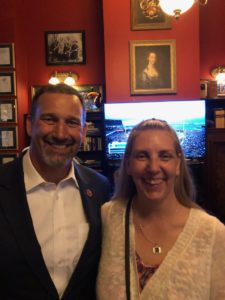 Dana Johnson (right) with Dahle shortly after he was sworn in

“This campaign is a true demonstration of the influence and power that organized labor brings to the table, and is a great example of how we can work across party lines to help those politicians who are friends of labor,” Cruz Martinez added. “I am glad to have been part of this campaign, where I was able to look outside of party politics and learn from the other side.”