When a person is gravely ill, an emergency response team is quickly dispatched to the scene to bring that individual to the hospital. Interestingly enough, when a PG&E transformer is no longer operating as it should, the experience is somewhat similar. But in this instance, the emergency response team is a utility line crew – and the hospital is a specialized equipment repair facility staffed by a highly skilled team of IBEW 1245 electricians.

Many of PG&E’s “sick” transformers and other equipment will end up being triaged at the company’s Emeryville Repair Facility, which in some ways resembles a hospital intensive care unit – except the patients are all out-of-service equipment and parts.

First, the equipment is assessed by an electrician, who will run several tests on it to determine what went wrong. If it’s something fixable, the IBEW 1245 members at the shop take the necessary steps to repair it so it can go back into circulation – ostensibly giving old equipment a new lease on life.

When the Utility Reporter visited the repair shop in May, PG&E Electrician and 12-year IBEW member Orlando Morfin was working on an out-of-service transformer with a suspected leak that had been brought down from Santa Rosa. 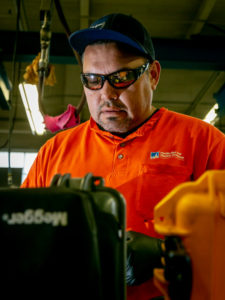 “I just finished the TTR [transformer turn ratio] testing, to make sure that it converts the voltage from the lower voltage to the higher voltage, and to check for any kind of grounds on the high side, the low side,” Morfin explained. “So, I tested it to make sure it’s good, and the next thing I’ll be doing is checking for leaks… I’ll pressure test it and put air into it, and if it’s leaking, and then I repair the leak. Sometimes it’s a bushing. Sometimes it’s a sight glass. Sometimes, it’s the fuse bayonet. It all depends.”

Transformers aren’t the only equipment that get serviced by the team at the shop. All sorts of components are fixed up here – and if the electricians need a part to perform a repair, their colleagues over on the machine shop side of the building are ready to pitch in.

According to PG&E Machinist and IBEW 1245 member Jayson Gavaldon, when PG&E needs a part that’s not readily available, he and he colleagues will be tasked with fabricating it. When the Utility Reporter caught up with Gavaldon at the shop, he was working on some small gas components, and he says he is often tasked with these types of odds and ends. 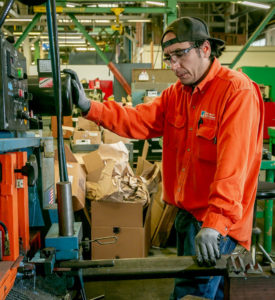 “I get everybody’s flex connectors, everybody’s little target jobs that are put-in-a-bolt-in-a-bag, that’s me,” said Gavaldon. “They just give me the blueprint and I make it to the spec.”

And over in the carpentry shop, IBEW 1245 members fulfill the company’s wood-based orders. According to PG&E Carpenter Michael Deschaine, back in the days when the company had a fully operational foundry, the carpenters would be tasked with patterning, molding and casting for substations, specialty projects and whatever may arise in the field. But times have changed, and the work has changed too. 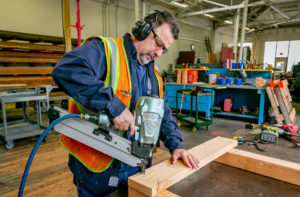 “Most of the work now we do now is related to preparing equipment for shipment — to go to the yards, and out in the field,” said Deschaine, who has been at the shop for 36 years. “So we’re building skids for heavy pad mount equipment, beefing up stuff for pole vaults, things like that.”

The Emeryville shop is one of PG&E’s oldest facilities – it’s been up and running for 95 years, and while the work that’s gone on inside of it has changed dramatically over the years, the hard-working individuals who take on these tasks remain grateful to have IBEW 1245 looking out for them.

“The union fights for us any time we have a grievance, and they’re there whenever we have questions. They can also point you in the right direction if you want to promote yourself,” said Morfin. “And it helps with the bidding process to keep it fair, so if you want to transfer to another place or laterally, it helps you.”

“One thing I like about the union is we’re getting our benefits protected … And they fight to keep the wages up, so we don’t have to worry about making our bills every month,” said Deschaine. “We’re able to make a decent living here, and in today’s economy, that’s pretty good. I’d say that’s one blessing about having the union.”

“The union for me is a support structure,” added Gavaldon. “They’ve been great to me. I have no complaints.”