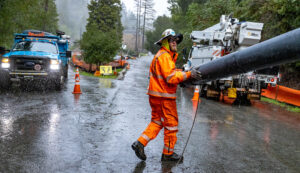 As the state began to recover from the deadly atmospheric river, several IBEW 1245 crews from PG&E outside line and vegetation management continued to clean up storm damage and restore power after weeks of severe inclement weather. Steep slopes coupled with dense forest and wet conditions made the areas of Felton and Ben Lomond incredibly difficult to work in.

With any jobsite, working safely, especially in precarious conditions, is priority number one when dealing with damaged trees and lines.

Tree trimmers from Davey in Felton

“The rough terrain (is challenging) and we’ve always got to watch for trees and mudslides,” explained PG&E Subforeman Shannon Spah. “The roads on the other side, where we’re going to go later, is really hard. Access is tight, especially for the trucks.”

PG&E Subforeman Lee Griffiths, a ten-year IBEW 1245 member, said in his experience other storm systems pale in comparison to this storm event. 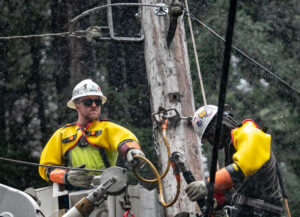 An outside line crew assisting with storm restoration in Felton

“This seems like the worst rain and winds we’ve had at once since I’ve been here.”

Spah, a thirty-one year member, who is also a current IBEW 1245 Shop Steward, knows the union has his back and is the only choice for him.