Sixteen-year IBEW 1245 member Chris Miles has joined the IBEW 1245 staff as a Business Rep. He will be working with outside line members in the Sierra, Central Valley, and South Bay areas. 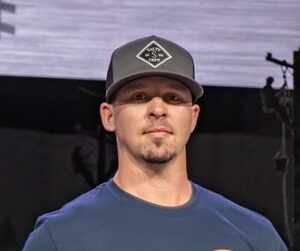 “The things I like about being a 1245 member is the personal interactions I have received throughout my career from the members. Everyone says this is a family or brotherhood and I can’t agree with that more,” Miles said. “Being a member has allowed me to experience things I never would have thought possible. From lineman rodeos, mutual aid, world-class training, and meeting friends who I consider family. I owe that to 1245 but mostly the fellow members.”

“I had two main reasons I wanted to join 1245. One being I have such a passion for the trade and the other is I honestly love helping people,” he added. “And from what I can find, this position is the best platform to incorporate the two.”

Brother Miles is a proud husband to his high school sweetheart and the father of two girls, ages 8 and 11. His family is very active in the community, volunteering at the local high school (El Dorado High School in Placerville) where his wife works and coaches volleyball. In his free time, he enjoys mountain bike riding, hiking, coaching his daughters in sports and boating in the summer.