The atmospheric river resulted in widespread flooding, mudslides, fallen trees, and other hazardous conditions with local news reporting 17 fatalities due to the storm events. 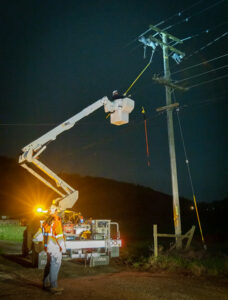 A local meteorologist reported that the 12.37 inches of rain that fell in San Francisco between December 26 and January 9 qualifies as the third-wettest 15-day period since 1849. Some areas south of Big Sur saw 6 to 8 inches of rain in a 24-hour period.

As most families stayed indoors to weather the storm, thousands of members assisted those in devastated communities. More than 597 IBEW 1245 crews, first responders, and mutual aid crews from eight states, coming as far as Wisconsin and Canada, have been working around the clock to restore power in the wake of the powerful storm system.

“The incredible men and women of IBEW 1245 have responded in horrible working conditions to restore power to their communities,” remarked IBEW 1245 Business Manager Bob Dean. “We should all be proud of them and their unending commitment.”

In the Outer Sunset District neighborhood of San Francisco, a PG&E crew was re-conductering a primary on a busy intersection. 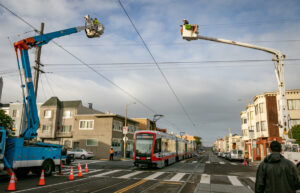 “There’s a lot of customers out of power. On this specific job, they’ve been out for two days,” said PG&E Division Lineman DJ Ebrada. “We don’t get hit by a lot of trees down here in the city. Most of our damages usually is from the flooding. When it’s overhead, it’s mostly equipment failure.”

As crews continued their restoration work in the city, another line crew was assigned to rebuild an entire line in South San Francisco, where the hilly terrain made the restoration work especially difficulty.

“This is all inaccessible and on a muddy, slippery, loose hillside,” said PG&E GC Subforeman Ben Benton. “If you put something down it rolls away. If you run wire out, it’s getting caught on trees and the tree branches love the wire. So, we’re having to make the trips back and forth from the pole 20 or 30 times because the amount of stuff that’s on the ground.”

Before the line crew could begin their restoration work, vegetation management crews were called to clear the worksite of potential hazards. 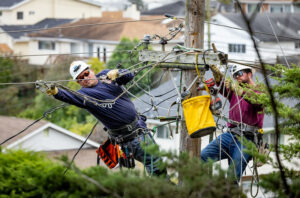 “Three trees took out the primary, secondary, and phone (line), and broke a bunch of cross-arms and services,” said Benton. “Vegetation cut three large trees that were down and probably close to 50 (trees) that were overgrowing on our easement.”

Benton and the skilled crew took it all in stride and set out to complete their task in a safe manner, ensuring that the poles and their infrastructure are sound for those who many climb the poles in years to come.

“We re-frame the pole, we put all new composite arms…we pull new wire, we change out the services that need them,” said Benton. “We try to never band-aid anything. We start with a brand-new foundation that’s going to last a long time because you never know who’s the next guy up this pole.”