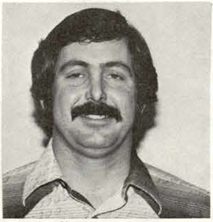 Ken Ball in 1981, shortly after he joined the union staff

Ken Ball was Exhibit 1 in a presentation of great grievance handlers of the past. Business Manager Bob Dean reflected on his experience with Ball:

“I was one of a whole generation of reps that Ken mentored,” Dean said. “He was the teacher, historian and enforcer of our grievance process.”

To some extent, Ken and my lives tracked each other until we ended up at Local 1245 in the early 1980s.

Ken was born in 1951 and grew up in Salinas.  I was born in 1951 and spent my twenties in Salinas, working for the United Farm Workers.  Before getting hired on at PG&E, Ken worked in the vacuum coolers that got cartons of iceberg lettuce ready for shipping.  The workers at the lettuce vacuum coolers where Ken worked were largely Anglos working at the top of the chain of workers who harvested lettuce.

We both knew, liked, and respected Jerry Breshears, the president of United Fresh Food and Commercial Workers, Local 78.  Like almost everyone in the lettuce industry, the cooler workers like Ken worked piece rate.  He knew hard work and made good money.

He was hired by PG&E on April 6, 1972 and joined Local 1245 as soon as he could.  Mark Cook was the local business representative.  Almost immediately, Ken became an active shop steward.  He began a lifetime of knowing and researching grievance precedents.  He also became master of the era’s standards for unit meetings – brawls were common and accepted. When Ken saw members folding up their chairs before the meeting was over, he would silently head for the door.  He told me, “A good run beats a bad fight.”

After Jack McNally was elected Business Manager in 1980, Ken was one of Jack’s first hires – on January 12, 1981.  He worked as a Business Representative for a few years, and then was promoted to Assistant Business Manager as one of the Local’s fact finders in the PG&E grievance procedure.

Ken worked in a time when computer literacy was neither assumed nor innate in the job.  He was an old- school grievance handler, relying on meticulously organized binders filled with precedent organized by contract section rather than a computer database.

Ken was a unionist.  He taught his children to never cross a picket line, to never drink Coors Beer and to never shop at the Star Market in Salinas.  They remember him studying grievances in his chair.  His son Greg remembers – “Corporate lawyers were no match for Kenny Ball!”  Mike Haentjens remembers that Ken’s kids knew that they could never lie to their dad.  He told them “I catch liars for a living” and that he had a strong talent for detecting BS.

As a Fact Finder, Ken was on the road more than half the time.  When he went to Fact Finding meetings, he was prepared to a T.  He had high standards for the reps.  As we started a vigorous internal training program for business reps and shop stewards, Ken’s gifts as a teacher and public speaker same to the front.  He was as good an educator as we had.  If you went through training with him, you know what I mean when I say that he was a good teacher.

He vigorously represented the Union, and civility towards and respect for company representatives had to be earned, but his sense of humor was free.  If I were a PG&E employee, I could wish for no better representation than what Ken gave.

He was a jovial and joyful presence in the office on days he came in.  In the weeks before Christmas, he brought home-made tamales and fudge to the office.  Both were as good as it gets.

The Union grievance-handling processes changed more than once, and Ken accepted the changes and adjusted himself to the new protocols – to the extent that they did not run counter to his principles and the way he was used to doing things.

Ken was a fierce defender of Jack McNally.  At the 1983 internal Local 1245 vote count, when Jack was announced as the winner, Sam Tamimi made an unearthly camel call, and Ken Ball did a high-five that dislocated his shoulder and required surgery to repair.

Staff meetings were old-school when Ken got hired.  He sat in a corner with a floating chorus of Ed Fortier, Dave Reese, Mike Haentjens, Frank Hutchins, and others.  They were clever men.  I laugh when I think of their humor.

When I was preparing for a PG&E arbitration, Ken Ball was my first stop.  He knew the contract, the precedent and the case before us very well.  More importantly, he knew what I would most want to know: the weaknesses in our case.   He read and understood me.  What a luxury!  What a gift!

Mike Haentjens, a retired Business Representative, was close to Ball. “As a Fact Finder, Kenny was tenacious,” Haentjens said.  “Sometimes surly, sometimes rude to HR Reps.  He would argue a case to the bitter end trying to come out on top. Even if he knew it was a losing case he was like a dog on a bone.

“Kenny liked to gamble. When the office moved to Vacaville we would usually make a trip to Cache Creek with Mazzanti. He was a funny guy he would joke about grievances about the staff about politics, but it wasn’t all fun and games.   He was dead serious about representing the members the best he could, through the grievance procedure.”

Ed Dwyer was a Business Representative who worked below and then above Ball, whom he refers to as “The Bear.”

Dwyer wrote: “I met Kenny when I became a Shop Steward.  When I became a Business Rep working out of Bakersfield, he was the Fact Finder, my Senior Rep. Then I got an education. We met once a month to try and settle grievances that couldn’t be resolved at the local level, he was quick, smart and could put the Company in their place. We had many an argument amongst ourselves on how to approach the Company to try to settle a particular grievance. You better know the contract and do your research before you brought the case to Kenny. And you better know the Fact Finding case decision 3588, one I will never forget and have repeated it verbatim on many occasions. In 2007, I was promoted to the Review Committee for the Union, then I was taking the grievances from Kenny that moved up from Fact Finding. The arguments seemed to get more heated but, we were always good friends and Union brothers through and through. He was also a trainer of new stewards at the Union Hall.  If there was ever a more honest man and true Union leader I haven’t met him.”

Management representatives who worked with Ball shared their impressions.

Laura Sellheim was a long-time PG&E manager.  She wrote: “It’s rare to work with someone who will passionately argue on behalf of his members one minute (while lacing the discussion with an impressive array of expletives) and truly be your friend the next.  But that was Ken.  He had a big personality, and he would fill the room with it.  We argued many Fact Finding cases during our numerous commutes (he would always drive) to Walnut Creek and back to the South Bay.  As a balance to these often intense debates, he would speak of his sons and daughters whom he loved dearly.  The most important person in his life was, of course, Cindy.  She really should have been on the IBEW’s payroll given all the support she provided to Ken, making our lives so much easier.  Ken was fair — which can be hard to do when involved in intense debates — and always kept his sense of humor.  He was a great friend and will be missed by all.”

Joe DiMartini was in management at Diablo Canyon.  He wrote that Ken was a strong advocate for employees and employee rights: “He was a forceful presence in Fact Finding Meetings, he still kept a good sense of humor.  He didn’t take the back and forth debating personally and did not expect you to take it personally.  When he’d have enough in a meeting he would close his files, get up and sometimes jokingly proclaim, “I’m going to saturate this place with my absence,” and then walk out.  That always made me smile.

“One of my fondest memories of Ken in Fact Finding is when he came down to San Luis Obispo a day early to go out with Mike Haentjens and Dave Reece (then retired).  Ken called the next morning and said they had stayed out all night and he wanted to cancel the Fact Finding meeting.  I told him no way, that we were all there and we would just wait for them.  They showed up several hours later, wearing sunglasses and much the worse for wear.  Needless to say none of them were in a condition for work, except Ken Ball.  Perhaps worse for the wear, he was still brilliant in Fact Finding.”

I miss Ken.  I am proud to have known him and to have seen the many ways in which he made Local 1245 better.

A celebration of life for Brother Ball is planned outdoors later this spring. Read his full obituary here