Ten-year IBEW 1245 member Melissa Echeverria has joined the union staff as an organizer. She previously worked for PG&E at the Fresno contact center, and has been assisting 1245 with workforce development projects in a temporary capacity since February 2022.

“”When my career began with PG&E, I knew I wanted to be an advocate for my union brothers and sisters and fight for fairness and equality. When IBEW gave their on-boarding presentation during orientation, I was sold; I caught the union bug,” she said. 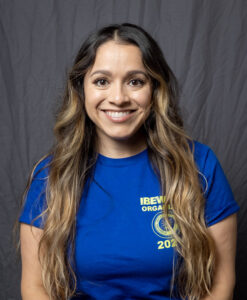 Sister Echeverria has served the union as a unit recorder, shop steward and organizing steward. She has represented 1245 as a delegate to numerous conferences and conventions, as well as at her local Central Labor Council. Echeverria brings ample experience to 1245’s organizing department, having served as a lead on more than half a dozen organizing, legislative and political campaigns.

“I’ve fought alongside my siblings to keep our members’ jobs on the steps of Sacramento, have walked precincts and knocked on doors to get out the vote, and have lobbied constituents in D.C.,” she said. “When I was asked to fill various temp assignments on staff with 1245, I was humbled with every single opportunity. I want to extend my deepest gratitude of thanks to Business Manager Bob Dean and the organizing staff. It is an honor and privilege of my life to be on staff and serve the members of IBEW 1245.”

“My favorite thing about being an IBEW 1245 member is the brother and sisterhood, my union family,” she added. “Collectively, our union is a beautiful melting pot of the values, knowledge, and strength of our IBEW 1245 members which translates into power. That power has given all of us the path to a better life and a better future because of our solidarity.”

Echeverria lives in Sanger with her husband Victor and their rescue dog, Murphy. She loves coffee, traveling, touring breweries/wineries, playing chess, practicing yoga and Star Wars. In summer of 2022, she earned her Associates degree in labor studies, completely tuition-free because of her IBEW affiliation.