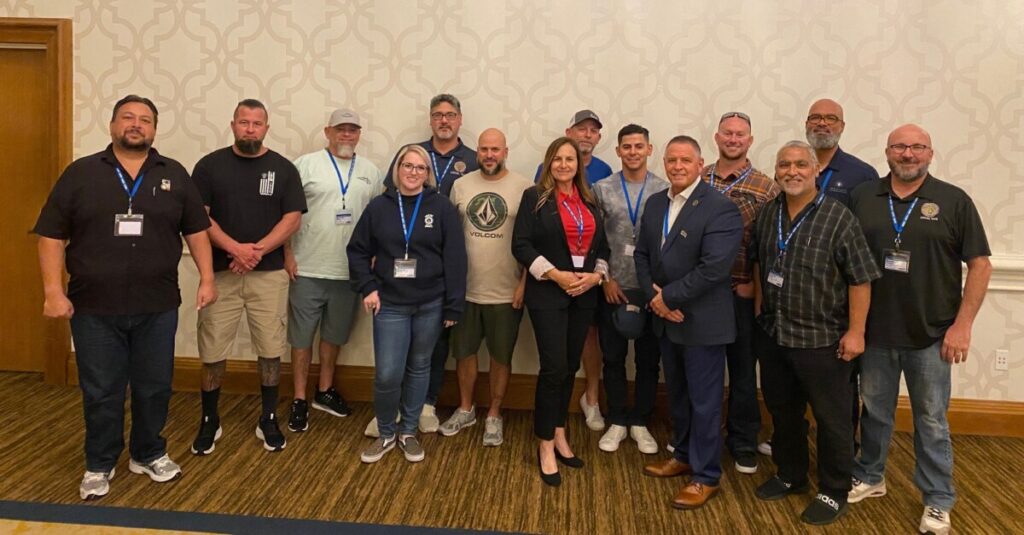 This is the second gas utility conference of its kind that I have had the privilege of attending, and they feel very new each time. There’s a different atmosphere among union members all attending for the common good (compared to a meeting sponsored by the company you are employed by). In this case, the future of gas in the industry was the primary concern — but not the only concern.

Inclusiveness in the industry, particularly among LGBTQ+ workers, was addressed, and diversity was tethered to this concern. The big message was that everyone, no matter where they come from, should have the same opportunities with the union and the companies we support. Local 1245, I feel, has done a good job in these matters, and I’m sure we will continue to do so. But the lengthy discussion among the other unions indicated that there is still work to do, and we have good people at work keeping this moving in the right direction.

In our distribution portion of the conference, the lively and involved discussions centered around leak survey, work performed on older tees. Some companies are remarkably 8+ years behind others in technology in the same field of work. Some locals do not have inserting at all, while it is used very often in the 1245 world.

I would be remiss not to mention that gas in the industry is absolutely not going away anytime soon, like many have said. Additionally, the union is still very strong, very vocal, very educated, and very motivated to continue navigating our industry and the companies we support for everyone’s common good.

I was honored to be asked to help with presentations of the “Gas Transmission- Storage & Production” workshop during the 2022 Inter-Union Gas Conference, held September 19-22, in New Orleans, LA. Brother Wilbur Engelhardt from the United Steelworkers and I facilitated the workshops.  We had a great turnout over the two days, with conversations about the use of drones for leak survey training, line inspection for corrosion and the benefits of using them to collect information in unsafe atmospheres. 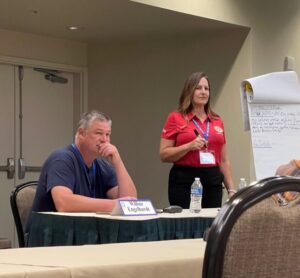 Next, we discussed numerous topics, including gas clearances, which were centered around pigging, hydrostatic testing and training, safety standards and their procedures in place (or the lack thereof). There was a lot of information regarding Personal Gas Monitors and how the device is trending to be a type of management GPS tracker tool for the lines of business.  We are making our membership aware of the initiative and how it can be used, and to communicate the company’s direction; to better protect us from unforeseen and unnecessary discipline.

There were also some discussions about FR clothing, laundry services and boot allowances, as well as portable CNG /LNG trailers to tankers, and their utilization to keep residential and commercial customers in service during clearances. Other topics included cross compression and the capturing and flaring of natural gas to avoid venting and blowing down to atmosphere.

One topic of note was about Gas controllers in-house vs. contracted out, which generated conversation around filling vacancies, demand of the position, negotiated classifications, and not having enough bargaining members to cover the shifts and workload.. We discussed OQs and how hiring retired union members (who performed the work) strengthens the department and retains and promotes knowledge transfer. Another important topic regarded contractors getting more and more of our work.  Let’s ask ourselves, “If our charging of the projects/cost rundown is not comparative to 3rd party contractors, how can we compete?”  Unfortunately, it appears that more of our work flows to the contractor side and our crews continue to reduce in number, as we have less work to perform.

In summary, we, as members who perform the work and maintain it, will need to be involved and engaged to protect our work. Be an active part of the vote, be informed on elections and any company-union proposals.

My trip started with me missing my original flight, due to an unusually long TSA line in San Francisco airport. After having a layover in Houston and my hotel reservations in New Orleans canceled. I worked through these issues and only missed two hours of the first day meetings.

The first day of the conference focused on how the IBEW is striving for equality and inclusion in its membership, growing constituent groups such as NextGen/RENEW, EWMC and Women’s and Veterans’ groups. The general session was similarly focused on diversity in the workforce, and also touched on the role that hydrogen can play in the natural gas industry.

In the Service workshop, it was interesting to learn that other gas service companies replace parts on all different types of appliances (not just gas) including refrigerators and other electric appliances. They even sell and rent appliances. One member from another union shared that, during a contract dispute, the company locked out the union members, and the income from the rentals helped pay for replacement contractors until the dispute was resolved. It was also interesting to learn what other companies are doing about identifying and communicating out to other employees about hazards in the field.

The General session was about politics, and presenter Austin Hastings analyzed how the gas industry’s future will look, with gas still around and the use of new technology to clean up the emissions. The gas industry is actually expanding and replacing diesel engines in the train and cruiseline industries. I think his speech was the most engaging of all.

Even though my trip didn’t start out in the best way, I still had a great time and learned a lot about how other union members and their companies do similar jobs we do. I think the information I came away with out weighed the flight and hotel issues. I hope I can attend another one of these conferences.

The 2022 Inter-Union Gas Conference hosted by IBEW in New Orleans, Louisiana, was unforgettable. I’m honored to have had the opportunity to join others who work in the field at this conference. I sat with other gas clerical employees, primarily contact center representatives, and we discussed the impacts of COVID-19 in the workplace and how many in the group still work from home. I watched IBEW 1245 sister Nicole Brooks present on distribution operations; she discussed how other utility system operations are managed and the training programs offered.

IBEW 1245 Assistant Business Manager Mike Adayan and Business Rep Adam Weber facilitated a large group of union brothers and sisters. They both engaged in conversations around operational procedures, problem-solving situations, and shared what they are doing to ensure a safe workplace. In the afternoon, the conference would reconvene while we listened to guest speakers. The message from these speakers is clear: natural gas is not going away.

This year was my fifth time attending the conference, and like always, it didn’t disappoint.

The biggest takeaway from this year’s gathering was inclusiveness. Suppose we were to put our personal beliefs and political views aside. In that case, we, as union workers, could focus on ourselves as a group of workers, trying to accomplish our goals together. Race and religion have always been the two major categories of discrimination. In today’s world, gender pronouns are here and may be difficult to accept. But, the fact is, we need to. A union member is a union member, and together, we can only become stronger.

Another interesting topic was the history of our last and current presidents’ roles of union support. Again, I put my political beliefs in my pocket and listened. Without placing support one way or the other, I will simply say the current administration has significantly supported union work and workers more than the last.

I was most intrigued the last day of the conference by the final speaker, PG&E’s Austin Hastings. The topic of eliminating natural gas was brought up several times and how twenty-two states have already started to ban it. California seems to be the leader of the pack in that category. Hastings believes, without a doubt, natural gas isn’t going anywhere and believes his grandchildren will retire from PG&E working for the gas side of the house. His insight into hydrogen injection to reduce greenhouse gas emissions greatly interested me. It made me think — hydrogen is a gas, and qualifies under the Pacific Gas and Electric namesake — how exciting to participate in the infancy of hydrogen. Hastings also mentioned how PG&E is pursuing other uses for natural gas, such as fuel for trains and ships, as they currently use diesel which emit high amounts of greenhouse gases. Thinking outside the box will help our industry move forward.

There were several breakout groups, but I stayed with the distribution group. Common topics were operator qualifications, in-vehicle cameras, and overtime call-outs, as they are ever year. As an IBEW 1245 member, I typically walk out knowing how well our contracts have been negotiated and don’t feel the same pains that others in the room do. As a result, we are the measuring stick that other unions and companies compare.

Compared to any other conference or workshop I’ve attended, the biggest takeaway the Inter-Union Conference offers is the environment created. The workshops for attendees allowed us to open up to discuss good and bad work practices without judgment from other participants. Don’t get me wrong, it usually takes the leaders of the workshop to get the conversation started. But, once started, there’s always important information about work practices from other utilities, good and bad, that can be taken back and presented to our members at home.

Now, the best experience I’ve ever taken away from any of the Inter-Union Gas Conferences is the networking and bonds that are created after work hours…this also gives an opportunity for 1245 members to catch up. The Inter-Union Conference is the only time that some of us get to see each other face-to-face. Thank you all again for the opportunity to attend the conference this year. I appreciate the experience, knowledge, and continued relationships I took away from it.

As a member for going on seven years, I would like to thank IBEW 1245 for inviting me to my first Inter-Union Gas Conference in New Orleans. I was truly excited and a little nervous to be a part of such a big event. I really didn’t know what to expect. When the conference was over, I returned home and was able to sit back and reflect on the whole experience.

I went to the gas operations workshop for two days and liked that there were a lot of equipment operators like myself from different places. I got to share many stories and info on how NVEnergy works and how different or similar they are with other states. I met a guy named Dan Oleary from Philadelphia who is from the same town my whole family’s from; he even knew some of them. Dan and I will get together next June, as I will be in Philadelphia for a wedding. He is going to give me a tour of their facility in Philly and how they run things there, so I’m looking forward to that.

All the union reps made me feel very comfortable with any questions, comments or concerns that I had. I enjoyed seeing the latest and greatest in safety and training in the vendor’s section. I had the opportunity to run the equipment operator’s simulator, which was awesome and very realistic. It blew my mind.