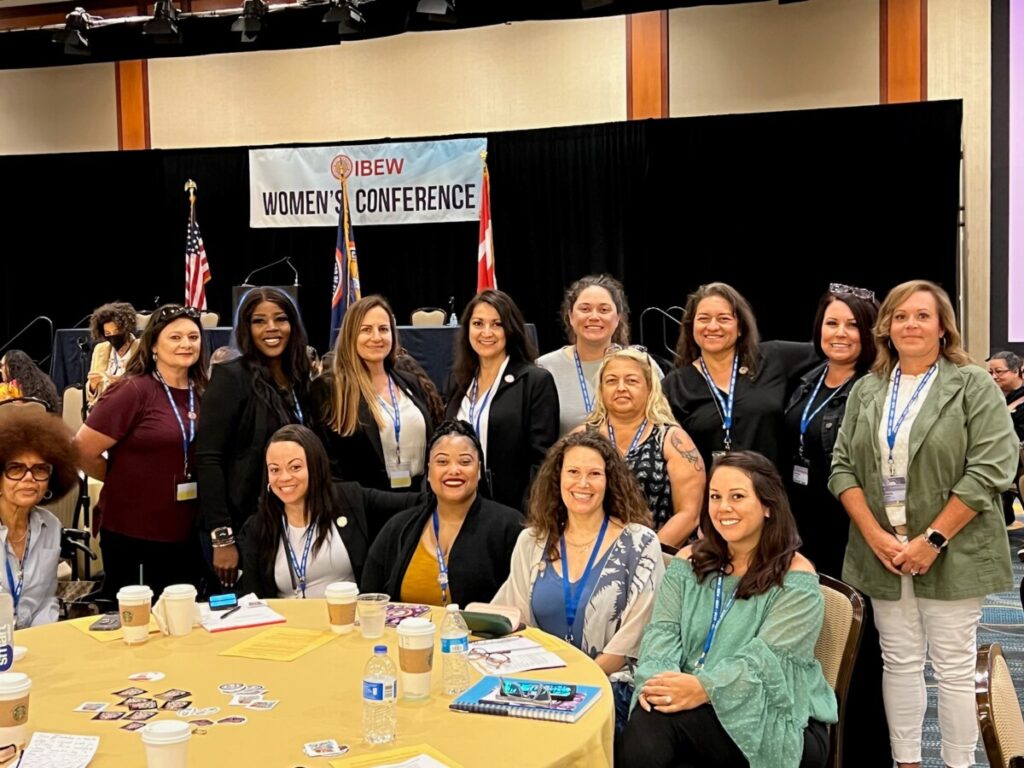 IBEW’s 25th International Women’s Conference opened with a powerful start to a fired up delegation of IBEW women from all walks of life.

The Women’s conference had a dynamic lineup of inspirational speakers, including US Department of Energy Secretary Jennifer Granholm, US Department of Commerce Secretary Gina Raimondo,  IBEW Senior Director of Government Affairs Danielle Eckert, Georgia Secretary of State Candidate Bee Nguyen, Georgia Gubernatorial Candidate Stacey Abrams, and many more. My favorite speaker was Stacy Abrams, her way of motivating and captivating a large group was inspirational.

The Women’s conference also hosted a variety of workshops. My favorite workshop focused on Equality, Inclusion and Belonging. In a culture where one in four women leave their union because they feel that they are not being heard, it is important that we implement these programs.

The conference ended on a positive note, stressing the importance to speaking up and uplifting all women of the IBEW.  I want to make sure when I am climbing up the ladder of success, I am bringing my fellow sisters along.

Thank You to IBEW 1245 for sending me as a delegate to the 25th IBEW International Women’s Conference in Washington D.C. Each day, we were provided the opportunity to attend activities and classes that helped me learn, among other things, how to become the best IBEW activist I can be. The conference also helped me to make connections, build networks and strengthen the IBEW Sisterhood bond.

One of my favorite activities was the lobbying workshop, where they provided us with tips and pointers on lobbying and gave us topics we could later discuss when we went to meet Governmental Staff members by Capitol Hill. I went with my fellow union sisters to visit the offices of two California lawmakers, Congressman John Garamendi and Senator Diane Feinstein. We met with their Chiefs of Staff, discussed important pieces of legislation with them, thanked them for their support of unions, and left them an IBEW Policy Brief on Diversity, Equity and Inclusion to read.

The rest of the conference included other informational and team-building classes, as well as some phenomenal speakers from the IO and local government. Another special highlight was getting the opportunity to tour the International Office, Museum and Media Department. Thank you again for sending me as a delegate to this very special conference, I feel these experiences are truly priceless when it comes to strengthening a member’s Union knowledge and bond.

The Women’s convention in DC had a personal and professional impact on my perspective through insightful seminars and lively discussions on the various aspects of the industry, the union, and our communities.

During our lobbying visit, I was impressed by the down-to-earth discussion with Congressman John Garamendi’s chief of staff, Bradley Bottoms. We discussed the importance of the PRO Act, its impacts on IBEW 1245 union women, and the societal benefits of strengthening labor laws as the best way to address income inequality and grow the middle class. Later that afternoon, we met with another IBEW group who were in discussion with Senator Diane Feinstein’s legislative assistant, Chloe Koseff, regarding the recruitment and retention of women in the trades. Question were raised about how to reintroduce trade careers to adolescents at an early age, in middle and high school. Collectively, we felt there must be more outreach and support to women through career days, job fairs and mentorships.

We also had very engaging seminars. I appreciated the sessions I attended that looked at different perspectives of where we are, and how we become stronger generationally by looking at the future opportunities in our industries, communities, and demographics. A session I  attended on economics engaged us by discussing the benefits and effects of the union directly on families and their communities. They touched on the importance of organizing, legislation, collective bargaining — including the roles women can and will play in growing and strengthening our union.

The conference in its entirety was the most motivational part for me.  I fully appreciated the collaboration of people that it takes to bring a conference like this to fruition.  I was very impressed by the seminars and the people in attendance, to discuss our potential as women and how we empower each other.  I left feeling inspired and motivated, ready to make an impact through creative and innovative ways, including being the change and taking on leadership roles. Overall, it was an insightful and enlightening experience that I will cherish for a very long time.

As IBEW Director of the Civic and Community Engagement Department Tarn Goelling called the Opening Plenary Session of the 25th IBEW Women’s Conference to order, she noted that this Women’s Conference was the largest ever, with more than 600 participants. Gina Cooper, the first woman to ever serve as an IBEW Vice President, welcomed delegates to the 4th District. VP Cooper was appointed to the position in 2020 and elected to the job at the 40th International Convention earlier this year.

IBEW International President Lonnie Stephenson noted that 71% of Americans approve of unions, and said that the current job market gives workers power. He remarked that the IBEW is growing, and that our success depends on organizing more women. Women currently comprise 4% of all members in construction, and that we must step up organizing efforts using the principles of IBEW Strong. He acknowledged that discrimination is still a problem, and reminded delegates that an attack on any member is an attack on all members, challenging every participant to be an organizer and a mentor.

On Sunday, AFL-CIO President Liz Shuler addressed the delegation. She holds the distinction of being the first woman President of the AFL-CIO, the first IBEW member to head the AFL-CIO, and the youngest woman to hold her previous position as AFL-CIO Secretary-Treasurer. President Shuler challenged delegates to get out the vote for candidates that support worker rights, and talked about the importance of relational organizing (face to face) and the many recent union organizing victories, as well as some of the many organizing drives currently in progress.

Standout workshops for me included, “Strategies to Reduce and/or Interrupt Implicit Bias” and “Build Solidarity and Belonging.” Participants were asked to practice micro-affirmations (for example, giving another person your 100%, non-rushed and undivided attention, inviting a person to give you honest feedback. and understanding another person’s life/work/spiritual goals). “IBEW Structure- An Insider’s View” provided an in-depth overview of our union structure, rules and policies at the International and Local Union level.  Other workshops highlighted leadership development, Robert’s Rules of Order, harassment and discrimination, member engagement, and more. Panel discussions included: “Watch Where You Step, There’s Glass Everywhere! Strategies on Shattering the Glass Ceiling,” “Local Union Benefits and Employee Assistance Programs,” and  “Connection to Success — International Mentorship Programs,” “Recruitment Through Community Partners.”

It had been four years since the last IBEW Women’s Conference, and we all needed this experience to renew our direction. 1245 sent several members that had never attended this conference (or any conference) before, they were very impressed and proud that IBEW had a conference just for the women members. They expressed that they were grateful to have experienced leaders, such as Dorothy and me, to help guide them through the conference process.

I was surprised when a member from another local called me an IBEW icon. I always knew that Dorothy Fortier was an icon for all that she has accomplished – but when Dorothy pointed out to me that being the first female President of 1245 now puts me in that category as well, and I was humbled.