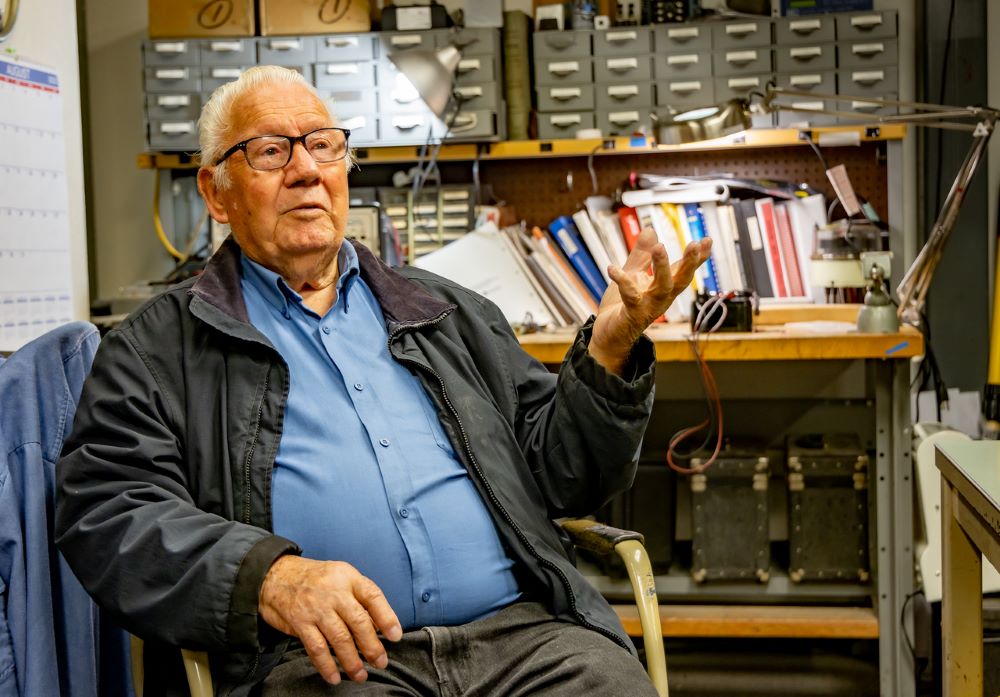 At 93 years young, PG&E Electrical Technician and IBEW 1245 member William “Billy” Atkins Jr is still on the job every day, choosing to continue working instead of riding off into the retirement sunset. The Utility Reporter caught up with Atkins at the PG&E Martin Service Center in Daly City where he works. Atkins, who first joined IBEW 1245 back in 1956, shared a bit about his stint in the Navy, his time at PG&E, his secret to his long career, and his newest hobby – restoring jukeboxes.

Where did you grow up?
I was born and raised in Washington, D.C. and then moved to Alabama and lived on my grandparents’ farm. At eight or nine years old, my grandfather threw me on a tractor and said, “You’re going to plow the field.” I got on the tractor, he started it up, I pushed down the clutch, pushed it and pulled it in gear. That was my initiation.

I joined the service in Alabama, and I never knew I was going to wind up in San Diego for boot camp. That’s what brought me to the west coast. 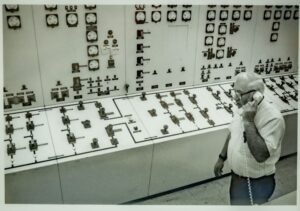 Atkins working at the Mission Substation in 1992

Did you go from the Korean war straight to PG&E?
I did. What happened was a total accident. I joined the service for three years and I got extended for one year. I got married in 1951 and they shipped me over and they sent me back out to sea. I got out of the service on July 20, 1952. Then I started looking for jobs. I went to four or five different places. I went to the phone company, the shipyards, several different places trying to find a job, because I was married, and I had one child, I’m not going to loaf. I got interviewed by PG&E which was on 445-447 Sutter St (there was no 77 Beale St back then). On July 30, 1952, PG&E hired me to go to work for them. So that’s what I did. I started out as an operator.

What got you interested in the electrical trade?
Well, when I got out of the service, I didn’t have a trade really. I mean, there was no trade for a Gunner’s Mate, but I had responsibilities. So, I got out of the service and then I got to work for PG&E and once I became an operator, I saw what maintenance people did. I saw the real electricians at the time, they took care of the whole substations. So I said, “Well, I want to get in the maintenance department.” Once I got in there, I went to Heald’s College for a couple years and qualified to be an electrician.

Then I got to be in the maintenance department and then I waited from 1952 to 1958 to become an apprentice. And then, I became an apprentice electrician. Then I became a technician. And then a few years later on, I decided, well, I want to be at the tech job. So I went to the apprentice tech schools in Emeryville, on the second floor. You learned with a pencil and a piece of paper and a slide rule, you didn’t have calculators [at that time].

Tell me about your job. What do you do most days? 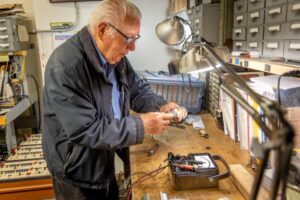 Yesterday I went to Pacifica, tested a couple of relays. Today, I’ll go test something in another substation. And then we get clearances, routine clearances, that you’ll take a cable out and you put one guy on one end and another guy on the other end and you get both ends at the same time. That way you don’t take the cable out twice. So that’s kind of routine work and it’s kind of emergency work. And then you fix GE or Westinghouse relays, any kind of relays.

I’ve got shelves of electromechanical relays. That’s what I started out with, testing with carbon pile and an amp meter and a timer. Today, you hook it up through a box, push a button, and it tests it. Today’s technicians come from a different era, I came along with typewriters, they come along with computers.

You’ve been at PG&E for 70 years, what’s your secret?
It’s just consistency. I like the job. I like challenges. I go towards the work instead of away from it, that’s the best I can say. And then I set up a routine. I’m here from the time I’m supposed to be until the time I go home, and I try to accomplish something and give them their money’s worth every day. 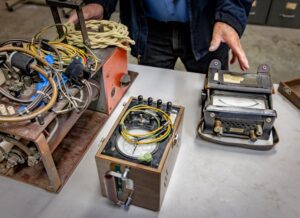 Atkins, with his old testing equipment, which he still uses on occasion.

What’s the most exciting or enjoyable thing you do at your job?
It’s self-satisfaction of getting a job done today, or solving a problem that basically nobody else can solve. I go towards problems if there’s something wrong. I think that’s it in a nutshell right there.

Do you have any outside hobbies?
I have a lot of hobbies. I was a neighborhood mechanic, I worked on automobiles. I restored six Mustangs over a period of time. I switched to doing old-time two-way radios, and now my other hobby is working jukeboxes, which are 45’s. I fix them up and I’ll probably give them to all my kids. I have five children, four girls and one boy. Lots of grandchildren and even some great grandchildren.

What does your family think about you continuing to work?
For the last 10 years I’ve said, “I’m going to retire next year” — but they don’t believe me anymore. My wife, Rose Marie, she likes the idea that I go to work.

And your wife, was she in the Navy?
No, she grew up in San Francisco in the Mission District. She went to Catholic school, and here I am, a renegade from back East and South. It worked out, and I’d do the same thing over again.

Click here to watch the video that PG&E produced in honor of Brother Atkins’ 70th year with the company.