“The California Labor Federation’s 2022 Biennial convention was an inspiring mix of honoring legends that paved the way within the movement, and hope as upcoming generations grabbed the baton to fight on. Local 1245 Organizing Stewards Quentin Hunter, Juan Montoya, and Serena Moss attended as delegates along with members of the union’s staff and Executive Board, and they were able to gain a greater understanding of the process, which energized them to be even more engaged within our local.” — IBEW 1245 Staff Organizer Charlotte Stevens 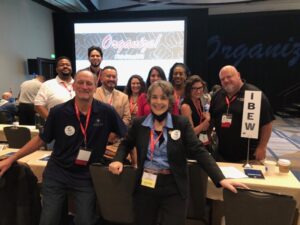 “Attending the Biennial California Labor Federation convention was an experience of a lifetime. To be in a room with so many other unions was an empowering moment … It was awesome to take part in a historic vote to vote in our first woman and first person of color, Lorena Gonzalez Fletcher, as the new Executive Secretary-Treasurer, and we said our best wishes to Art Pulaski as he retired. I learned so much at the convention. Seeing how all the different unions come together like a family at Thanksgiving — with love and admiration for each other, but willing to stand up and fight their own siblings on what they think is right with dignity and respect… it makes me proud to be union strong!” — IBEW 1245 Organizing Steward Quentin Hunter 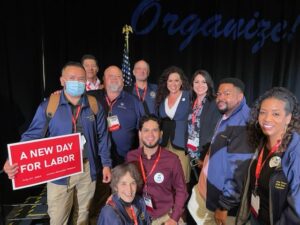 “There were so many great organizers who spoke.  Of course, Dolores Huerta has to be at the top of the list, because of all the important work she’s done over her career, but the Gen Z speakers are on her heels … and they are really challenging the way outreach is done, using social media. We got to hear from Amazon Labor Union leader Chris Smalls, as well as two Starbucks partners who are leading the union organizing effort where they work. Creating unions from scratch is no small feat!” — IBEW 1245 Organizing Steward Serena Moss 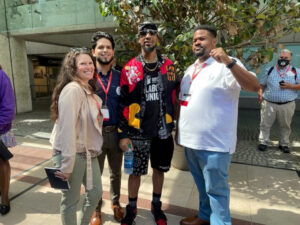 “It was a fantastic experience attending the 2022 California Labor Federation Biennial Convention in San Francisco. This experience allowed me to recognize further the importance of being active within my union. My participation does not just impact my life and my family’s life. It affects the lives of my peers at PG&E and the millions of others within the California workforce who deserve better wages, benefits, and working conditions.” — IBEW 1245 Organizing Steward Juan Montoya