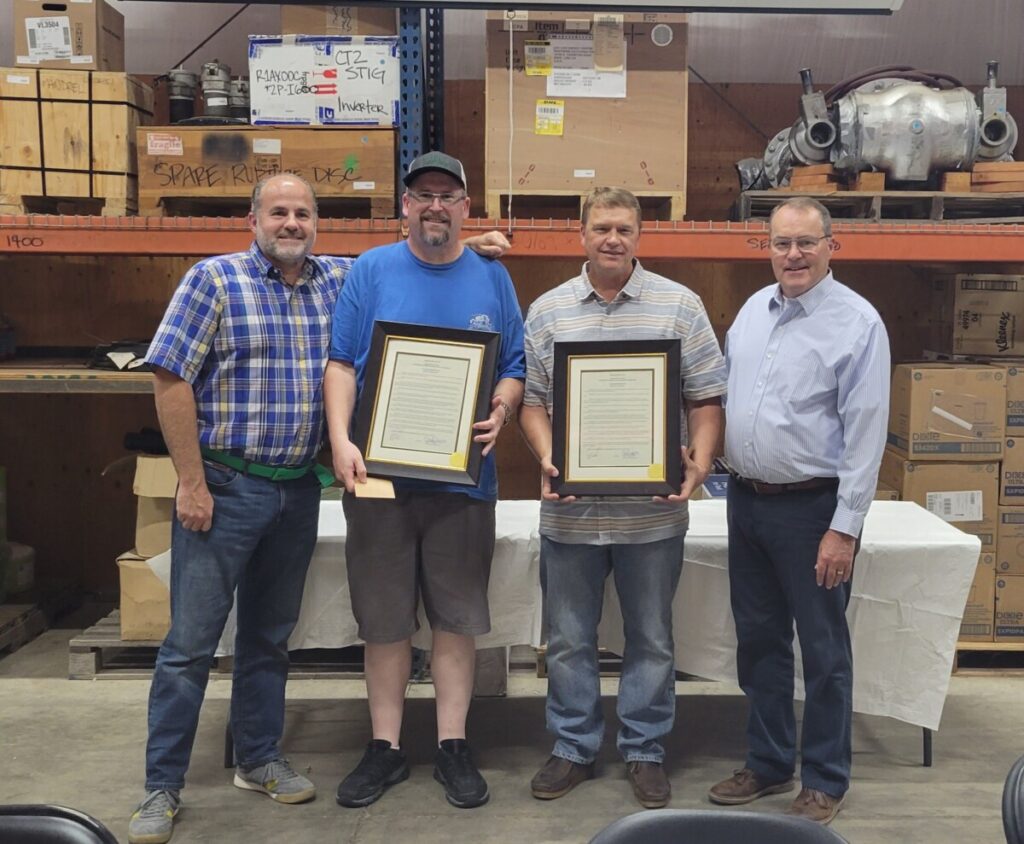 It was the beginning of the workweek at NCPA’s Lodi Energy Center, which began like any other typical Monday in May for the IBEW 1245 members who work at the plant. Combustion Turbine Specialist Scott “Scotty” Aistrup was outside doing some switching; Lead Relief Operator James “Jim” Meyer, a 1245 Shop Steward, was outside by a field gas compressor; and Combustion Turbine Specialist Jerry Pearson was inside the control room. As Aistrup and Meyer made their way back inside the control room with Pearson, little did these three IBEW 1245 members know that their lives would be forever changed that day.

Meyer took a seat next to Pearson inside the control room while Pearson discussed work processes. Aistrup came inside and joined in the conversation. Not more than two minutes had lapsed when Pearson noticed Meyer flop back in his chair, loudly snoring, almost like a growl.

“We both looked at him, we knew it wasn’t right,” said Pearson. “Scotty tried talking to him and he wasn’t responding. Instinctively, Scotty said we need to call 9-1-1. All of a sudden, Jim stopped snoring. I put my hand over his mouth to check for air, I checked his pulse. I told Scotty, ‘He isn’t breathing.’”

Meyer was in sudden cardiac arrest. Quickly, Pearson and Aistrup moved Meyer from the chair to the ground. Pearson started CPR and Aistrup ran to call 9-1-1.

“When Jim was on the ground, he was giving typical cardiac arrest gasps, then he would stop breathing again,” recalled Pearson. “I continued CPR, Scotty was talking to dispatch. I told Scotty, ‘Stop [talking to dispatch], we need the AED, he isn’t breathing.’ Scotty grabbed the AED, I ran over and got scissors, and we cut his shirt, like surgeons.”

By this time, contractors that were on-site had entered the control room. Pearson directed them to look out for the first responders as there was a medical emergency happening, and the contractors immediately ran out.

When Pearson placed the electrode pads on Meyer’s chest and turned on the machine, the “Shock Advised” signal was blinking on the machine.

“I’ll never forget it,” Pearson said as he described the experience of using the AED on his co-worker. “I’ve seen death, but it’s crazy bringing life back. You could see the electricity bouncing back and forth in his body. I could see the ripple across his chest.”

The AED was successful at re-starting Meyers’ heart. Meyer was snoring loudly and stable while Pearson went to grab a damp towel to comfort Meyer in the event he woke up and went into shock. That’s when first responders entered the control room, and the paramedics took Meyer to the hospital.

A few hours later, Meyer called Pearson to ask him what had happened.

“I remember being by the front gate and going back to the control room and then … I woke up,” Meyer recalled. “I could feel myself bouncing around. I could hear someone saying ‘middle aged male, heart attack’ and I realized it was me they were talking about. I then realized the bouncing I felt was being in the back of the ambulance. I woke up after my first surgery and I had machines and wires connected to me and was trying to figure out what had happened. That’s when I called Jerry a few hours later.”

Like many other public sector and utility employees, the IBEW 1245 members at NCPA are required to have safety training twice a year. That training is what allowed them to think quickly in an emergency.

“I’ve done 26 or 27 years of CPR training, not included multiple annuals for new guys or one-offs,” said Pearson. “I got a plaque [at the BBQ recognition luncheon held for Jerry and Scotty by NCPA] and was asked to give a few words, and I said “I’ve done lots of training, I’ve given training, I’ve gotten trained, but you know what, you never know you’re going to use it until that time comes.” We were nothing special, our instincts were survival.”

Meyer is grateful for his IBEW 1245 brothers jumping into action that day.

“It worked out perfectly … If I hadn’t made it back to the control room, they wouldn’t have found me,” said Meyer. “Everyone at the hospital was amazed that it all worked out, that my co-workers jumped into action without hesitation.”

The bond that has formed between Meyer, Pearson, and Aistrup is one of true brotherhood. Meyer is alive today thanks to the quick actions his IBEW 1245 brothers took that day.

“We cliqued that day. I think of him as a brother, I try to protect my family. Because of this situation, we will always have that connection, this bond, for life.” Pearson said. “From the contractors, to Scotty, to the ambulatory care… even if you’re doing the simplest thing to help, you are as much of the help that is needed at moment. In the words of Albert Einstein, ‘Energy cannot be changed or destroyed; it can only be changed from one form to another.’ Jim’s energy was not ready to go.”