In 2018, the Camp Fire leveled the town of Paradise, California and the surrounding area, burning more than 150,000 acres and destroying 95% of the structures. For the past four years, IBEW 1245 crews have been assisting in the rebuilding of these communities.

Recently, the Utility Reporter caught up with some 1245 outside line crews in Paradise who are working on the rebuild effort.

“We’re on Phase Two on Clark Road, installing mainline underground,” explained 11-year IBEW 1245 member Zach Ziemkowski, an underground foreman with C&C Utility who has been on the rebuild since 2019. 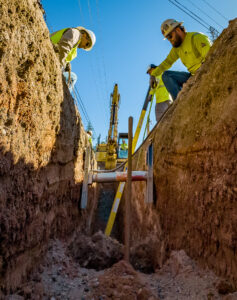 The undergrounding effort is not without its challenges. The fire wreaked havoc not only on the physical infrastructure, but also the environment, which impacts digging. Utilizing state-of-the-art technologies and methods, the IBEW members on the job are committed to completing the job safely and efficiently.

Roger Motichka, a C&C Utility operator foreman and IBEW traveler from northwest Montana who has been working here since 2021, explained his role and how his crew always prioritizes safety over speed.

“On a regular basis, I’m assisting the mainline crew by doing all the tie-ins to the J pads, all the side boxes, building and retaining walls. We all want it to go faster, but we’re functioning at a good pace that is safe for the work environment,” Motichka said. 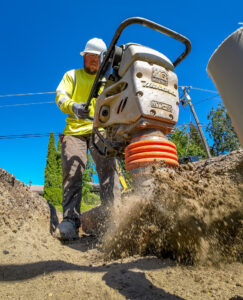 For IBEW member Cody Webber, this job hits close to home – literally. The journeyman lineman was born and raised in nearby Oroville, not far from Paradise. He completed his apprenticeship in the Southwest and traveled around the Midwest for a while before returning to work near his old stomping grounds.

“I know a lot of people that lived up here and that were affected by [the fire]. So it feels good to be working at home again,” Webber reflected after completing a pole set that would be powering Paradise High School.

The utility, gas, construction and other crews recognize the impact of all the work on traffic and residents of the area. 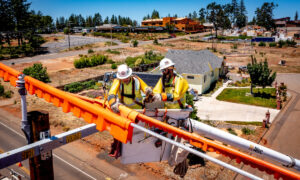 “There are so many different contractors up here working at the same time, not just line contractors, but road construction and gas guys,” Webber explained. “It’s a lot of moving parts at the same time, between when we have a clearance from PG&E or with traffic control, or with trying to energize certain areas.”

Often times, the crews don’t know what they’re going to find on any given day due to the lack of utility marks. 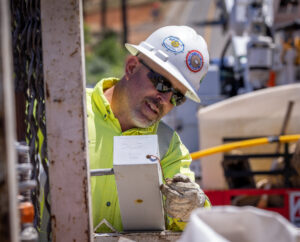 “We do a good job of potholing it, and our vac truck is a big help exposing those underground utilities. But there’s a lot of stuff we’re running into, like unmarked water, or stuff that was put back in the 50s or 60s and there’s no record of it,” Ziemkowski explained.

Now several years into the rebuild, Ziemkowski credits the residents in the area for their patience around the traffic congestion resulting from all the work.

“I think for the majority of people, they’re happy that this is all going underground and it’s going to be safe,” he said. 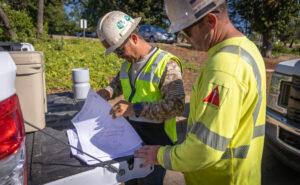 For Webber, being part of the union means the ability to travel around the country for work that interests him, while maintaining his job and benefits.

“I love the flexibility and the support I get out of the union,” he said. “I try to tell a lot of my younger friends that I can go work anywhere in the United States and I get the same support and benefits. I’m not trapped to one area or job.”

“I’ve worked for a lot of big companies where you’re just a number and that’s it. IBEW cares more about their guys,” said Motichka. “Far better than any of the other unions I’ve worked with. This is long-term. This is [working towards a comfortable] retirement, someplace worth sticking around.”

“I’ve been in the union since 2011. The union’s great,” said Ziemkowski. “Everybody’s got a shot to make great pay and have a great job and great benefits for your family. It doesn’t get any better than working union, that’s for sure. Especially 1245—it’s a great, great, great spot.”