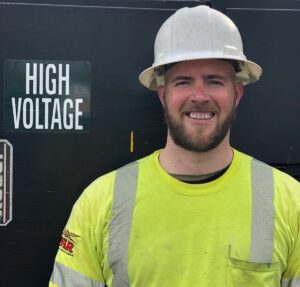 It is with an extremely heavy heart that we announce the sudden passing of IBEW 1245 Advisory Council member Cole Dorsey. Brother Dorsey had recently returned from the IBEW International Convention, where he served as a 1245 delegate, and passed away a few days later. As of this writing, the cause of death is unknown.

“Cole was a wonderful, positive, and engaging young man whose passing will be deeply felt by all,” said IBEW 1245 Business Manager Bob Dean. “It is a crushing loss for our brotherhood.”

Dorsey, who passed away at age 41, was an outside construction journeyman lineman and a 15-year IBEW member. He was running unopposed to retain his seat representing Outside Construction on 1245’s Advisory Council, a position he’s held since 2019. He came to Local 1245 via Local Union 876 out of Michigan, and became a Local 1245 member in July of 2015. He’s been an active and dedicated 1245 member and leader, and his presence will be missed.

More information will be posted as it becomes available. Cole Dorsey (back row, center) with fellow 1245 delegates at the IBEW 2022 International Convention in Chicago