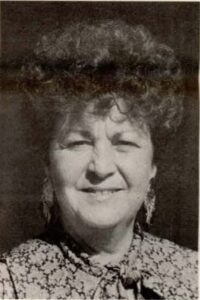 Former IBEW 1245 staffer Enid Bidou has passed away, according to the PG&E Retiree Newsletter.

Sister Bidou was initiated into Local 1245 in 1964. She worked on the clerical side of PG&E all over the Bay Area for 30 years, and served as an Local 1245 shop steward for over 26 years. She also held several unit offices and served on numerous committees, including the joint grievance committee and the bargaining committee. She was also part of the 1979 clerical subcommittee that eventually succeeded in eliminating the Company’s clerical cross-hatch grading system.

Sister Bidou joined the staff of IBEW 1245 in May 1988, and worked for the union for more than seven years. As a Business Rep, her assignments included South Bay Clerical and Physical (PG&E), Pipeline Operations (PLO), and Davey Tree. She represented 1245 as a delegate to numerous labor councils and conference, and she also served of the Local Investigating Committee at PG&E for many years.