At this time last year, the Vegetation Management (VM) Inspectors who monitor the trees that grow around PG&E’s power lines (among other responsibilities) were earning, on average, less than $20 an hour, with little to no benefit options. Worse yet, these non-union inspectors weren’t receiving any of the same sort of standardized safety and skills training that nearly every other worker in the utility industry gets under their union contracts.

In June of last year, IBEW 1245 Business Manager Bob Dean decided it was high time to fix this issue and give these workers the wages, protections, training and union benefits that they deserve. He reached out to the executives at PG&E’s vegetation management team, and together, the union and the company quickly came to an agreement that would turn the tide for all VM Inspectors, including those working for contractors as well as those working directly for the company.

Under this new agreement, the VM Inspectors got a significant and immediate pay raise, anywhere from 50-100% over their previous wage. The agreement also comes with training and enhanced oversight, paid health care options for the contractors, and countless improvements to their working conditions.

VM Inspector Kirra Susalla, who works for a PG&E contractor called ACRT, is one of more than 1,500 workers who came into the union after this new agreement was signed last year. 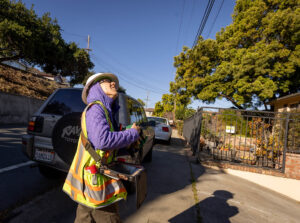 For Jose Figueroa, another ACRT VM Inspector, the best part of his newly acquired union representation is knowing that someone’s in his corner.

“I feel a little bit more grateful thanks to the union. They’re giving me more support in my job,” he said. “I’m glad we are unionized now, because we’re also gaining a lot more benefits, a lot more help when we need it.”

As VM Inspectors, Figueroa, Susalla and their co-workers carry the important responsibility of monitoring the trees that grow around power lines and calculating their growth to determine if and when they need to be trimmed.

“I started in vegetation management in 2019, right after the Camp Fire. It was a pretty gruesome sight, so I wanted to do something to make a difference,” said Figueroa. “That’s when we started the EVM, Enhanced Vegetation Management program, and I got to experience the whole cleanup of the incident, trying to mitigate any hazardous trees, dead or dying trees.” 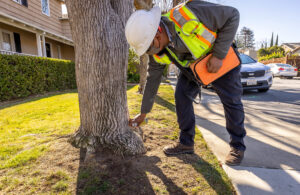 When the Utility Reporter caught up with Figueroa, he was working in a very different type of setting – a residential area in San Mateo. He explained a bit about what his day-to-day job entails.

“Basically, we’re taking a look the rate that the tree is going to grow within a year, and we have to maintain that one-year cycle, to keep compliance year to year,” Figueroa explained. “For instance, a Modesto Ash tree, they typically grow three to seven feet a year, depending on the amount of sunlight and water they get. So I look at the point it was last trimmed, to the point where it grew this year, and that’s how I determine if the tree needs to be trimmed or not, and also the distance between the tree and the line.”

Often times, their work in the field requires them to gain access to private properties, and the reactions they get from customers can vary widely. 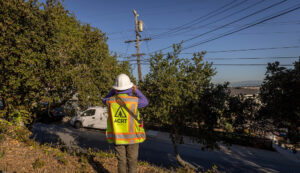 “When I have to ask the owner for permission to enter their property, I reach out to them either via phone call or by a door hanger, or I try to go to their door if I can. If I’m really lucky, I’ll happen to see the people themselves outside taking a stroll. They end up being inquisitive, trying to figure out what I’m doing, and [once I explain my job] then they’re open arms about the idea, said Susalla. “They’re like, ‘You’re here to cut the trees? Please, take them away!’”

“But some customers are very particular about having people like myself going into to their backyards and messing up their landscape or not abiding by what they, as the customer, would want us to do,” she added. 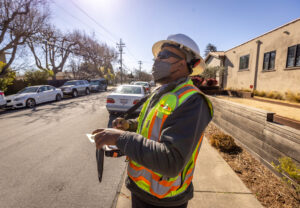 IBEW 1245 VM Inspectors know that they have a vitally important job to do to mitigate the risk of both outages and wildfires. But the job doesn’t just stop at the vegetation. Like all utility workers, VM Inspectors occasionally find themselves in emergency life-or-death situations. Figueroa remembers the time when he was patrolling and saw an elderly man lose consciousness while sitting on a nearby guardrail.

“I dropped everything and rushed towards him, started asking him if he was all right. Didn’t hear any response from him, so I decided to call 9-1-1. I flipped him over because he was facing downwards, and I immediately took off his jacket because he wasn’t responsive,” he recalled. “I was telling 9-1-1 what happened, and I started checking for a heartbeat and checking if he was breathing. He wasn’t doing any of those things. So [9-1-1 dispatch] told me to start doing the CPR, and I started doing CPR on him.”