Seventeen-year IBEW 1245 member Kim Camatti has joined the IBEW 1245 staff as a Business Rep. She will be working with public sector members in the North Bay and North Coast areas, taking over for longtime Senior Business Rep JV Macor, who will be retiring from the union this summer.

Sister Camatti began her career at SMUD in 2002 as an office worker, but within a few years, she moved to the field and became an IBEW member in 2005 as a Material Specialist with Class A. Over her 17 years with the utility, she also became a Certified Forklift Trainer and Safety Facilitator. 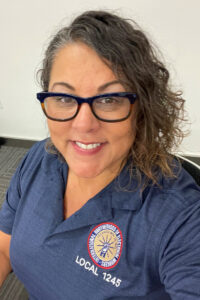 Camatti has been a powerful union advocate for many years, serving as a Shop Steward, Organizing Steward Lead, and contract negotiations team member for the last two contracts at SMUD. After the 2018 U.S. Supreme Court Janus ruling, she spearheaded 1245’s “I’m In” campaign at SMUD, recruiting over 90% of the bargaining unit employees to become volunteer Union dues-paying members. She has also served as a Union New Member Experience (UNME) presenter, guest speaker for the Electrical Workers Minority Caucus (EWMC), IBEW Election Committee member, and Campaign Lead for multiple IBEW-endorsed candidates in the Sacramento area and beyond.

“I’ve found my passion. Employees have the right to be represented by their Union fairly, in good faith and without discrimination. Nothing gives me more pride than serving as an advocate for employees within the IBEW,” Camatti said. “Years of blood, sweat and tears went into every fight 1245 has undertaken over the decades, and what the members have today is evidence of that. I’ve made it my personal mission to educate as many employees as possible; to never forget the benefits we receive because of those men and women who came before us; and to empower current Union members to come together and uphold our negotiated benefits.”

“Union members and staff are the backbone of our union,” she added. “I’m blessed to call each of them my brothers and sisters and to be a part of this family.”

Sister Camatti is married with four children (the youngest is 12, oldest is 30), three grandchildren, and two cats. In her free time, Camatti enjoys camping with friends and family, paddle boarding, live music, theater and sporting events.