Ten-year IBEW 1245 member Charlotte Stevens has joined the IBEW 1245 staff as an organizer. Stevens will be working to grow union power, engagement and membership alongside 1245’s organizing and field staffers. 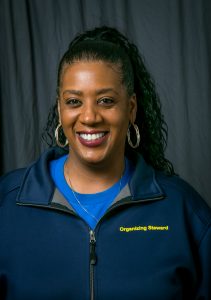 For the past decade, Sister Stevens has worked as a PG&E Service Representative II out of the Sacramento Contact Center. She previously served eight years in the U.S. Air Force with tours in Italy and at the National Security Agency (NSA).

Stevens has demonstrated her union commitment and organizing skills time and again, serving as both a lead shop steward and lead organizing steward for IBEW 1245. On the organizing front, she’s dedicated her time and energy on more than a dozen political, organizing and legislative campaigns in recent years, even travelling as far away as Maryland and Georgia to assist other IBEW locals in their efforts. As a lead shop steward, she’s helped facilitate multiple trainings to equip members with tools and help them understand the union difference. Stevens also represents Local 1245 as a delegate to the Sacramento Labor Council and serves as Electrical Workers Minority Caucus (EWMC) Member-At-Large.

“Through IBEW, I found my passion and my purpose. My favorite thing about being an IBEW 1245 member is the opportunity to share the union difference to others, having a voice at the table, and the leadership tools to effect change,” Steven said. “It an honor and a privilege to serve my union brothers and sisters and working families through organizing. I am humbly grateful for the opportunity to work full time with the leadership staff of IBEW 1245.”

A native of Seaside, CA, Sister Stevens currently lives in Sacramento. She has a bachelors degree in criminal justice and is pursuing an MBA.