When were you first introduced to the concept of unionism?

My great-grandmother was a union member, and so were all of my grand-parents. What I recall the most are the conversations that the women in my family would have about work. My grandmother and my great-grandmother were treated pretty poorly on the job, but they were able to have some degree of justice against the people who treated them poorly – and that was because of the union. In our house, we were always hearing about the union and the fight for workers’ rights – those conversations are some of my earliest memories as a child.

I also remember hearing my dad – who was a PG&E Lineman and IBEW 1245 shop steward – arguing about issues the workers were having with the company, and how important it was for the union members to hold the line and fight back. The power of the union was a constant conversation at my house growing up.

Tell us about your educational and professional background. 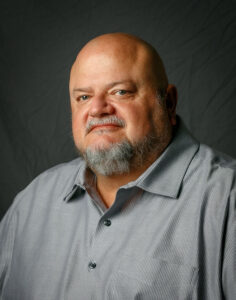 I was born and raised in Richmond, CA. I graduated from Pinole Valley High School, and then I went to College of Marin, and I was also working at the Chevron refinery in Richmond. To be honest, I wasn’t too fond of either. I decided to try something different, so I joined the Navy on a whim. I was driving down 23rd st. and I saw the military recruiter, so I walked in and said, “I want to join the Marine Corps.” He said, “It’ll take six months.” I said, “Okay, I’ll join the Army.” Recruiter said, “That’ll take three months.” So I said, “Okay, I want to go join the Navy.” He said, “We can put you in next week, we’ve just got to do some testing.”

I enlisted one week before Christmas (in retrospect, not the best timing), and I ended up spending 10 years in the Navy working as a Sonar Technician. When I got out of the military, my dad, a PG&E journeyman lineman, told me to give PG&E a try, because he thought I’d like it. I started applying to jobs at PG&E and ended up taking a job as an apprentice transmission system operator in Pittsburg. Eventually I moved and took a bid to Feather River, and I worked in hydro for about 15 years.

How did you end up getting involved with the union?

When I got into Hydro, there were few, if any, shop stewards. The powerhouse was run with the attitude of, “This is how we always do it. This is how we’ve always done it. We don’t take breaks. We take short lunches. We don’t have to follow all these union rules.” But even back then, I knew it wasn’t just “rules” – the contract is a legally binding agreed-upon set of working conditions that everybody has to adhere to. Questions kept coming up with my co-workers — “Why does the contract apply to everybody except us?” And there was no one there to really speak up on these issues, so I reached out to IBEW 1245 staffer Mickey Harrington, and I told him, “Hey, I want to be a shop steward,” and I started advocating for us to follow the contract.

My father was good friends with another IBEW 1245 staffer, Sam Tamimi, and I had known Sam all my life. Sam invited me to serve on some union committees, and that was how I first got to know [then-Business Manager] Tom Dalzell. I was vocal in my opposition to certain letter agreements – I actually got in a an argument with Tom about it. He turned to me and said, “You think you could do better?” And that’s when he ultimately offered me a job, which is how I found myself working for 1245 as a Business Rep down in Bakersfield.

Former IBEW 1245 Staffer Joe Osterlund was hired around the same time. It wasn’t long before Tom tasked the two of us with leading much of the 2012 physical contract negotiations with PG&E. That was my first experience taking on a real leadership role at 1245, and the rest is history.

What drives you as a union leader to continue to push forward on behalf of the working class?

How has your military experience served you during your career at PG&E and IBEW?

Being a Sonar technician in the Navy, and then becoming a system operator at PG&E, it was a very easy transition, skillset-wise. And now, as a union leader, I draw on a different aspect of my military experience. In the Navy, I had a lot of people working for me at a very young age. It was a very diverse, spirited group of people from all over the United States thrown together for a common cause — similar to what we have here at IBEW 1245. We represent the people from every walk of life, every race, color, creed, sexual orientation, and in an era where differences seem to equate to division, I strive to keep the focus on our brotherhood and sisterhood, and what’s good for all of us.  Our strength comes out of that unity.

What’s been your proudest moment with 1245?

I take pride in every single unjust termination that I found back against – getting those fired people back to work is a great point of pride for me. And now, looking at everything we’ve been through over the past 18 months, I’m proud to say that our members have come out of it better than anyone could have anticipated. Not that our members haven’t been impacted – of course they have, just as our whole society has. But their working conditions did not deteriorate during that time, and their pay did not suffer, and their benefits did not suffer, all of which we were really worried about when this started. So now we keep fighting until it’s over and we can move on the next fight.

What do you see as 1245’s biggest challenge right now and in the near future?

It breaks down to two different areas. Internally, we need to work hard to maintain our brotherhood, our sisterhood, our unity. In this highly divisive world, we need to fight to stick together, so outside forces don’t blow us apart. Externally, our industry — gas, and electric, and generation – is changing at an unprecedented rate. And we’re likely going to see more technological changes in next five years than we’ve seen over the last 80. Whether that’s electric vehicles, hydrogen vehicles, DER intrusion onto the distribution system, or drones, we as a union must be involved in all of it. That’s why, now more than ever, we need to have that seat at that table. If there is a gas molecule or an electron going through it, we need to advocate to make sure that remains IBEW work. We need to make sure everyone knows that we ARE the Green New Deal. No one needs to look anywhere else. There is nothing in this industry we cannot do.

What’s your vision for the union?

In my vision, IBEW 1245 is a place where individuals from all walks of life can join the brotherhood/sisterhood, and have a say in their working lives — and every year, their working lives are better than the year before. If we want to grow, we can’t afford to cut anybody out. This has to be a space where people come together, and even if we’re going to have a fight, at least we are on the same side. We can have calm conversations. We can argue it out. But ultimately, we still respect each other and do the right thing. This is how we can make sure our union remains strong in every possible way, so we can continue to have the power to make meaningful change on behalf of the workers we represent.

On a more personal note, tell us about your family.

I’m married to my beautiful wife, Cindy, and I have two grown kids. My son is a backhoe operator at  PG&E, and my daughter is a lawyer. We also have a couple of dogs.

Who’s someone who has been a hero or inspiration to you?

I’d have to say my father. He always tried to fight to do what was right. He was sort of a renaissance lineman – he wanted us to learn about our history, and other cultures while making sure we were always willing to stand up for ourselves. He gave us exposure to a lot of things. He taught me a lot, and if I had to pick a hero, it would be him.

Do you have any hobbies, passions or special talents?