The utility landscape is changing, and IBEW 1245 is continually growing and adapting so that our members can deliver power safely, efficiently, and competitively, both now and into the future. Our union works hard to stay abreast of the latest trends, understand new technologies, and train our workers in the skills they need, particularly as automation becomes more pervasive across all industries, including ours. 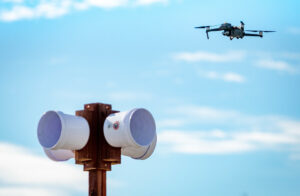 Unmanned aircraft systems (UAS), or drones, are a prime example. In recent years, utilities have increased their use of drones to carry out certain work that has traditionally been done by IBEW members. Drones are used in both routine and emergency situations – to patrol lines, determine the cause of outages, examine equipment, and identify access points in remote locations. They have an advantage over traditional vehicles such as helicopters in that they are able to travel quickly into no-fly zones at a lower cost and reduced environmental impact.

Three years ago, IBEW 1245 launched a pilot program to train a small group of PG&E linemen to perform this drone work, rather than let the work be outsourced to non-union operators. Those who attended that initial program became certified drone pilots, and the training provided them with the skills they need to conduct utility-specific drone operations.

In the fall of 2021, we initiated another round of drone training at our new Woodland JATC training facility with 20 IBEW 1245 members from non-PG&E employers. The training began with a drone pilot license course, and then the participants received the same sort of utility-specific hands-on drone training that the PG&E linemen had gotten in the first pilot program. 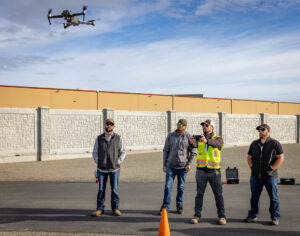 Robert Henley served as the primary trainer for the program. With more than 25 years in the oil and gas industry, Henley is an expert in the field. His company, PrecisionHawk, is a well-known industry leader, covering over 1.2 million distribution pools, and more than 50,000 transmission line inspections.

“We built this program with the IBEW to take a lineman whose primary job isn’t to utilize a drone, but fix and repair the electric grid, and give them a new tool to their toolbox,” Henley explained. “We give them the skills that they will need to safely navigate their lined environment.”

“They don’t have to get out their climbing gear, they don’t have to climb the structure … It’s increased the safety profile for the linemen,” Henley continued. “Within just a few minutes, we can pop a drone up in the air, get high-definition imagery of that problem, and then transport that information back into the workflow system so project management to plan the work, the engineers to see what’s going on, and then the lineman can quickly diagnose the problem.”

Journeyman Lineman Jon McCue was one of the IBEW 1245 members who participated in the training. For the past 17 years, McCue has worked out of the North Lake yard at what is now Liberty Utilities. This training was the first time he had ever flown a drone. 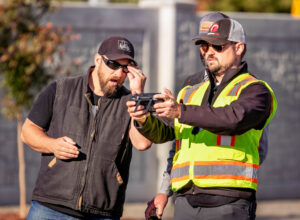 “My first impression is it’s harder than it looks, and there’s a lot more to all the rules than people think there is,” McCue said. “But it’s a very useful tool. I can see a lot of applications where this can be very helpful to us.”

“The territory I work in, Tahoe, is very inaccessible,” he added. “I can see being able to take the drone out and get much better patrols on the line by reaching areas that sometimes we don’t have very good foot access to.”

McCue imagined a future in which every truck is equipped with a drone, and every lineman has the opportunity to participate in drone training.

In addition to securing the future of utility work, IBEW 1245 is committed to securing strong workplace protections and the highest safety standards for its members. McCue is a proud member of the union, and also serves on the IBEW 1245 Advisory Council.

“When I was non-union, you just kind of had to take what was offered,” he said. “Trying to negotiate for yourself, you don’t have any leverage and you just take what you get. Being a union member means having that opportunity that comes up every contract, and we can continually improve all the time.”

“The union has improved my family’s life tremendously,” McCue added. “I’m very passionate about it, and try to be involved.”