At 82 years young, Ed Beoshanz is one of many IBEW 1245 dues-paying retirees who has chosen to stay involved with the union during their retirement years.

An active member of his community, Beoshanz lives in Davis, California, on an 80-acre farm that has been in his family and operating for over 100 years. He still remembers the days when the area was sparsely populated and consisted mostly of farmers; back then, neighbors worked together to keep the rural community going. Beoshanz joined the West Plainfield Fire Protection District as a volunteer when he was 18; the decision was an easy one, as the original firehouse used to be located on his family farm. 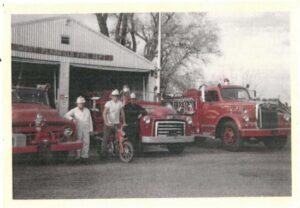 Ed Beoshanz, center, with his father (left) and another volunteer firefighter. This photo was taken in 1968 in front of the new (at the time) fire station located on Beoshanz’ family ranch outside of Davis.

Beoshanz knew it was hard to make a living farming, so, as a young man, he tried his hand at other types of work. He attended college in Sacramento studying aeronautics, and went to work with PG&E during the summers. When he graduated, he decided that being an airplane mechanic, while a good career, wasn’t his calling. He realized that working for PG&E was what he wanted to do.

“I was fortunate to join PG&E and IBEW,” he recalled.

Beoshanz retired in 1995 as Shop Foreman in Oakland, where he worked as an inspector on trucks and also as an instructor. Over his 33-year career, Beoshanz’ job took him all over the service area – from McDonald Island to Diablo Canyon (back before construction of the plant even began!). He recalls the carts that he traveled on from tower to tower inspecting lines (and causing traffic jams of onlookers!), and the pride he felt, being involved with power projects that would bring energy to so many Californians.

Being part of the Fire Protection District is another rich source of pride for Beoshanz. He started as a firefighter, eventually moved up to fire captain, and subsequently held multiple leadership positions, from assistant chief to Commissioner. He served on the West Plainfield Fire Protection District Board of Directors until his retirement in 2021. Recently, the Yolo County Board of Supervisors formally recognized Beoshanz for his lifelong service.

Beoshanz credits his union job at PG&E with supporting his fire protection service duties: “In the middle of the night, I would help out with car wrecks, house fires, and so on. PG&E was great. I was fortunate that the Company would give me extra time for helping in the community.”

Being part of the union has also been a decades-long commitment for Beoshanz. He still attends union meetings down at the hall, and tries to keep abreast of the latest news. He has also joined other retirees to talk to legislators in Sacramento about legislation effecting our members

For Beoshanz, having good benefits was an important reason to be part of the union, but the best part was the brotherhood.

“I was always in the union. It helped create camaraderie, that’s for sure,” he reflected. “I made good, life-long friends. The fellows that I worked with over the years–we still keep in touch.”