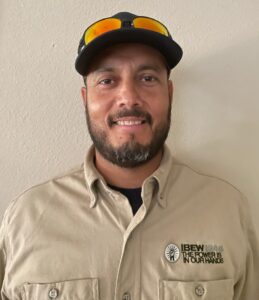 Seventeen-year IBEW 1245 member Ben Contreras has joined the union staff as a Business Rep. He will be working with outside construction members in the central/southern area, taking over for longtime Business Rep Richard Ingle, who will be retiring.

Brother Contreras begin his union career in vegetation management in in the early 2000s. He eventually got into the lineman apprenticeship, and journeyed out in 2015, working for several outside construction contractors over the years. Prior to coming on staff at 1245, Contreras was the general foreman for MGE Underground out of the Fresno yard.

A staunch advocate for the union, Brother Contreras has served as a shop steward, and has sat on both safety and negotiating committees. For the past three years, he’s also served as a lineman instructor at the Cal-Nev JATC.

“I am blessed and forever grateful to be a 1245 member, best decision I ever made back in 2003. And being a lineman is the best thing that has happened to me, career-wise. It is a life-changing career that has given me so much, which is why I’m ready to give back and contribute in everything I can for the 1245 staff,” said Contreras. “I know I have some big shoes to fill, but I’m up to the challenge. I’m going to give it my best to represent our local and our members in the best possible way.”

Brother Contreras lives in Fresno, and is happily married with two teenage children. When he’s not working, Contreras enjoys spending time with his family and playing soccer.