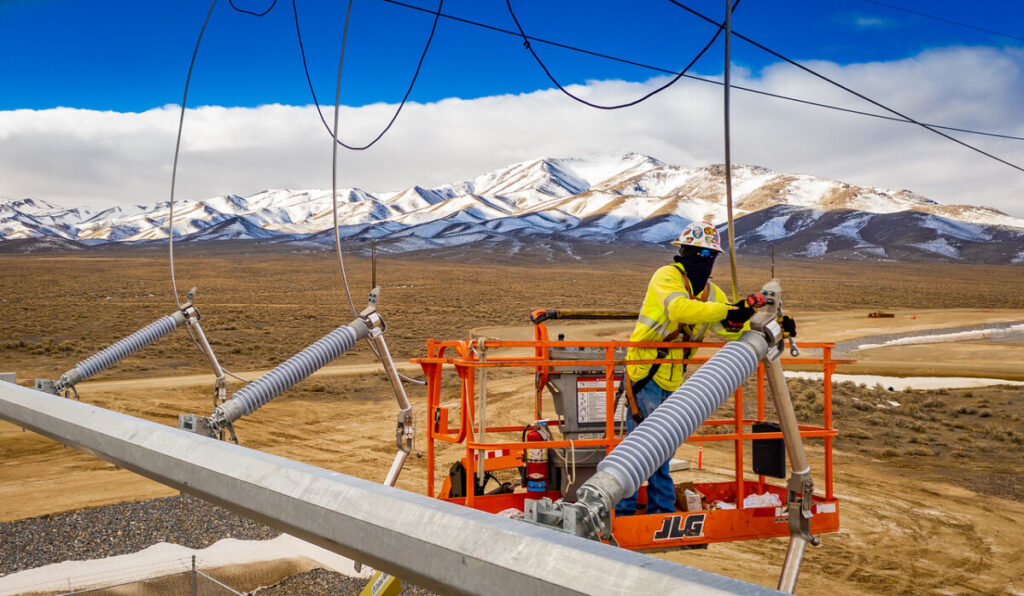 Outside line members working for Dacon Corporation were brought in to do the majority of the construction on the 101-megawatt solar photovoltaic project, which also includes 25 megawatts of battery energy storage. The project is slated to be completed in April, and NV Energy plans to begin operations as soon as this summer.

When the Utility Reporter went to visit Battle Mountain — also known as “the gateway to Nevada’s outback” — in February, the temperature was below freezing, but the crews were hard at work, finishing up the substations and switchyard that will feed the power from the solar project back to the utility.

Local 1245 Groundman Amos Commander found himself in Battle Mountain when the project he previously worked on in California stopped due to the COVID-19 pandemic. According to Commander, inclement weather has been one of the biggest challenges on this job. Despite working previously in Incline Village, where he’d encountered plenty of snow and the occasional bear, the conditions at Battle Mountain have proved to be even more difficult. 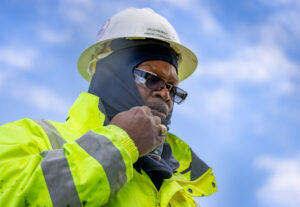 “I knew it was going to snow out here,” explained Commander. “After the snow, we’re dealing with ice, maybe two inches of ice under the snow. We’ve got these muck boots, but it’s slips and trips all over the place.”

Foreman Ricky Bridges out of Local 66 in Houston explained how the weather has held up the project: “We’ve had blizzard wind for a couple of days, and you can’t really fly anything in the air when the winds are blowing so hard, so we can’t get lifts in there.”

“It’s a simple substation to build,” he added. “[The challenge] is just getting the material. We’re so far away, it’s hard to get parts, and you can’t find parts when you go look for them.”

Despite these challenges, IBEW workers know how to get the job done. Commander expressed appreciation for the comradery on the job: “The people I work with are great. I’m the shop steward, and we haven’t had a problem out here yet.”

NV Energy Relay Technician Aaron Luzier explained some of the utility-side considerations of the construction project.

“Any time there’s a generation going online, there’s a termination point that ties to our system,” Luzier explained. “So, we have to make sure that the protection is there for our system, as well as if something happens on the solar side or generation side, that it’s protected.”

“My portion is to do all the relay,” he added. “We put all the relay settings in and test everything. If something was wired wrong before we got here, that’s how we catch it.” 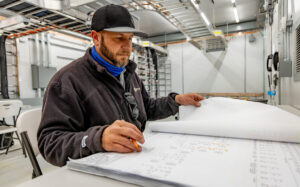 Luzier noted that working with contractors can sometimes be challenging, but he appreciated that the IBEW hands on the Battle Mountain project are committed to a shared set of standards. He clearly appreciates and values having Local 1245 representation on the job.

“The union is great. They keep us safe at work,” said Luzier. “We have a very good work environment. NV Energy is one of the safest [utilities] there is.”

“I love the union,” echoed Commander. “It’s been taking care of my family and me for the last 20 years. It’s just a great bunch of guys. I’ll be union all my life.”