My parents raised their three children on one union income. We lived in a modest home in a nice neighborhood, always had a reliable car, and I never remember ever being hungry or deprived of essentials. My parents knew the value of being employed by a union company, and made it clear to me that’s what I needed to set my sights on.

My first job, while attending college, was as a union represented restaurant worker. My wages and work conditions were much better than many of my friends going to school and working, or even those working full time after graduating from high school. 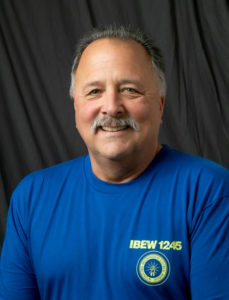 Shortly after my 21st birthday, I was hired by PG&E into a bargaining unit position. The HR representative told me all the advantages of being in the union, but it was not mandatory to join.

I discussed this with my father and he told me there was nothing to think about. He told me, “A union is like a dependable friend, always there if needed, to help make a good life for you and your future family.”

Because of the wages afforded me by a good company and strong union, I was able to buy my first home at age 22. Feeling financially stable at age 25, I married. By 29, we had three children, all covered by the benefits negotiated by my union. The wages and benefit package the union and company had agreed to allowed my wife to be a stay-at-home parent, raising our three children. This was not that common in the 80s and 90s, and neither were the good union jobs that enabled this. Union jobs had become few and far between.

Entering into the 1990’s, the “PG&E Family” was coming to an end. During this transition, the union became a bigger influence to stop some attempts at radical changes in the way the company managed its workforce.

The union became the face of reason, and, in many cases, prevented the company from going down the wrong path. It was around this time that many members were called upon by the union to help shape the future and ensure our safe working conditions, and preserve our wages, and benefits.

94-53 committees, labor agreement negotiations, energy crisis, bankruptcy, transformation, and a deteriorating retiree medical benefit were just some of the issues confronting our Union.

Perhaps the issue with the most potential to negatively impact our former and current brothers and sisters was Nevada Energy’s, (formerly Sierra Pacific Power), attempt to terminate their retiree medical benefits. Our union provided resources, both human and financial, to join with Nevada Energy’s retirees and stop that threat. Had Nevada Energy management been successful, the next stop would have been PG&E.

As it was, the retiree medical benefit had already been diminished greatly at PG&E. Contract negotiations in 1993 had allowed the company to cap the 100% company-paid retiree medical premiums at 2000 premium levels. This had placed a tremendous financial burden on PG&E retirees as years beyond 2001 had passed by. Outcry from existing retirees made the Retiree Medical Benefit a top priority at the future sets of Bargaining.

I firmly believe that, had the retirees of both Nevada Energy and PG&E not been united after retirement, both would have lost their medical benefits.

So why should you continue to be involved in your union after you retired?

Why wouldn’t you just sit back and enjoy all the benefits?

It’s simple… United, we stand and fight for what we have; Divided, we ….well, you know.

Mike Scafani retired from PG&E in 2017 after 40 years of service. He served on numerous committees, mostly on the Gas side, during his lengthy career. He also served as a member of the IBEW 1245 Executive Board from 2013-2014, and as a retiree organizing steward.