We are devastated to announce the passing of fifteen-year IBEW 1245 member Ricardo (Rick) Perez, who tragically lost his battle with COVID pneumonia.

Brother Perez worked at the SMUD warehouse as a tool room repairer, and previously worked in fleet as a mechanic. He was well-liked by his co-workers, who describe him as “caring,” “a sweetheart” and “a great man.” He was known for his cheerful, friendly demeanor and his willingness to go above and beyond to help anyone in need.

“He was the most genuine, whole-hearted, loving human being. He was known and loved by everyone at SMUD,” said co-worker Stephanie Baker, who worked alongside Perez for nine years. “He has always been like a father figure and best friend to me.” 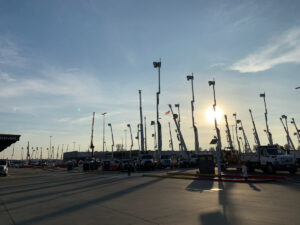 Brother Perez was hospitalized in December with COVID-19 and was on a ventilator in critical condition for several weeks before passing away on Jan. 13. Upon learning of his passing, his colleagues at SMUD raised the booms on all of the line trucks to honor his memory.

Brother Perez is survived by his wife Marie, and four children, Irene, Miranda, Marco, and Ricardo Jr. According to co-workers, his wife never asked for anything except prayers during his illness, but he was the sole provider for the tight-knit family, and they could use our support during this difficult time.

A co-worker has set up a GoFundMe for the Perez family, and friends at work hope to raise enough money to cover the family’s expenses and replace the aging roof on the family’s home (something that Brother Perez had been trying to do for some time). Please give what you can using the link below.