In my lifetime, our country has never been as politically divided as it is today.  What I am writing today is not about politics, it is about people.

With Joe Biden and Kamala Harris the presumptive nominees for Democratic party, we have two politicians who have personal relationships with Local 1245.

I spent the day with Vice President Biden at the PG&E Oakport yard several years ago, when he visited a class of military veterans who were completing a PG&E Power Pathways program.  I sat with him and the veterans for several hours.  They told their stories of service, frustration in the job market, and hopes for careers at PG&E. He listened, asked questions, and showed them respect. We then went outside and he spoke to assembled PG&E employees and the press. In his remarks, he praised Local 1245 and our members several times. 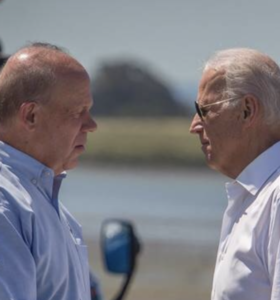 In this photograph from that visit, Vice President Biden was telling me that without the support of the IBEW in Delaware in 1972, he would never have been elected to his first term in the United States Senate. He told me the names of the IBEW Local leaders with whom he had worked – more than 40 years later. 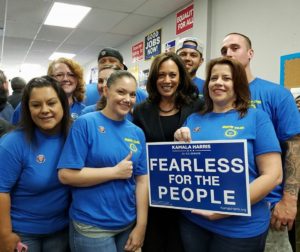 Early in our organizing steward program, she hosted a several-hour meeting with our organizing stewards. She has been a good friend. When criticizing PG&E on wildfire issues, she has always been careful to distinguish between PG&E and its employees, and frequently mentioned the hard work and dedication of our members.

There will be a time and place to talk about the issues and politics of the presidential race. Today, I am just proud of our relationship with Vice President Biden and Senator Harris. Whatever your politics, it is an extraordinary moment for Local 1245.