On July 8, IBEW 1245 member Dave Worstein was in Corcoran, California at work on a high speed rail project underway there, when his day became anything but ordinary. Worstein has 40 years in the trade at PG&E, and he’s currently contracting for Canus. His job involves inspecting underground vaults and conduits so that overhead lines can be moved to make way for the rail project. 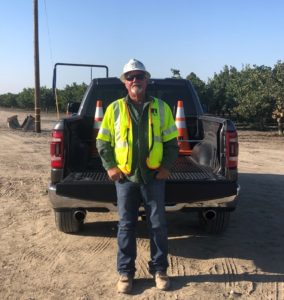 That morning, Worstein was with PG&E Foreman Jacob Hunt, who happened to see him on the job site, and stopped to say hello. As they talked at the intersection of Highway 43 and 144, Worstein observed a lowboy truck carrying a large scissor lift following a pilot car that was headed for the steep railroad tracks right in front of him.

“I’ve seen lowboys get stuck before. I immediately knew the truck was not going to make it over the tracks. If he turns and follows the pilot car, he’s going to get stuck, and we’re going to have to call the rail right away,” Worstein remembered thinking.

In the course of his inspection work, Worstein knew that 15 to 16 trains passed these tracks every day, a few each hour. He knew there would not be a lot of time to remedy the situation, and acting quickly was imperative. 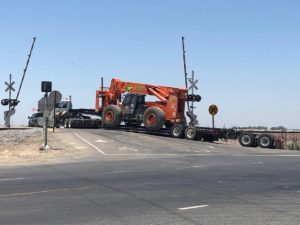 The lowboy truck, stuck on the tracks

“Our training teaches us to respond to situations and not panic,” said Worstein. His phone was in his truck a couple of hundred yards away, and there was not enough time to retrieve it. He directed Hunt to call rail immediately, to alert the dispatcher that a large truck was stuck on the tracks.

The dispatcher responded that a train was within a mile, asking if Worstein and Hunt were able to get the truck off the tracks, which was not possible. Hunt ran across the road to pinpoint the incident for Department of Transportation.

Moments later, the dispatcher informed Worstein that they were able to get the train stopped. It was an Amtrak passenger train with about 80 people on board, which came to a halt only a couple hundred yards away, and would have certainly been derailed by the truck on the tracks. 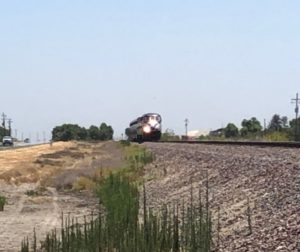 The Amtrak train had about 80 passengers on board

“From the time we made the call, to the time the train stopped, it was four minutes. It seemed like eternity,” said Worstein.

With the train safely stopped, Worstein and Hunt assisted the truck driver, as rail associates arrived on the scene to inspect that the tracks were okay. They commended Worstein for his efforts and how many lives he had saved. Worstein had not registered the gravity of the situation until then.

“In the heat of the moment, you don’t think of it as being a heroic effort,” Worstein explained. “You don’t realize exactly what could have happened. But reflecting afterwards, this could have been catastrophic.”