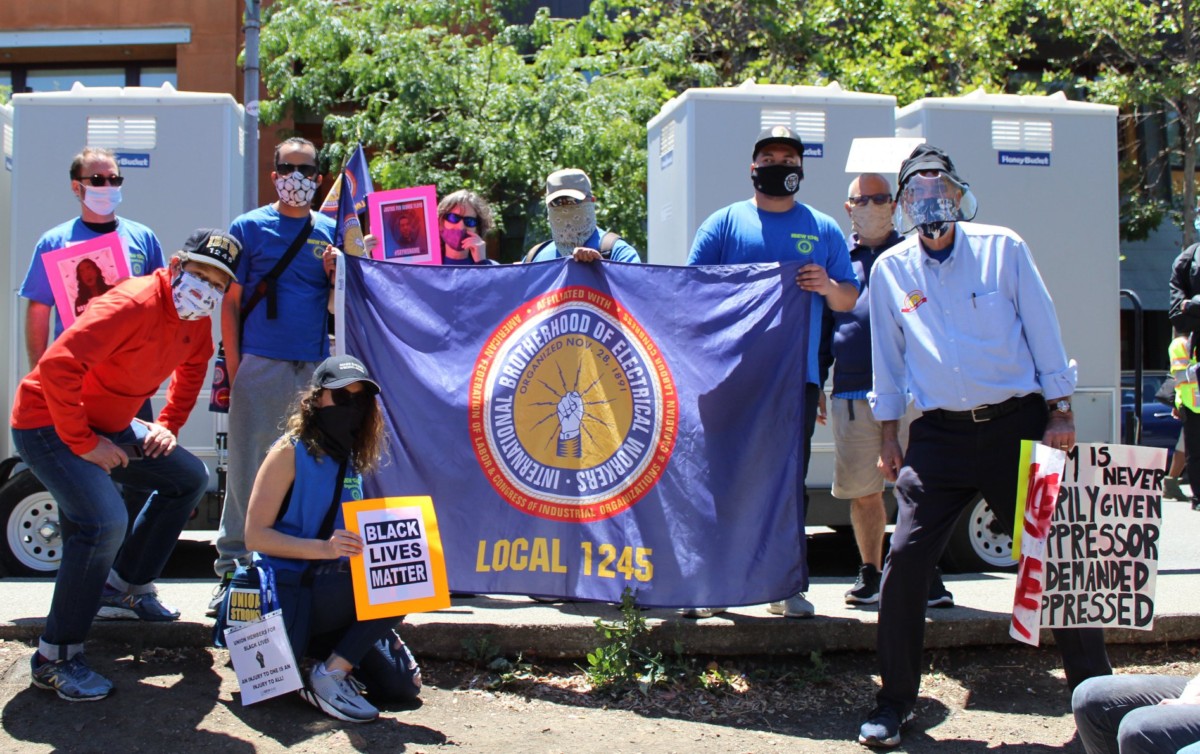 The chant echoed through the streets for miles, as thousands of union members and supporters marched from Oakland and Berkeley on Saturday, June 13th to protest the senseless killings of George Floyd, Breonna Taylor, Ahmaud Arbery and countless others. 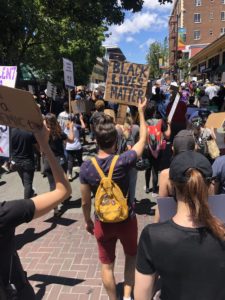 “These killings have been traumatic to Black people. It’s stirred up many personal memories and personal experiences that are very hurtful. Police brutality is one of the more obvious forms of racism, but it’s only one part of a bigger systemic issue,” explained IBEW 1245 Assistant Business Manager Al Fortier. “I participated in this march as a part of a healing process. It felt good to let off steam, get out and see and hear a diverse group of people coming together for racial justice.” 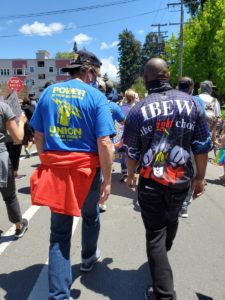 Fortier was one of nearly two dozen IBEW 1245 staffers, members, family and friends who participated in the “Unions For Black Lives” event, which was organized by the Alameda, Contra Costa, San Francisco and San Mateo Labor Councils, with ample support from several different unions. The event began with a rally at the Rockridge BART station, and then the march proceeded down College Ave into Berkeley, where it concluded with another program at UC Berkeley’s Sproul Plaza, a spot made famous during the Free Speech Movement of the 1960s. Along the way, the masked marchers were met with lots of support from neighbors, passers-by, and local businesses, several of which were handing out free water, snacks and hand sanitizer.

“Being there gave me a sense of unity and empowerment, because there’s power in numbers – and there were a lot of people there! It was a great turnout,” said IBEW 1245 Organizing Steward Mona McCarthy, who joined the protest with her 24-year-old daughter, Reina. “I feel that this is an important cause, and, being a part of the union, we’ve got to stand up for what’s right. Now is the time for IBEW to stand up and show up!” 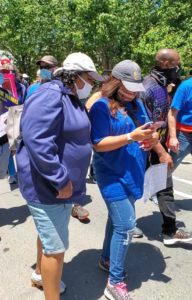 Mona McCarthy, left, and her daughter Reina check out some photos that Reina snapped on her phone during the march

“My daughter’s been to plenty of conferences and union meetings with me, but she’d never been to a protest before,” McCarthy added. “She was really intrigued just by being there. And I let her know that this is history in the making, and by coming out and walking with us in that space and time, that means she’s a part of history now.”

“I decided to participate in the Black Lives Matter protest because I need to show support in every type of way possible! It has been an emotional experience, especially for someone like myself that arrived in this country as an immigrant. It disappoints me to see how our brothers and sisters struggle and are treated differently based on the color of their skin,” said IBEW 1245 Organizing Steward Alvin Dayoan. “I am extremely proud of IBEW 1245 staff and members for taking part in such a wonderful and historic experience with our fellow unions and the Central Labor Councils. I will continue to participate and encourage others to join this important cause.”

“Anyone who wants to participate in these events should do so, and should help organize members to attend,” echoed Fortier. “There is a great need for member education about racial disparity. It’s an ever-present experience in the Black community.” 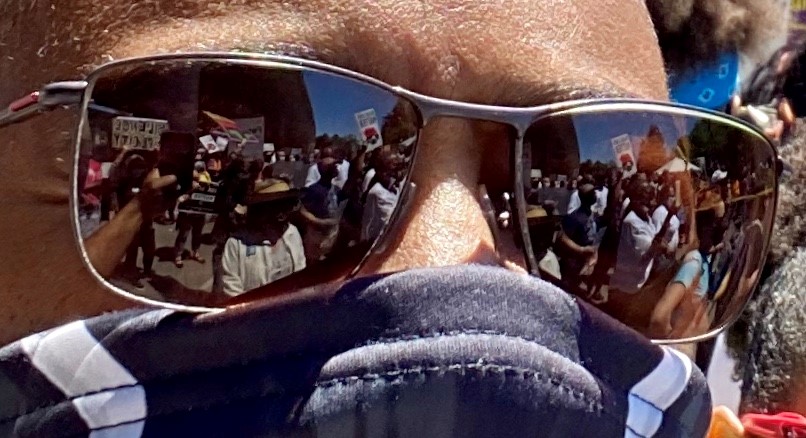