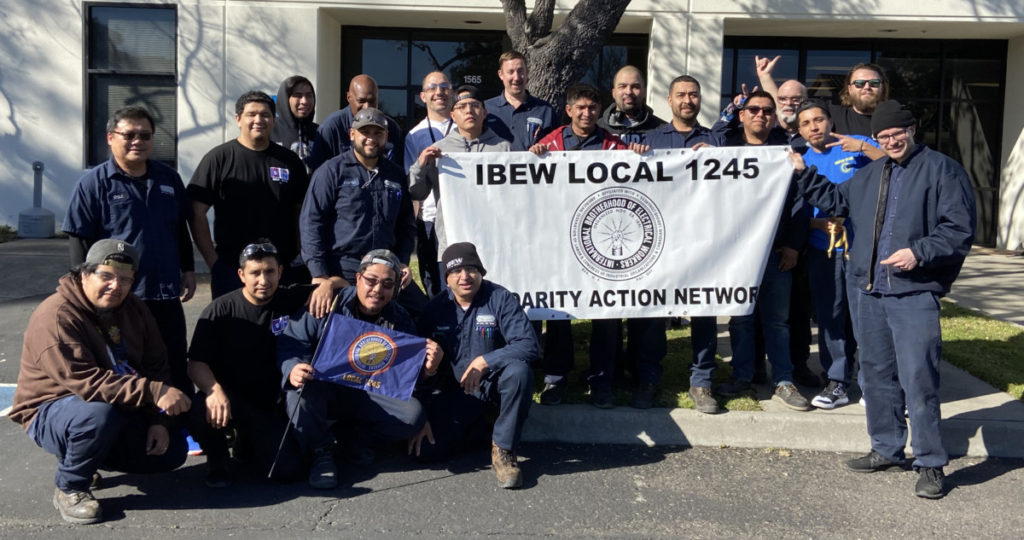 After a long and contentious organizing drive, the welders, machine operators and other unrepresented workers at Trayer Engineering voted to join IBEW 1245 in February of 2020.

“It was a pursuit worth fighting for,” said Trayer Engineering welder Efren Chavez, celebrating the hard-won victory that he and his coworkers have finally claimed. On Monday, February 10, 2020, the unrepresented production workers at Trayer voted to organize into the existing Local 1245 bargaining unit. They won by 15 to 2, with 17 of 19 eligible voters participating in the election. This election vindicates a previous election held in 2018, which ended in a tie.

A Long Road to Victory

Workers at Trayer Engineering Corporation have been making high quality switchgear for many years, first in San Francisco, and then in San Leandro after the company relocated in 2019. An IBEW-represented unit has existed at the company for some time as part of Local 2131, and six years ago, that unit came into Local 1245 through the merger of the two locals. There was also a separate unit comprised primarily of welders and machine operators, represented at the time by a different union, Sheet Metal Workers Local 104. After their bitter strike at Trayer, during which management locked out and permanently replaced many strikers, Local 104 disclaimed interest (or elected to no longer represent the bargaining unit) in July of 2015.

For these unrepresented workers, the insecure and respectless nature of working without a union quickly became apparent. Within seven months, a desire to organize into IBEW arose among them — but the greatest hurdle for them was the fear of losing their jobs. They were, after all, originally hired to replace strikers.

“Since Day One, the company was in full force to divide and conquer,” said Local 1245 Shop Steward and Organizing Steward Arnaldo Lizarraga, who had been working at Trayer throughout this tumultuous period of time. “But I knew the welders would eventually organize once again.”

Lizarraga has been showing solidarity with his unrepresented coworkers from that same Day One. When they expressed their interest in organizing in early 2016, he and Local 1245 organizers Fred Ross and Eileen Purcell met with a handful of welders to talk about the union difference and what it would take to organize. Unfortunately, they were beset by trouble from the start. Word got out to management, and days later the workers were forced to attend an anti-union captive audience meeting (read more about this union-busting tactic here). During that meeting, a welder who had been vocally pro-union spoke out against what he felt was an effort from management to stop him from exercising his right to organize. Days later, he was fired. The rest of the workgroup, understandably intimidated, put organizing on hold.

A year passed by, and the indignity of their non-union work rested heavily on the minds of the welders and operators. Lizarraga helped organize a second meeting with the workers and myself in early 2017. Despite a strong showing of interest and good attendance, it would be the last union meeting for almost a year.

A Real Organizing Campaign and a Hard Loss

By the winter, the dissatisfaction had grown yet again and the union conversation was rekindled. Lizarraga facilitated two meetings for his coworkers so they could discuss the challenges they would face and mount a plan to overcome them. In a December 2017 email to the IBEW staff organizers, he shared his thoughts:

We started talking about the issues then how the union could handle those issues. We rated the welders on who is willing to organize. It was a great meeting. I’ve identified 2 [Volunteer Organizing Committee members], Efren [Chavez] being one of them.

After the progress of these early meetings, a strong showing met in spring at a restaurant in San Francisco, again assisted by Lizarraga and I. At this meeting, a volunteer organizing committee (VOC) formed and came up with a plan both to build support for organizing among the workgroup and to thoroughly educate their coworkers about the union difference, as well as the anti-union tactics the company might employ against them, and their rights under the law.

“As soon as I knew it was the best choice for me, my family and my coworkers, I knew I had to persist,” said Efren Chavez, one of the VOC leaders. He and the rest of the VOC knew that they would face an uphill battle, and the company’s management ensured that they had one. As union meetings began in earnest and the workers signed the authorization cards needed to petition for an election, word finally reached management. This time, the company hired a union buster — a high price consulting firm that helps employers destroy organizing campaigns through intimidation, misinformation, and other dubious tactics.

Over the next few months, the unrepresented workforce faced a barrage of tactics meant to magnify fear of reprisal and distrust of the IBEW, despite the fact that a thriving IBEW-represented unit worked for the same employer, under the very same roof.  When the workers petitioned the National Labor Relations Board for their union election, management dug in their heels and refused to agree to the terms of the election, arguing that it was inappropriate for the unrepresented unit to join the existing one for a number of unfounded reasons. This obstinance resulted in a hearing, which forced the need for three workers to testify to defend the union’s petition. They faced cross examination by the company’s own attorney over a period of eight hours before an administrative law judge. Ultimately, the union prevailed when the ruling upheld all of its positions — but the maneuver had bought the company more time to wage its campaign against the workers.

The weeks leading up to the election included frequent captive audience meetings full of anti-union messaging, one-on-one conversations between supervisors and workers, letters home filled with misleading or outright false claims about IBEW, and thinly veiled threats to workers about their futures at Trayer if they were to organize. The specter of the Local 104 strike was brought up frequently and in detail, as if to remind the welders that they were replaceable. Even on the morning of the election, the union busters were out on the production floor and in welding booths, getting in a last few words, and clouding the right choice with the fear of the unknown.

Unfortunately, it worked. When the last ballot was counted on the morning of May 21, 2018, the tally was 9 Yes, 9 No to unionize. In a union election, a tie is considered a loss because it does not establish a majority. Furthermore, to lose a union election means a workgroup cannot petition for another election for at least a year.

“When we lost, it was devastating. But then I thought, I’m just going to have to understand why we failed, rethink my strategy and do it again next year,” Chavez said, reflecting on his thoughts after that loss.

Still, despite the disheartening turn of events, the organizing conversation did not die. After more than a year of unkept promises from management and a return to business as usual, the unit began to meet among themselves to decide if they wanted to make another go of it.

The second organizing campaign officially began in early November 2019, and once again I served as the facilitator. The first order of business: to undertake an honest reckoning as a group about what happened in the last election, and how they would use that experience to overcome  challenges they may face the second time around. The importance of that assessment would become apparent immediately— Lizarraga spotted the same union busters from the last election on site only five days after the first union meeting.

The VOC could waste no time dusting off the experience they gained as organizers in 2018. Authorization card signing began only a week later, union meetings were always well attended, and support for organizing was constantly assessed and grown. Additionally, the VOC thoroughly prepared their coworkers for the anti-union tactics and talking points that would come from the company and its union busters.

“Our biggest challenge to organizing was getting everybody on the same page,” said Chavez. “Much of the information our guys had about the union was from the union busters from the previous year. They made every attempt to spread fear and manipulate us.” 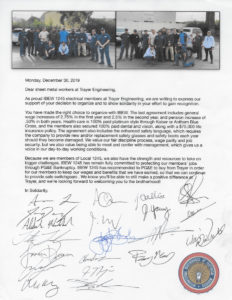 When a supervisor went to the welders and operators to spread lies about IBEW, Lizarraga recruited his other IBEW coworkers to undersign a letter of support, which reminded the non-union workers that the successes of organizing are attainable, and that they were looking forward to welcoming them into the brotherhood of our union.

Management’s anti-union campaign was not all that different from 2018, employing many of the same rote propaganda and intimidation tactics. In a second effort to stall the election over the proposed bargaining unit, the company’s legal counsel fought for the exclusion of a number of workers from union representation. Thankfully, a compromise was reached only hours before the scheduled hearing, and the election went forward as planned.

The morning of February 10 finally came, and tensions were high. But when the ballots were finally counted, every ballot was Yes until the final two ballots — the only two No votes — were read. As soon as the NLRB agent completed the official tally of ballots, Chavez (the union’s election observer) went out into the lobby of the plant, where he and his nervous coworkers broke into smiles, sighs of relief, and cheers of victory. A celebratory photo was taken in the parking lot, complete with a union banner and IBEW flags that Lizarraga brought from the Local 1245 hall. 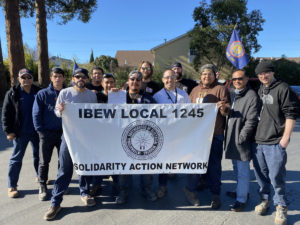 The Trayer workers snapped this celebratory photo shortly after the results of the union election were announced.

“Organizing the Welders was a great experience. An experience of perseverance and patience,” said Lizarraga. “I didn’t lose faith in the welders after the last election, and after winning the second election I feel the wall of division has come down and the Brotherhood has started in the shop.”

The newly organized unit began drafting bargaining proposals mere days after their victory, wasting no more time after the years of fighting and waiting. Now that both units are merged, the Trayer welders, machine operators, brake operators, and materials handlers will bargain over their proposals as part of the existing Local 1245 collective bargaining agreement. They have a unique opportunity to hit the ground running, as Local 1245 Business Representative Cruz Serna had already made plans to have the first bargaining sessions with the company imminently. Our new brothers at Trayer are ready to put the years of struggle behind them, and will no doubt add strength to our union as they move forward in dignity and solidarity.