What is the Census?
Every 10 years, every resident in the United States is counted, providing valuable statistics and information about the status of our communities, and our country. The census counts our population and households, distributing more than $700 billion in federal funds annually to support states, counties and communities’ vital programs.

Why does it matter for unions and workers?
The funds the federal government allocates based on the Census results provide critical services to our communities and support thousands of good union jobs. For example, based on population, California will get a share of the federal government dollars for infrastructure projects. That means better roads for commuters, safer bridges for drivers and upgrades to our electrical grid to help prevent wildfires and blackouts.

How does it affect our union?
The federal funds based on the Census results support hundreds of thousands of jobs in the public and private sector. Because those jobs are mostly union, it has a huge effect on our union’s membership. If California is undercounted in the Census, that could mean the loss of funding that support’s many of our members’ jobs. California is a large and diverse state. We need those funds to effectively provide services in our communities and to support good union jobs that build our middle class.

How do we make sure immigrants are counted?
There’s been a lot of fear-mongering that makes it more difficult for immigrants to participate in the Census. Families are scared they’ll be targeted if they provide information to the government. While this isn’t an unfounded fear, we’ve made sure that there are multiple layers of protection to keep sensitive information out of the hands of those who would target immigrants. If immigrant families fill out the Census online, they’re less likely to have Census enumerators show up at the door. Participating also gives immigrants a voice to ensure they are counted as members of the communities in which they live and work. In California, it’s absolutely critical to have the participation of immigrant families. The labor movement is working with immigrant rights’ groups to ensure that the process is easy and safe, leading to more opportunities for immigrant families. 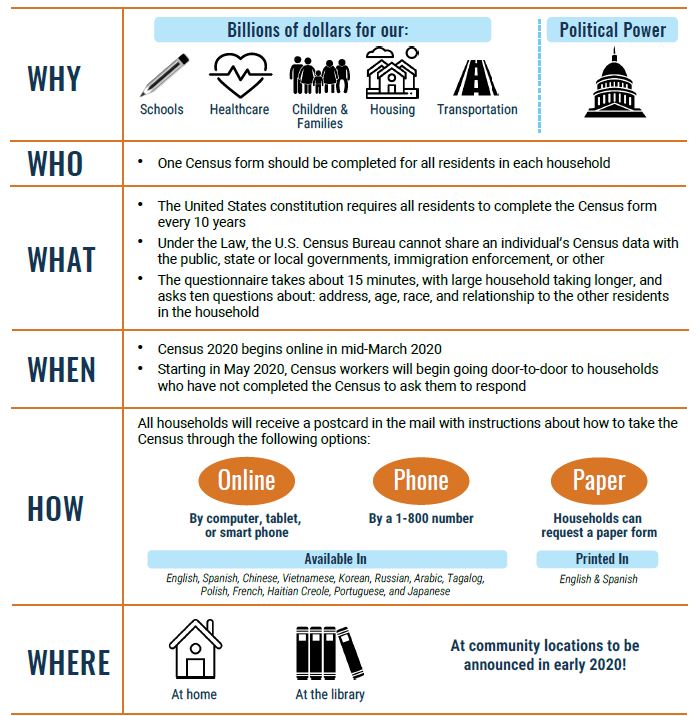