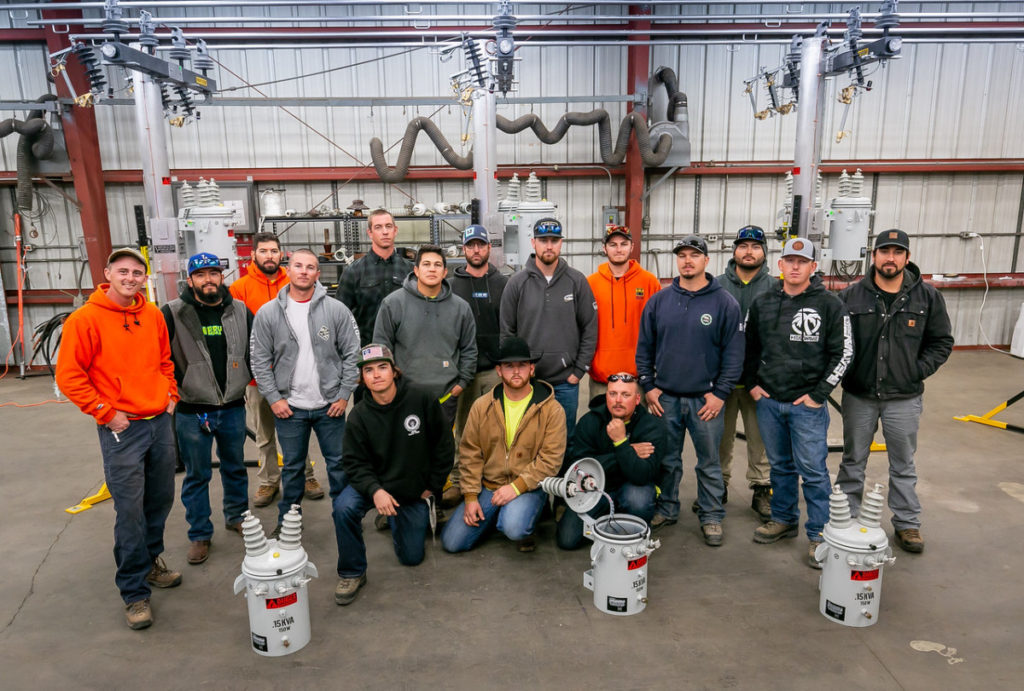 Fifty years ago, IBEW teamed up with the National Electrical Contractors Association (NECA) to establish the California-Nevada Power Lineman Apprenticeship Training Program (Cal-Nev JATC), a not-for-profit entity designed to ensure the electrical industry in our region would have a steady supply of qualified workers for generations to come. Over the past five decades, the Riverside, CA-based Cal-Nev JATC has educated, trained and graduated thousands of top-notch linemen, preparing them for rewarding, quality careers in the utility industry as members of IBEW Locals 1245, 47 and 396.

In recent years, the magnitude of work needed to build and maintain a safe and reliable 21st-century grid has increased exponentially, and as a result, the demand for linemen has been growing at a breakneck pace. Because more skilled and trained hands are sorely needed right now and for many years into the future, the Cal-Nev JATC has expanded significantly. Whereas in the past the program has only accepted applicants once per year, applications were accepted during two different periods in 2019. While the JATC has been increasing its capacity, the Riverside facility simply doesn’t have sufficient space to train the volume of linemen required to complete this work. 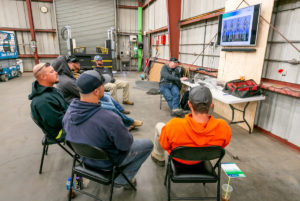 The Cal-Nev JATC trustees have been working for nearly two years to establish a second campus in northern California in order to train even more apprentices and keep up with the high demand for linemen. The trustees meticulously considered four different properties before finally settling on a 13-acre property in Woodland, CA. Plans are underway for this new state-of-the-art training center — but the grand opening of that facility is still a year away, so in the meantime, the JATC has found a temporary, part-time home in Sacramento, at the site of a former Campbell’s Soup Factory. The 6,000 square foot warehouse is far larger than the SMUD training center that the JATC had been using for its Saturday classes and can accommodate significantly more apprentices, as well as the JATC’s new Trans Banker transformer simulator.

When the Utility Reporter stopped by the old soup factory one Saturday in mid-November, 16 apprentices from IBEW Locals 1245 and 47 were on site to complete their classroom hours. They spent their day attending lectures from expert instructors, working on assignments, and gaining hands-on experience through supervised, simulated practicum. 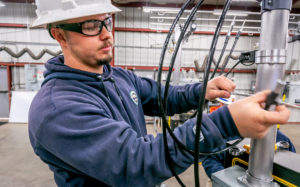 “They are teaching me everything I need to know about my job, what I need to do, and what I need to look out for,” said third-step IBEW 1245 apprentice Klint Williams, who currently works at Plumas-Sierra Rural Electric Co-op. “I’ve learned a lot about the history of both the JATC and NECA, and they’ve taught me everything, from what a groundman does, installing grounds, pulling in wire, and just doing regular line work.”

First-step IBEW 1245 apprentice lineman Michael Andreotti also values the time spent at the training facility, noting how it ties into the experience he’s gaining on the job. 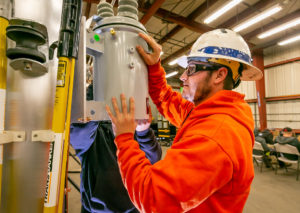 “The classroom stuff is really good. The teachers are right there, helping you out, and there’s a lot of hands-on. We’re doing the grounding class right now, and we’re going way more in depth than out in the field,” said Andreotti, who works currently for Wilson Construction. “We go over a lot more different situations out there. For example, we know what you can use slack box on and what you can use other stuff on. And in here, we’re learning all the formulas for the tension through the blocks and all that — so it translates to what we’re doing out there.”

IBEW takes pride in its apprenticeship program, which emphasizes safety on the job, close attention to detail and a thorough understanding of how the distribution and transmission of power works. Both Williams and Andreotti value the wide range of experience, knowledge and skills they’re acquiring through the apprenticeship program.

“It’s very physical. You are always working with your hands. But you’ve also got to use your head, you’ve got to be smart,” said Williams. “It’s definitely a tough job. I really enjoy that. I like using my head and using my hands.”

“I like transmission because you’ve got helicopters, and big buckets, and crane baskets, and stuff, but I also like distribution because … there’s a lot of different things to take into account for, and you have a lot more to do,” said Andreotti.