On Thursday, Sept. 5, IBEW 1245 Business Manager Tom Dalzell gave a special briefing on the PG&E bankruptcy to a group of more than two dozen IBEW 1245 retirees. The retirees traveled from the Sacramento area, the Bay Area and the Central Valley to attend the briefing at the Local 1245 union hall in Vacaville. They averaged 35 years of service. Local 1245 Business Reps Keith Hopp and Lou Mennel (who represent the Sacramento retiree group) also attended, as did Organizer Rene Cruz Martinez. 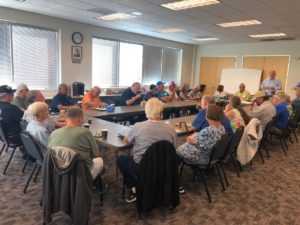 Dalzell welcomed the retirees and proceeded to explain the enormous amount of time that he’s put in to the bankruptcy, along with very strong team of 1245 staffers, including Bob Dean, Hunter Stern, and Doug Girouard (who represents 1245 on the unsecured creditors committee), as well as our regulatory lawyer Marc Joseph, our lobbyist Scott Wetch, and  one of the nation’s top bankruptcy law firms.

Dalzell started his presentation by detailing all of the landmark worker protections that 1245 won through the passage of AB 1054 in July, while simultaneously thanking the retirees for their active participation lobbying legislators in Sacramento to get the bill passed over the summer. He then explained the complex cast of key players who are actively involved in the bankruptcy proceedings, including various hedge funds and bond holders, as well as the company’s new Board of Directors.

In response to a question about pensions, Dalzell firmly declared, “We have a moral duty to protect retiree pensions!” He reassured the group that their pensions are fully protected and are not part of the bankruptcy proceeding, and PG&E has continued to fully fund the pension despite the bankruptcy. Additionally, he noted that retiree medical is also protected and is outside the bankruptcy. 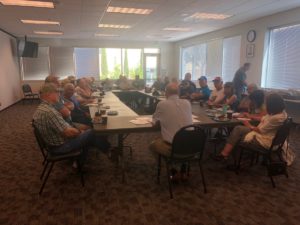 He explained that much of the union’s success in protecting members and retirees during bankruptcy stems from 1245’s growing political power and influence that’s been cultivated by our organizing stewards, the emergency response team, and the increased engagement from retirees. He told the retirees how the organizing stewards program has placed trained 1245 organizers in 15 campaigns across California and six other states in 2018 alone — and in 26 states (often in solidarity with other IBEW locals in organizing efforts) since 2011. Dalzell presented a key example out of Missouri, where the IBEW locals asked us to send troops to help defeat a statewide anti-union “right to work” ballot initiative. Local 1245 sent eight organizing stewards to St Louis and Kansas City to help get the vote out, contributing to organized labor’s enormous success in defeating the initiative. And in 2018, when 1245 needed assistance to defeat Question 3 in Nevada, we reached out to IBEW locals across the country and 14 locals responded. Now, the IBEW has a mutual aid pact with sister locals for future battles! Dalzell recognized the work that the staff organizers — Eileen Purcell, Rene Cruz Martinez and myself — have played in building this powerful program.

At the end of the meeting, 25-year shop steward and retiree activist Ruth Bailey, who went to Sacramento to lobby legislators in both July and August, asked Dalzell: “What’s next? How can we keep helping ?” In response, Dalzell thanked the group again for stepping up to defend their union and asked them to “stay tuned” and be at the ready. When asked for a show of hands to see how many are ready to go back to Sacramento, all 25 hands immediately shot up in the air!

The retirees expressed how much they appreciated Dalzell taking the time to brief them and take their questions – and most importantly for inviting them to join with active members to take action to protect their benefits and strengthen 1245!