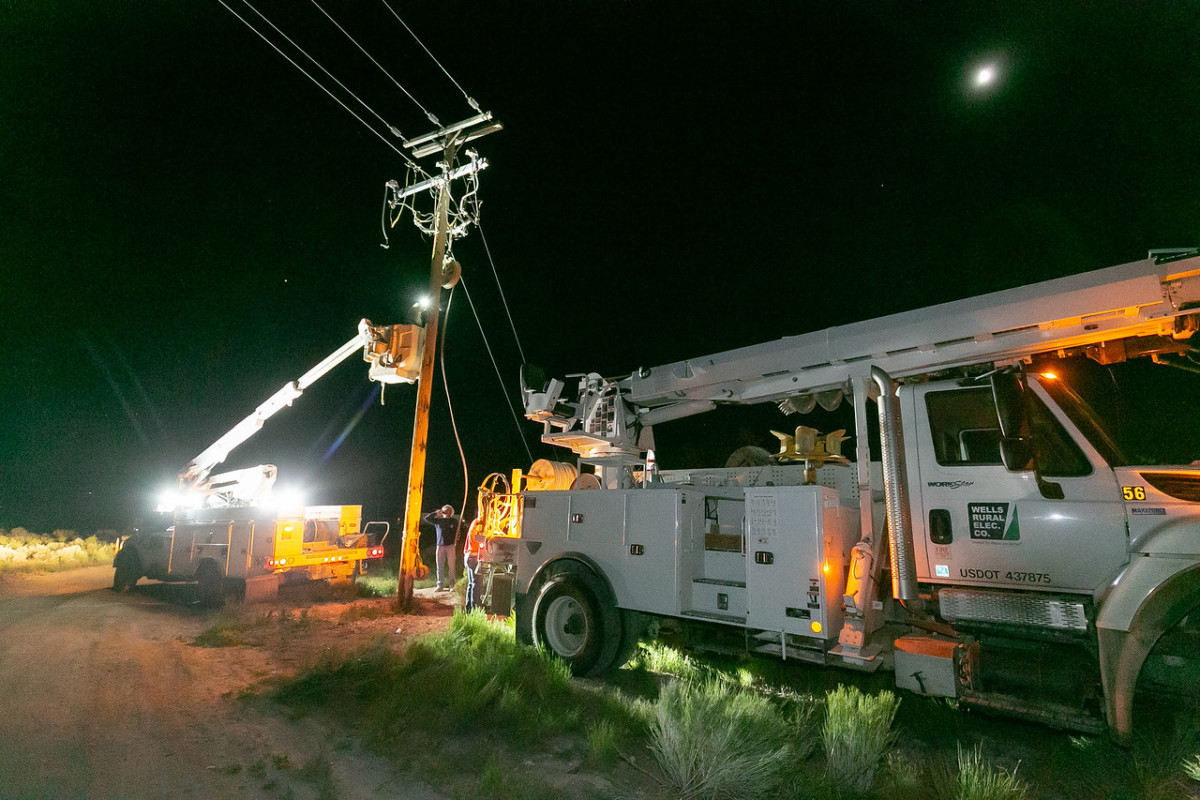 IBEW 1245 Linemen for Wells REC work through the night to resolve an outage at a motel in Wells, NV

From bustling coastal cities to tiny desert mining towns, IBEW 1245 members deliver power to millions of homes and businesses in thousands of communities every day. The IBEW 1245 members who work for the Wells Rural Electric Company (WREC) are no exception. This small but mighty team keeps the lights on for more than 6,000 customers spanning over 10,000 square miles in remote northeastern Nevada, including the quaint towns of Wells, Carlin and West Wendover in Elko County.

Powering Through, Day or Night

Chris Duffy is a six-year IBEW member and journeyman lineman with Wells Rural Electric. When the Utility Reporter caught up with him and his crew, they were working through the night to address an outage that occurred at the Wells Motel 6, one of the few hotels situated in this area of Nevada. 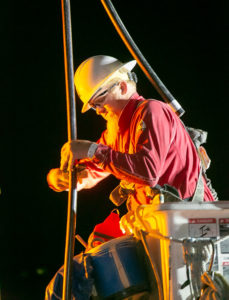 “I was at home holding my twin babies when I got a call about some bad underground,” Duffy said. “I headed over with the boys and went through a tailboard to see what we needed, and then rallied up at the shop to get material and trucks.”

Underground projects are inherently tricky as the lines aren’t exposed, so identifying where the problem lies takes a bit more finesse. Working at night also added to the difficulty of the job, but the 1245 crew took it all in stride.

Duffy and his team worked together to remove the faulty wire, and then used a line truck to pull the new wire. They had to re-terminate, ground and unground the line, heat it, test voltage, and finally hook the transformer back up — all in a night’s work. They began the job around 11pm, and worked until dawn to finish it up just as the hotel patrons started waking up to start their day. 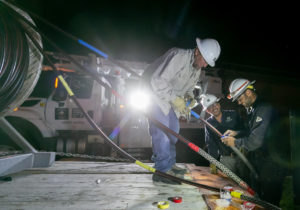 Despite the long night’s work, the crew remained in good spirits. Duffy reflected on the tangible and intangible advantages of being a member of IBEW 1245.

“There’s a lot of good about the union,” he said. “It supplies us with a very good job and benefits and the pay. And we all stick together and create a good work environment so we can go home safe and healthy.”

About 70 miles southwest of Wells lies a town called Carlin, which happens to be one of the most productive gold-mining areas in the United States. Although small, Carlin is growing, and their power needs are increasing as well. 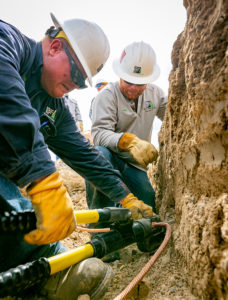 When the Utility Reporter visited Carlin, another WREC crew was hard at work at a shared substation, where NV Energy manages the transmission side, and supplies WREC with the energy for distribution. WREC lineman and 13-year IBEW member Jake Wines explained the project he was working on at the substation.

“We’re installing TS2 metering ahead of a whole metering change-out in the area, commercial and residential,” he told the Utility Reporter. “We will also be installing a pad mount three-phase transformer.”

The project is unique work, as the area primarily uses an overhead system, but this is an underground project with four different sizes of conduit and a custom design to fit. WREC is not a big company, which means each and every member of the team must be versatile and dedicated to getting the job done, even when it is not a typical day.

For Wines, the IBEW apprenticeship is what enables him and his hard-working crew to do what they do every day. 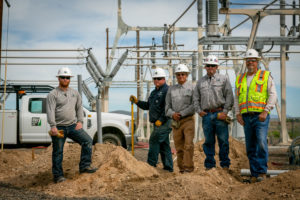 “It’s the best apprenticeship a lineman can go through, learning from the best hands in the trade,” he said. “We have an apprentice working with us now, and I am trying to share with him everything I know — and everybody else does the same thing.”

Wines knows that not everyone is getting that same level of training and experience, and he recognizes the risks those workers face and the dangers that can ensue.

“In this area where we work, there are a lot of [non-union] contractors. The guys aren’t trained and they’re underpaid, and it’s kind of scary,” Wines said. “Something like that would never happen in a union. With a union, you’re safe, you’re trained and you’re always working among folks that are also well-trained. That’s the key to going home every night.”