When IBEW 1245 founder Ron Weakley passed away several years ago, he left a box of his cufflinks to 1245 Business Manager Tom Dalzell. At the quarterly Advisory Council meeting in Reno, Dalzell bequeathed a set of Weakley’s cufflinks to Ron Borst, president of 1245’s Reno-Sparks Retirees Club and a longtime 1245 activist who helped launch Local 1245’s organizing renaissance. 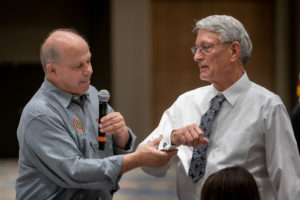 “Around 10 years ago, Nevada Energy, which had traditionally had a good collaborative relationship with 1245, had a rogue CEO named Michael Yackira, who went to extreme lengths to strip away our retirees’ medical benefits that they had earned over the years,” Dalzell told the Advisory Council. “But the retirees rose up in an amazing way, and we launched a campaign against Nevada Energy to win it back, all with the leadership of these retirees. Two things happened as a result of this campaign — one is we won. And the other thing that happened was a radical transformation of IBEW 1245.” 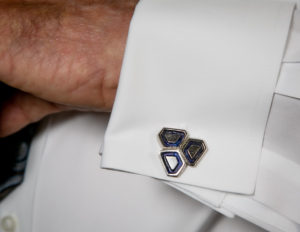 Dalzell went on to explain how the retirees, including Borst and several others in attendance, inspired 1245’s ground-breaking organizing steward program, which has proven to be remarkably successful and has transformed the union into the organizing, legislative and political powerhouse that it is today. He then brought Borst up, flanked by his fellow NV Energy retirees, including his wife Vicki, and presented him with the cufflinks, along with a 50-year pin.

Borst graciously accepted the thoughtful gift, but his wife had a surprise in store for Dalzell.

“Ron and I are very honored with the presentation of the memorabilia of Ron Weakley for Ron’s 50th anniversary of being in IBEW,” she told Dalzell and the rest of the union’s leadership. “Ron asked me to inform you that yes, he will wear the cufflinks, but in the very distant future, he plans to make a slate case for the set and present them back to the hall to be displayed.” 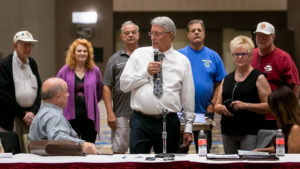 Borst in turn gifted Dalzell with an IBEW coin, which were commonly carried by IBEW members back in the days when Borst worked at the utility. He had collected several such coins to incorporate into the hand-crafted IBEW coffee table that he created and gifted to the union several years ago (which can be seen and enjoyed in the lobby of Weakley Hall), and he found it fitting to pass along the extra coin to Dalzell.