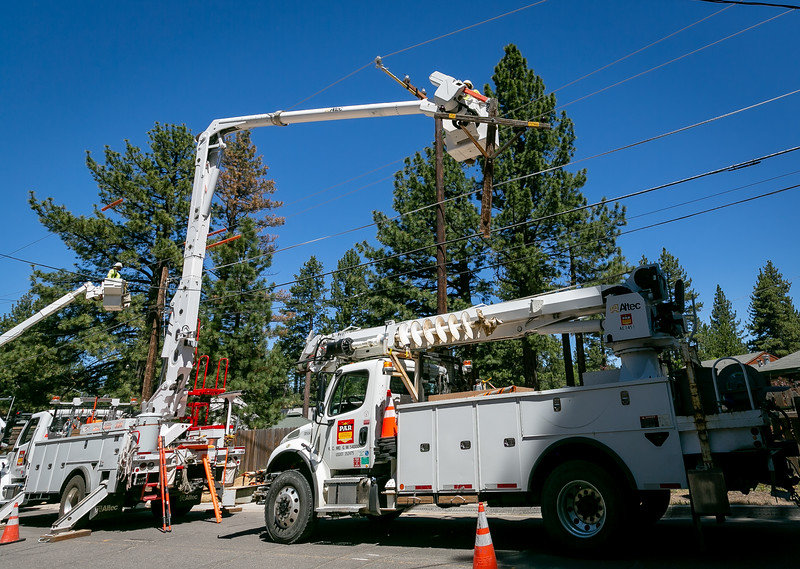 Last year, the South Lake Tahoe Planning Commission approved a proposal to improve Verizon cell service in the area by attaching a series of signal boosters to the tops of certain utility poles. In order to make this happen, the poles, which belong to Liberty Utilities, would need to be extended above the 14.4 KV line so the new antennas could be installed on the pole tops. Liberty, an IBEW 1245-represented utility, contracted with PAR Electric, a 1245 signatory contractor, to conduct all the work above the primary, including the new taller pole construction as well as the installation of the antennas. 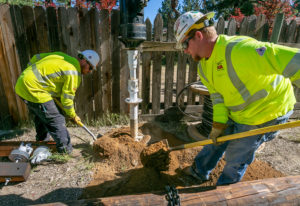 The Utility Reporter caught up with a five-man doc line crew from PAR as they worked on one of these 12 projects, located near the intersection of O’Malley and Carson in South Lake Tahoe.

“Right now, we’re mainly going through changing out poles and changing out transformers, and then we’ll come back and hang antennas and do the testing with the Verizon contractors. Everything’s going pretty well so far,” explained PAR General Foreman Andy Paulson, an 18-year IBEW member. “The only thing that’s unusual is there are four different Verizon [telecommunications] contractors that we’re working for. So everybody’s under Verizon, but they have four different contractors and all four of them are different —  some of them are really good at what they’re doing, and some of them aren’t. So that’s the only difficulty.” 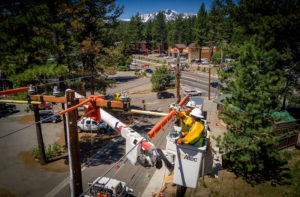 Bob Kellogg and Justin Jacobson working together in the bucket

The 1245 crew worked together seamlessly to complete a pole change-out. Justin Smith and Justin Washabaugh dug the hole and prepped the pole, and Bob Kellogg and Justin Jacobson worked from the bucket. Paulson and Smily Stahl from Liberty oversaw the work to ensure it all went smoothly.

Paulson credits IBEW 1245 with the fact that he gets to work alongside some of the most skilled linemen in the country.

“The union’s provided myself and all my union brothers with a great living, it’s provided really well for my family. I feel like the brotherhood is really strong, it keeps us really all on the same page as far as working safe and wanting to work safe,” he said. “There’s a lot of us that are really in-tune and want to keep the union strong and to keep it what it is, to keep good guys in here.”

Casey Kelley contributed to this report.