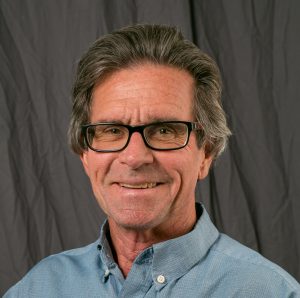 After 13 years on staff at IBEW 1245, Business Rep Pat Waite will be retiring from the union this spring.

Waite first joined the IBEW in 1976, as a groundman out of Local 47. He went on to complete his line apprenticeship and worked as a lineman, line crew foreman and troubleman at Southern California Edison, where he was employed for a total of 15 years. In 1991, he went over to Puget Power (Local 77) where he worked as a lineman for another five years before coming over to Truckee Donner PUD (Local 1245), where he worked for 10 years as a lineman and substation lineman.

As a rank-and-file union member, Waite proved himself to be a staunch advocate for his fellow workers. He served as a shop steward for Local 47 when he was at SCE, and helped review bargaining proposals as a member of Local 77’s large bargaining committee during his time at Puget Power. He also represented his fellow Local 1245 members as a shop steward, bargaining committee member and labor-management committee member when he worked at Truckee Donner PUD.

After 30 years in the utility industry, Waite joined the Local 1245 union staff in 2006 after making quite an impression on Local 1245 Senior Assistant Business Manager Dennis Seyfer.

“Pat is the first person I hired to be a rep. I interviewed a couple of candidates that day, and Pat made my decision easy,” said Seyfer. “Over the years, Pat has proven to be an invaluable advocate for our members and a pleasure to be associated with.”

During his 13-year tenure as a business rep, Waite achieved enormous gains for multiple workgroups. In 2010, he worked with members at the City of Roseville to secure a contract that ultimately led to the union winning an $800,000 settlement for the members through a PERB case. He also helped negotiate CalPERS retirement benefits for members at Truckee Donner PUD, and worked to unify the members at TMWA during a particularly contentious round of bargaining in 2017.

Senior Assistant Business Manager Ray Thomas has served alongside Waite on numerous bargaining committees over the past 22 years, and has always been impressed by Waite’s demeanor, commitment and confidence under pressure.

“At every table, Pat was recognized by all as a consummate professional,” said Thomas. “He never stopped fighting for our membership.”

Waite also served as the business rep for Local 1245 members at NV Energy, taking over the role shortly after 1245 endured a brutal anti-union drive led by former CEO Mike Yakira that resulted in something of a stalemate between the union and the company. While some might have shied away from such a difficult situation, Waite entered into it willingly, and managed to negotiate a top-notch collective bargaining agreement. He’s continued to bargain aggressively for the members at NV Energy, with essentially no concessions over the past nine years — even after Berkshire Hathaway took over NV Energy.

“Pat’s assignment with Nevada Energy placed him in the jaws of the lion … and when Berkshire Hathaway acquired NV Energy, Pat faced a whole new challenge — new management that had earned a reputation of playing with sharp elbows when negotiating with other IBEW Locals,” recalled Business Manager Tom Dalzell. “Through perseverance, open dialogue, and taking risks, Pat reshaped the relationship with Berkshire.  After several years, the IBEW-BHE relationship had emerged as the most collaborative utility relationship in the country, thanks in no small part to Pat.” 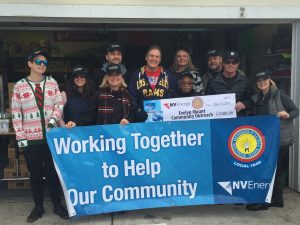 Waite (in the black vest) helped usher in a new era of collaboration between IBEW 1245 and NV Energy after it was taken over by Berkshire Hathaway. Pictured here is a joint union-company endeavor to support a local food pantry in Reno.

In addition to his gains at the bargaining table, Waite is well-known around the union hall for his outstanding accounting skills and his noble work as a trustee for the union staff’s own pension plan.

When asked what he’ll miss most about working at Local 1245, Waite said he’ll always remember “working with great union members from the various agencies I represented over the years and the assistance they provided with bargaining and labor relations.”

He also feels grateful to have worked with stellar managers who empowered him to be the best rep he could be.

“I’ve had the privilege of working under the direction of Tom Dalzell and witnessing first-hand his progressive forward thinking and the positive outcomes. Dennis Seyfer has been the best leader to work for. Always giving the latitude to make my own decisions, yet always there when I needed him to provide some muscle,” he said. “And Ray Thomas is probably the most knowledgeable IBEW 1245 employee, and he will always get back to you no matter how small or large the issue.”

His managers had kind words for him as well. 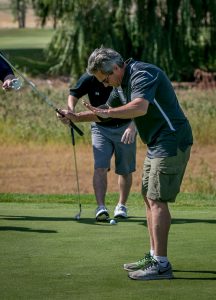 “As he steps into the next phase of his life I hope he has a long and adventurous walk,” said Seyfer.

“It was my honor to work alongside Pat, and I wish him a long and fulfilling retirement, he certainly has earned it,” added Thomas.

“Pat Waite was born to do what he has done for Local 1245,” said Dalzell. “I’ll always look back fondly on my long drives with Pat from Reno to eastern Nevada, meandering conversation and killer mix rock tapes.”

An avid outdoorsman, Waite plans to kick off his retirement with an ambitious hike through the Pacific Coast Trail. He’s also looking forward to spending more time bike riding and playing tennis.