Sixteen-year IBEW 1245 member Steve Lange doesn’t consider himself to be a “political person.” But when the union presented him with a unique opportunity to get up close and personal with California’s new governor, he couldn’t pass up the chance.

Lange, a Paradise, CA native who has been working in the Camp Fire zone since the day after the blaze leveled his hometown, was invited to represent IBEW 1245 at Gov. Gavin Newsom’s first State of the State Address, as part of a contingent of first responders.

“I was really flattered and honored to get that phone call,” Lange said, recalling the moment that IBEW 1245 Senior Assistant Business Manager Bob Dean reached out to him to see if he was interested in attending. 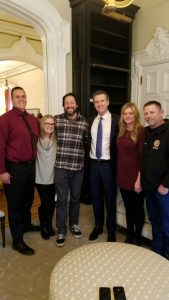 Steve Lange (far right) and his wife (to his left) with Gov. Gavin Newsom (center) and other first responders

Lange and his wife received gallery passes, which included a special meet-and-greet prior to the address. Lange had never even been inside the State Capitol before, so being escorted right into the Governor’s office was quite the unusual experience.

“My wife and I walked in, and there we were, right alongside Maria Shriver and the First Lady,” he added with a glimmer of awe in his voice. “It was very cool … almost surreal. It was something I’ve never been exposed to at that level. It was a lot to take in, and I was just trying to absorb everything that was happening around me.” 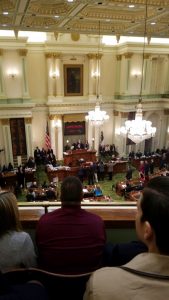 During the State of the State address, Lange was seated in the balcony with other first responders, and became acquainted with a nurse who had helped rescue people from the Camp Fire. They bonded over their shared experiences during and after the fire.

As the Governor prepared to begin his speech before a joint session of the California legislature, Lange’s attention turned to the podium below. While he doesn’t always agree with Newsom’s positions on some political issues, Lange’s impression of the Governor’s address itself was generally positive.

“Overall I was very impressed with Gavin’s vision for California,” he said, noting that he appreciated the fact that the Governor’s comments about the PG&E bankruptcy included a mention of fairness for the workers. “Whether or not it actually happens remains to be seen, but his vision sounds very good.” 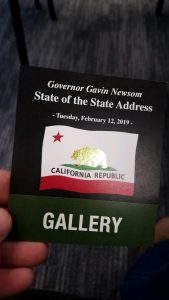 Once the speech was over, Lange and his wife were brought in to the Governor’s mansion for a private reception.

“That in itself was something else,” Lange said. “My wife, myself and other nurses and first responders from Paradise… just hanging out in the Governor’s living room.”

The entire experience left Lange feeling proud and humbled at the same time.

“It was such an honor to be there on behalf of 1245,” he said. “I’ve been working in Paradise pretty much the whole time since the fire, and it was kind of nice to get away from that for a little while and get some appreciation for the work we’ve been doing.”