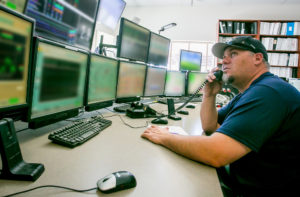 When summertime starts baking Nevada, you can count on the entire population turning on their air conditioners. You can also count on members of IBEW 1245 ratcheting up NV Energy’s Frank Tracy Power Plant just east of Reno to help meet the demand.

“Same every year,” says Plant Operator Brad Early. “We get really busy May to September. If it pushes 90-100 degrees we know we’re going to be running.”

The facility is home to a variety of natural gas-fired generators—including simple cycle and combined cycle—that add up to nearly a thousand megawatts of capacity. This can meet Reno’s needs with enough left over to help out with the much larger demand coming from Las Vegas. The operators are trained to work on any and all of the generators, as well as the water treatment processes that assure the purity of the water going into the boilers. 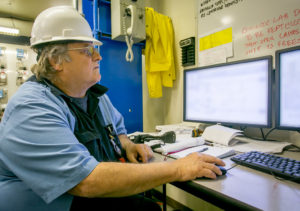 Water purity is also a major concern of Lab Foreman Grant Garrison, a 29-year IBEW member. When the Utility Reporter shows up asking questions, Garrison explains that workers are regenerating the “mix bed,” the final stage of cleaning the water “so that you have essentially pure water.”

IBEW 1245 members are qualified to deal with potential health emergencies at the plant, thanks in part to the efforts of IBEW 1245 member Jesus Leanos, who trains employees up to “first responder” status—meaning they know a heck of a lot more than just CPR. Leanos credits management for funding a “rescue trailer,” which houses a treasure trove of emergency life-saving equipment.

It doesn’t require high-tech equipment to detect the pride the employees here take in their work. Part of that pride comes from being in a union that gives you a voice on the job. And part of it is knowing that you provide a service that your fellow Nevadans rely on every day. 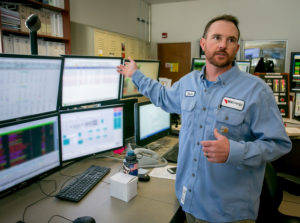 It also really helps to have managers who appreciate your contribution to the company’s success.

“I heard someone from Berkshire say that if you keep your employees happy, they’re going to do better work for you,” said Kevin Schumann, an operator and 10-year IBEW 1245 member. “And I think that’s true.”

“We work in a dangerous environment to begin with—electricity and steam. There’s always that potential for an accident out here,” says Jesus Leanos, whose job description is Instrument and Control but whose passion is the safety of his co-workers at NV Energy’s Tracy Power Plant a few miles east of Reno.

While the company provides all plant employees with basic safety training like First Aid and CPR, Leanos voluntarily sought out additional training on his own dime from the National Safety Council and American Heart Association so that he could help “train up” his co-workers to a higher-level of rescue work. Jesus Leanos, Instrument and Control, explains the function of the “rescue trailer,” a treasure trove of emergency life-saving equipment.

Leanos is happy to show you the “Rescue Trailer,” which houses about $150,000 of rescue equipment that Leanos hopes no one ever has to use. It includes equipment for “high angle” rescue (picture someone swinging in the air from a lanyard). It also has a self-contained breathing apparatus—several, in fact—that could be used in case of a fire or a low-oxygen environment. There is lots more in the Rescue Trailer, including litters in cases where immobilized people might need to be transported from a hazardous area.

From time to time there is a need for simple First Aid at the plant, Leanos says, but so far there has never been a need to use the more extensive equipment available from the Rescue Trailer. “Thank you, no!” he says.

As everyone knows, the best insurance policy is the one you never have to use. But in the 15 years it has been on-site, the Rescue Trailer has provided a healthy dose of peace of mind. Some employees might look at the extra safety precautions and training as a nuisance, but Leanos sees the larger purpose of staying vigilant.

“In reality, it’s for us. It’s for our safety so we can all go home at night,” he says. The company has shown it wants that too, something Leanos appreciates.

“ I’ve worked with companies prior to this company where it’s ‘Whatever you need to do to get the job done,’ and sometimes if that involves doing something risky then, well, there’s companies out there that take those short cuts,” Leanos says.

Leanos and his co-workers are working to make sure that short cuts are not part of the culture at the power plant.

“We don’t do that,” says Leanos. “I really like the attitude that we have here.”