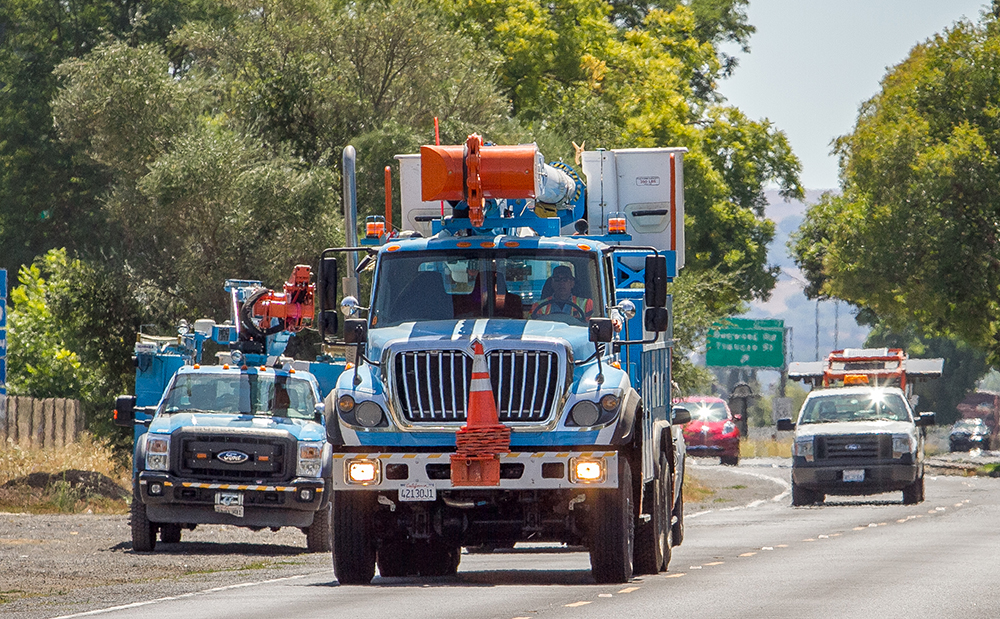 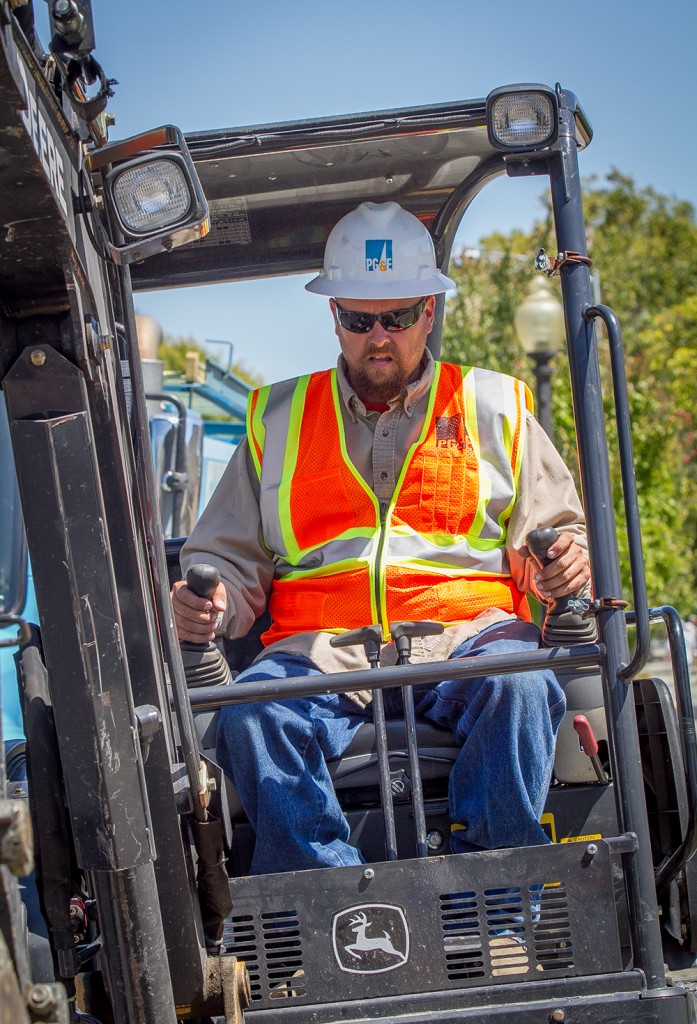 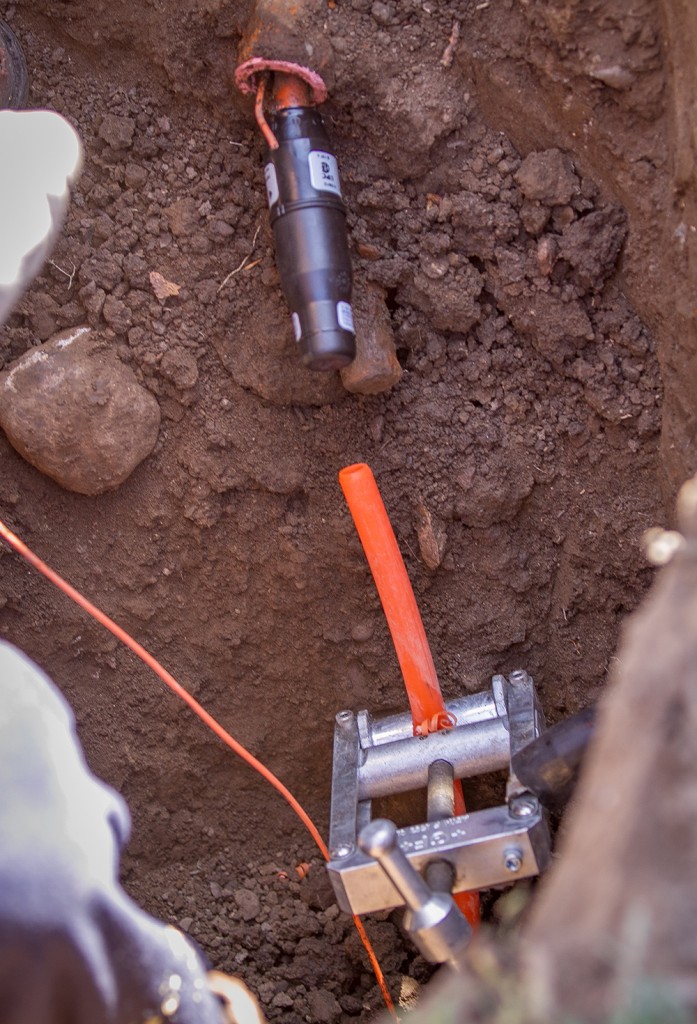 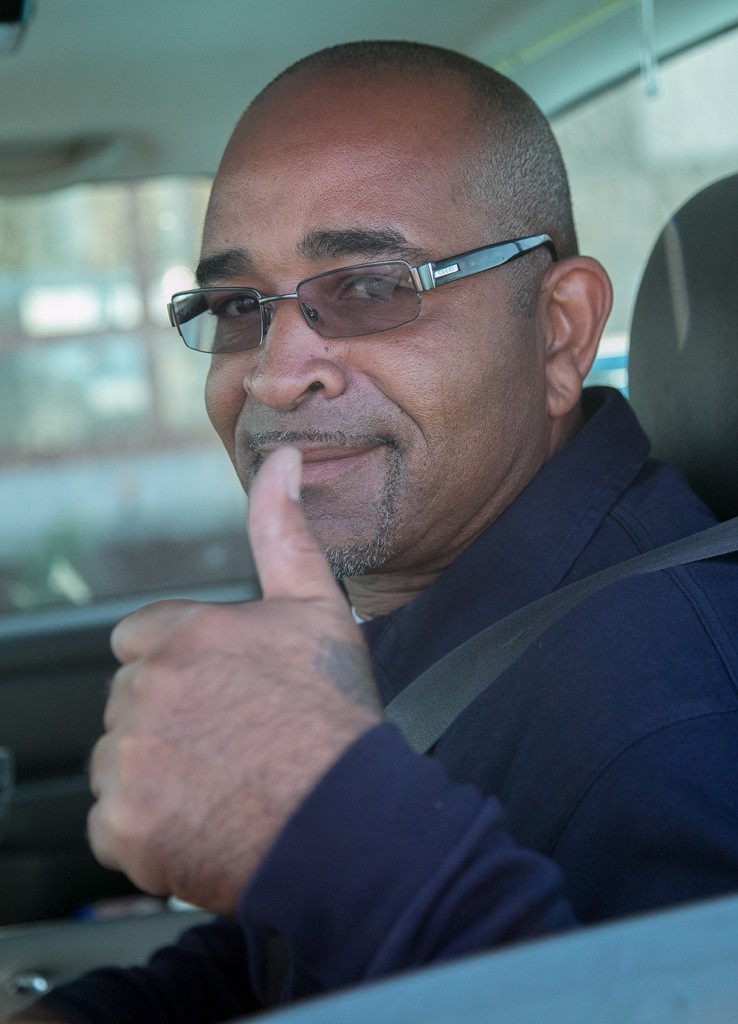 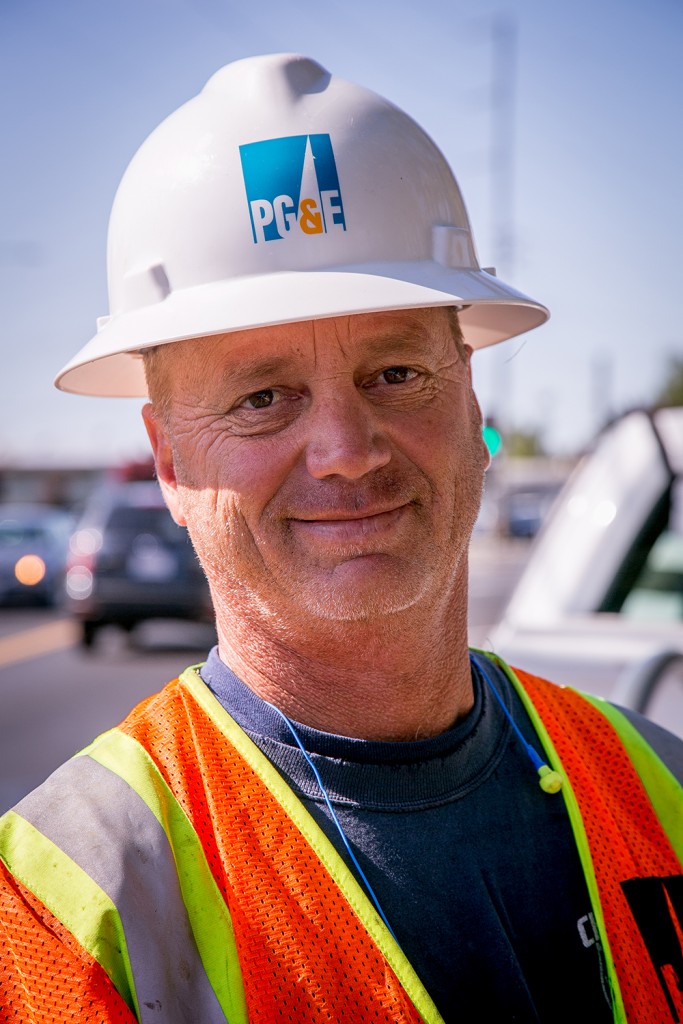 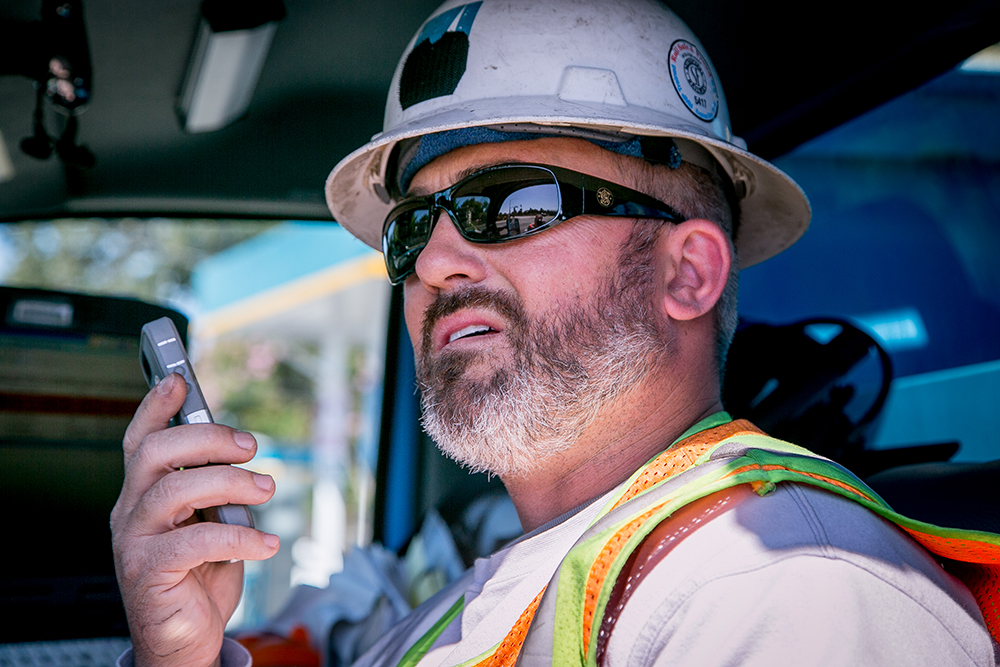 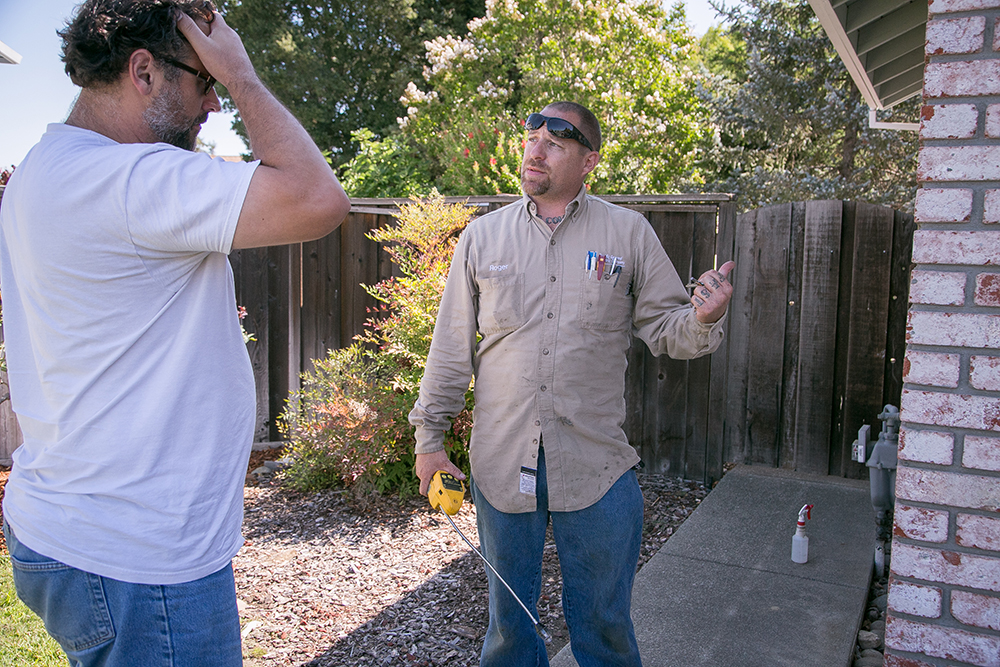 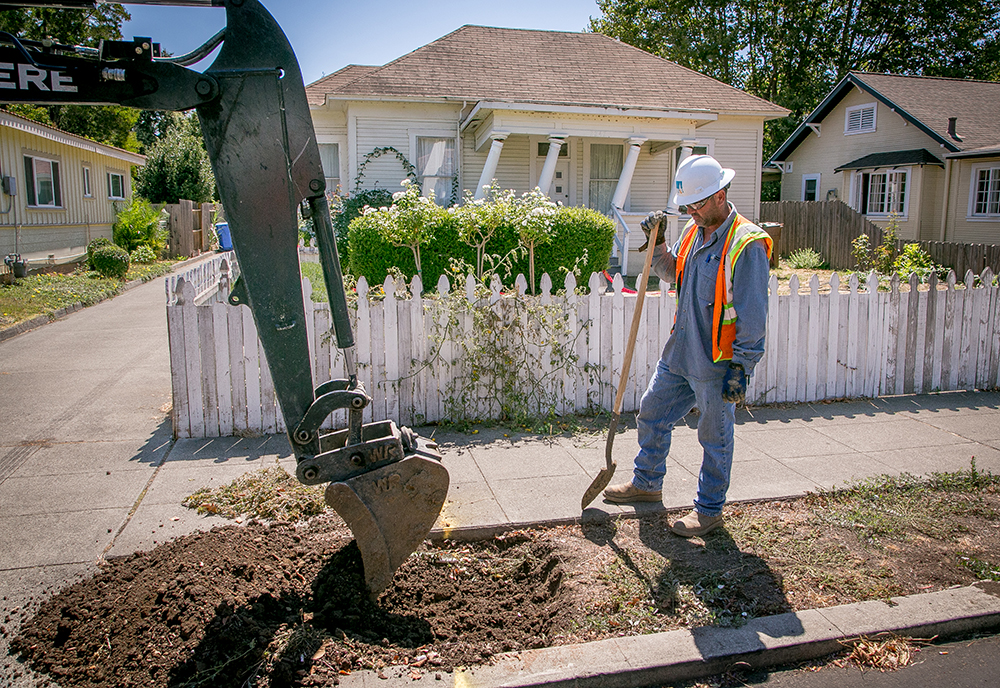 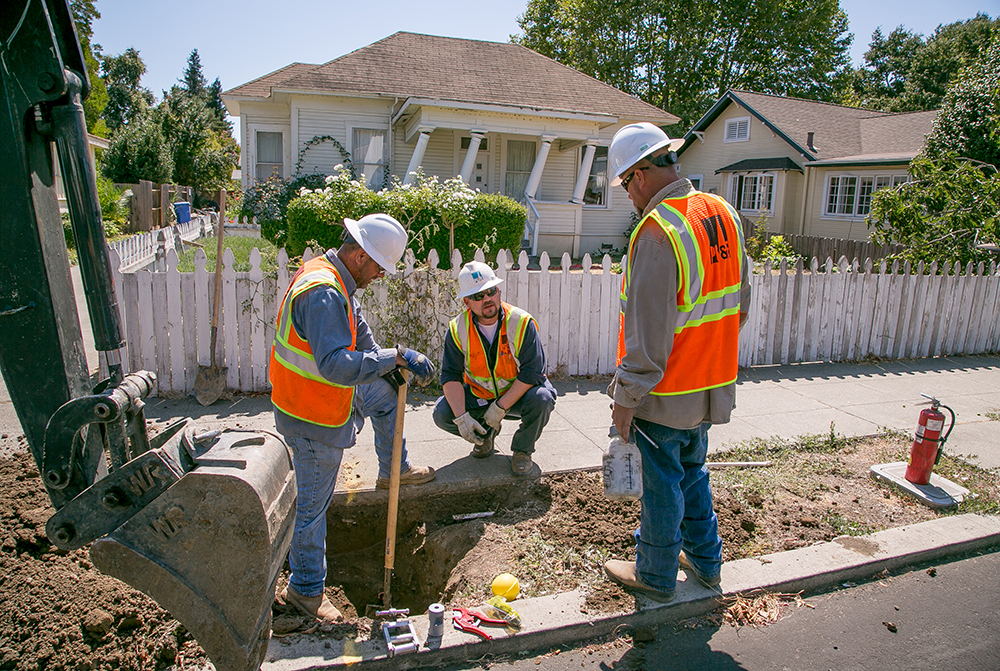 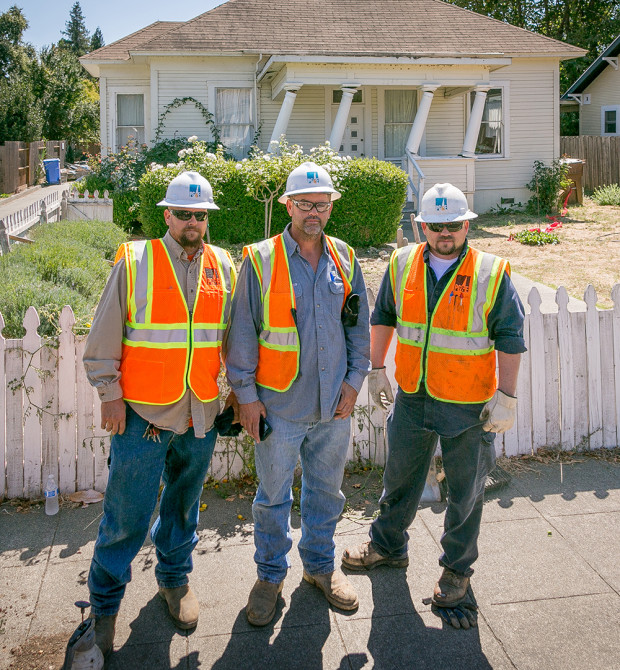 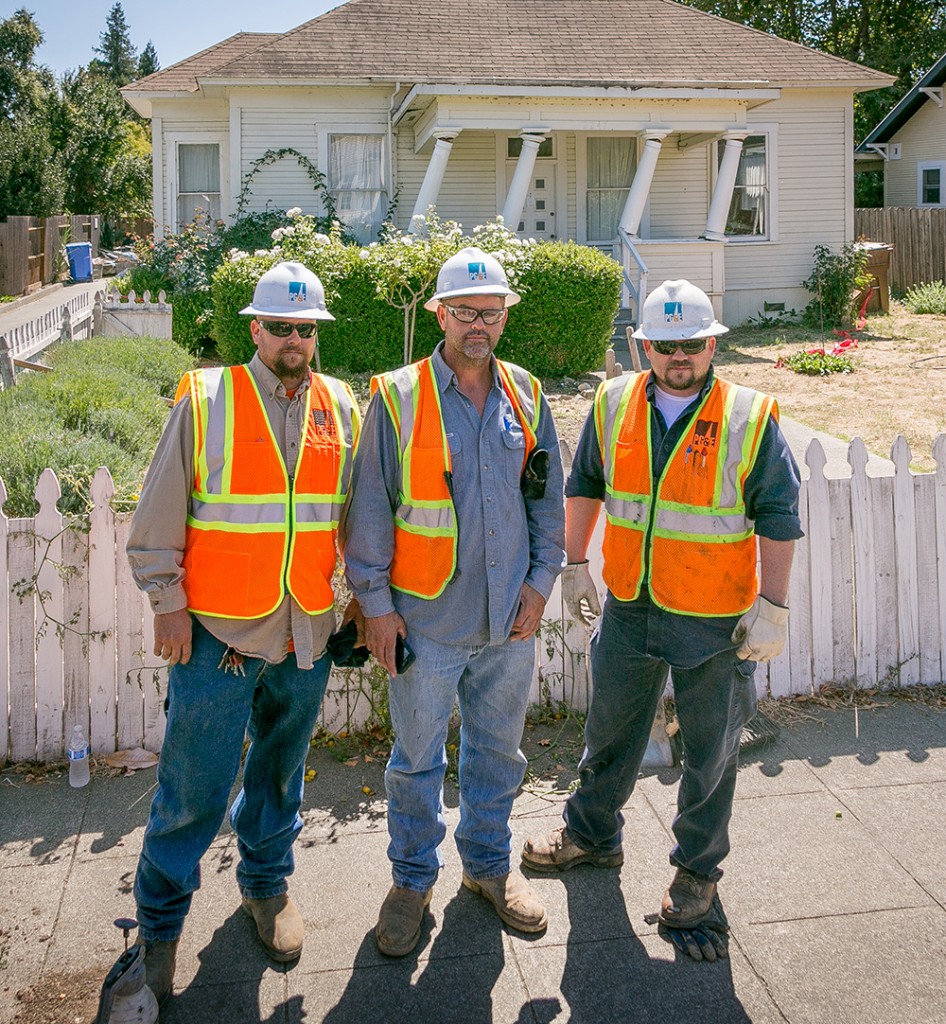 <
►
>
Ron Knepper is ready with his shovel as the dig begins at the damaged home near First and Seymor in Napa.

IBEW 1245 members swarmed across the Napa area in the hours after the 6.0 magnitude earthquake on Aug. 24, responding to over 400 PG&E customer calls of gas odors. In many cases, a visit by a gas serviceman was all it took to address the problem.

But things were a little more serious at a house near the intersection of First and Seymor in Napa when Gas Service Representative Darren Nelson arrived. The pillars holding up the roof of the front porch were canted far to the right…and occasionally creaking loud enough to be heard from the street.

“I guess there were a multitude of calls on the same leak. The house slipped off the foundation and ripped the manifold apart,” said Nelson, a six-year member of IBEW 1245.

“I was scared it was going to take the service out and shear off the other riser in the process so I called in for a crew to get it capped off,” he said. “If that house goes, it’s going to shear the riser off, so they’re going to cap it off inside the property (line) or at the street.”

Nelson had been called in the wee hours to come help in Napa after working until midnight in Stockton, where he is based. As soon as Gas Crew Foreman Joe Goldstein’s crew arrived to deal with the creaking house, Nelson rushed off to the next trouble spot before we could even get his picture. The crew from Concord, from lft: Brad Matlock, Ron Knepper, and Joe Goldstein.

Goldstein used a pipe locator to quickly locate where to dig, Equipment Operator Brad Matlock broke the surface with a backhoe, and Gas Crew Lead — Welder Ron Knepper hand-shoveled down to the line. Goldstein installed the cap, securing the line.

All three men had driven up to Napa from Concord after receiving calls at about 5:00 a.m. Soon they too would be racing off to the next problem. Asked how long he expected to be working on this emergency, Matlock said: “We work til everybody’s back.”

The earthquake was a prescription for long hours. Gas Service Representative Roger Shields, a two-year IBEW member, was called out at 8:30 a.m. from Windsor and put in close to 16 hours.

“I got to the hotel at midnight and left the hotel at 7 a.m. this (Monday) morning,” said Shields, still on emergency duty.

Roads in Napa and Sonoma counties were thick with Fire Department red and PG&E blue in the hours after the quake. PG&E dispatched 40 electric crews and an armada of gas service trucks to the area, and IBEW members were ready to put muscle behind PG&E’s promise of service and safety.

Of 70,000 customers who were out of power at the peak of the earthquake emergency, all were restored to service by Monday noon, according to PGEcurrents.com.

An initial safety patrol of PG&E’s gas transmission pipeline did not indicate any damage. The company said it planned to perform a second patrol.

PG&E also began courtesy gas safety checks at homes and businesses across the impacted area on Aug. 25, the day after the quake.

Queen of the Valley Medical Center in Napa reported treating 208 people for injuries. In Napa, 49 buildings have been red tagged, meaning they are too dangerous for people to enter, and another 100 or so have been yellow tagged, meaning that residents or business owners may enter for limited purposes only. The City of Vallejo reported damaged to 41 buildings.

The temblor was the largest in the Bay Area since the 1989 Loma Prieta earthquake.