The measure of our life can be summed up by the richness of our retirement years. In our youth, many of us struggled for self-sufficiency. Our goal back then was to find a job, buy a home, raise our children and improve our job skills. Most of us did not have the time nor the… [Read More]

Human nature provides us a license to complain about our circumstances, no matter the quality of our life.  As a retired union member my urge, to criticize, is muted by the economic security I enjoy. We learned long ago that, without an opposing force, employers will short change our wages and our personal safety.  The… [Read More] 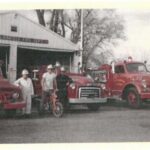 At 82 years young, Ed Beoshanz is one of many IBEW 1245 dues-paying retirees who has chosen to stay involved with the union during their retirement years. An active member of his community, Beoshanz lives in Davis, California, on an 80-acre farm that has been in his family and operating for over 100 years. He… [Read More] 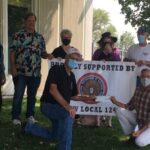 IBEW 1245’s Reno-Sparks Retirees Club made a $350 donation to support the Washoe County Meals on Wheels program. The matching funds used for this donation were approved by IBEW 1245’s executive board. Meals on Wheels is dedicated to addressing senior isolation and hunger. This network serves virtually every community in America and, along with more… [Read More] 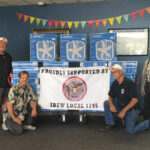 In what has become an annual tradition, the IBEW 1245 Reno-Sparks Retirees Club collected and donated 39 fans for needy senior citizens in Washoe County. Club President Ron Borst started the fan drive back in 2015 after hearing a radio ad about low income seniors suffering during the hot summer months (temps often exceed 100… [Read More]

Liberty is a fundamental principle of life. It is uniquely individual, but must include all.  It is nonpartisan and accepts all beliefs. Because it is so embedded into the fabric of our lives, it is easy to take for granted. To perpetuate liberty, it must be nurtured and we can never lose sight of its… [Read More] 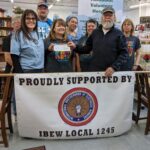 The Winnemucca Battle Mountain IBEW 1245 Retirees Club presented a check for $300 to Humboldt Volunteer Hospice, a local organization involved in end-of-life care in the Winnemucca community. “Local 1245 was instrumental in financially supporting this community donation,” said Michael Dean of the Retirees Club. “Many thanks go out to all those who support this… [Read More]

Personal freedom is the underpinning of many the core values of our lives.  But freedom does not exist in a vacuum or in isolation.  Freedom is an offshoot of Democracy and it must be available to all.  Without the freedom to determine their own destiny, workers would find it difficult to have a voice in… [Read More] 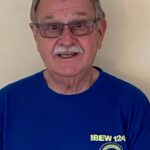 I have stayed a member of the retirees club because I truly enjoy the camaraderie of my union brothers and sisters who I worked alongside of for so many years.  I know that they share the same values of hard work, dedication, and safety that we proudly displayed in the workforce and in our current… [Read More]

Having grown up in a middle-class union household, in a middle-class union neighborhood, I just thought everyone that was employed, was a union member. Back in the fifties, sixties and early seventies, that was, for the most part, true. My parents raised their three children on one union income. We lived in a modest home… [Read More]